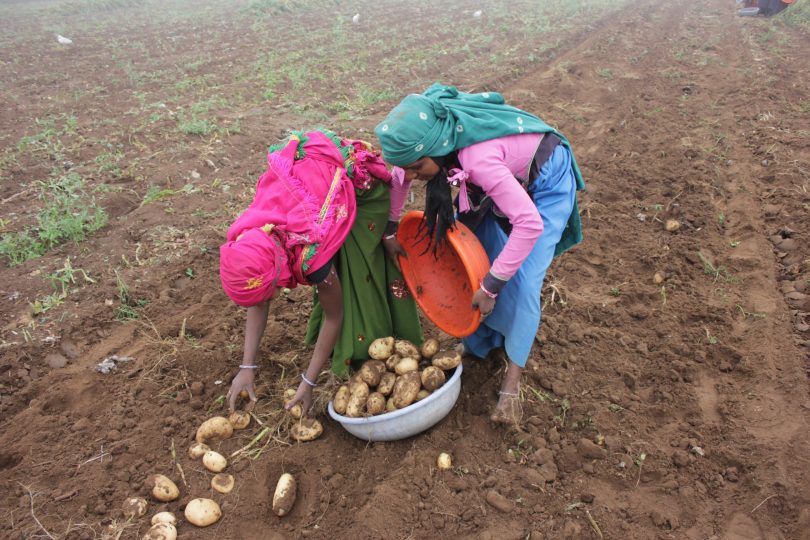 The Gujarat government should broker a settlement between PepsiCo and the farmers, the food and beverages company has sued for allegedly violating its intellectual property rights (IPR) in a registered potato variety, and not make it a nationalist versus multinational issue, says Vivian Fernandes.

This is because, if PepsiCo cannot enforce its IPR, Indian farmers will lose out in the long run. At the same time, it might be difficult for the company to prove that the farmers it has sued have committed illegality. Seeking damages of Rs 1 cr from each of them is also bad optics.

According to news reports, Gujarat’s Deputy Chief Minister Nitin Patel has announced that the state government would intervene in the suit on behalf of the farmers. This might help the government assert its “swadeshi’ credentials and blunt the criticism it has faced from Congress leader Ahmed Patel, who has reportedly said the government must not keep “its eyes shut” to PepsiCo’s “brazenly wrong” action.

The private dispute between the company and farmers became a political issue after 192 organisations publicly urged PepsiCo to withdraw its suit.

PepsiCo is prosecuting nine farmers of Sabarkantha and Aravalli districts for growing FC 5, a wafer-quality potato variety registered under the Protection of Plant Varieties and Farmers’ Rights (PPVFR) Act. They are not its contract farmers.

The PPVFR Act is a unique Indian law passed in 2001 to protect the rights of farmers and communities in plant varieties with desirable traits, which they have conserved over the years. It also protects the rights of breeders who have crafted commercially-useful varieties. New varieties are registered under the Act if they are distinct, uniform and stable (DUS).

PepsiCo got PPVFRA registration for FC 5 in 2016 after passing the DUS trials, which were conducted by the Central Potato Research Institute (CPRI), Shimla. FC5 is high-yielding and has attributes, like high dry matter and low levels of reducing sugars that make it apt for frying.

PepsiCo’s spokesperson said the variety is meant for captive use; it supplies the seed only to its contract farmers of which they are 24,000 across multiple states. At 3 lakh tonnes annually, he says,  it is the biggest buyer of processing-quality potatoes.

According to the spokesperson, contract farmers get the FC 5 seed for Rs 20-25 per kg, depending on the size. They have to return 11-13 times the quantity at about Rs 10 a kg. The purchase price is fixed at the time of contract and holds even if when open market prices are lower. Half the price of the seed has to be paid up front. The rest is deducted from the sale value. PepsiCo accepts potatoes that are more than 45 mm in diameter. Defects cannot exceed 15 percent.

PepsiCo says the farmers it has sued were found to be growing FC 5. It provided evidence of the samples it had obtained from their fields. These have tested positive. The court found PepsiCo’s complaint had merit and gave an injunction in its favour.

Two of the sued farmers said there were not aware that the variety they were growing was FC5.  Bipinbhai Badolkampa of Lakshmanpura village in Vadali taluka of Sabarkantha district said he got the seed from his friends’ circle. He challenged PepsiCo to prove that the sample presented in court was from his field. Haribhai Patel of Medhkampa village in Vadali taluka said he didn’t know why PepsiCo has sent him a legal notice. He disclaimed any knowledge of FC 5.

Fulchand Kachchhava, a buyer for Balaji Wafers, said PepsiCo has also served him a legal notice. Based in Deesa, Banaskantha, Kachchhava has cold storages and is a big trader. His annual procurement is said to be 40,000 tonnes. His said his family grew potatoes on 150 acres. The varieties planted were Lady Rosetta and ATL. The former is a royalty-free variety that was developed by the Dutch breeding company, Meijer. It has blush skin and is quite popular among farmers growing potatoes for chips. ATL or Atlantic is another royalty-free US variety also meant for chips.  “There is no difference between FC 5 and ATL,” Kachchhava says.

Parthibhai Chaudhary, a retired police official and large farmer, says ATL and FC 5 are “same to same.” Based in Banaskantha he grows potatoes scientifically on 87 acres and has won awards for high yields. Chaudhary says he had planted ATL and Lady Rosetta in the last season.

Vinay Bhardwaj, Head of the Department of Crop Improvement at CPRI disagrees. He says the genetic fingerprints of ATL and FC 5 are different. While doing the DUS trials on FC 5, ATL was used as the check variety for comparison, he says.

Anand Yagnik, the lawyer for the sued farmers from Sabarkantha mentioned above, said his clients saw no competitive advantage in FC 5. They were not interested in growing any protected variety in violation of the law. The seed they had planted was obtained through “customary and conventional methods from friends and relatives. “We are not interested in FC 5 over which they claim registration.”

The PPVFR Act gives the farmers wide latitude. It allows them to save, use, sow, re-sow, exchange, share and even sell farm produce including seed of a protected variety. The only caveat is that a protected variety, when sold, cannot be packaged and branded as such.

The International Union for the Protection of New Variety of Plants (UPOV), which is based in Geneva, objects to this ‘brown bagging’ provision because it dilutes IPR protection. Indian law also does not make a distinction between small and large farmers. But those supporting farmers’ rights say brown bag sales happen on trust and buyers do not have legal recourse if they are short-changed. So, only small volume sales can happen.

PepsiCo might find it hard to prove that the farmers it is prosecuting obtained the seeds illegally even if it establishes that they planted its protected variety without a contract. The suit has dented its image. Seeking Rs 1 cr in damages from each of the smallholder farmers is bad optics. The company will be perceived as high-handed. It should have ignored the small fry or sought token damages from them to send a warning message to the wider community.  However, few will object if it prosecutes traders.

Haresh Karamchandani, the CEO of Hyfun Foods, which exports, and supplies potato products to Burger King and KFC, says if PepsiCo cannot enforce its IPR, farmers will be deprived of proprietary varieties that give India a competitive edge in the world market. The company has a processing plant at Mehsana and 5,500 farmers on contract. Though India is the second largest producer of potatoes, it exports and processes a fraction, he says. There are huge opportunities in both areas, but IPR protection is necessary to tap them.  Karamchandani cites the reluctance of Meijer to introduce Lady Anna, its French fries variety, to India owing to weak IPR protection.

But farmers also have a point, Karamchandani says. They cannot throw away the undersize potatoes of varieties (including protected ones) which the contract buyers reject. They will save some for own use; the rest they will sell for consumption or as seed. Such sales are kosher, he says, because the contract buyers got the right of first refusal.

Ram Kaundinya, Director-General of the Federation of Seed Industry of India (FSII) says loopholes in the PPVFR Act must be plugged. They are being misused by some in the seed industry to avoid paying royalties or to sell seed that is not approved by regulators.

In a statement, PepsiCo has offered to settle. It wants to buy the FC 5 harvest of the farmers it has sued and has given them the choice of being its contract suppliers. For PepsiCo inaction was not an option. But it should have chosen its strike targets carefully.