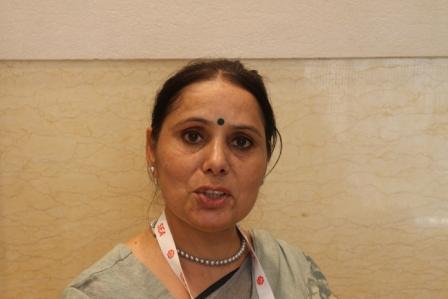 Vivian Fernandes brings a voice from Punjab Agricultural University which did the biosafety trials on Deepak Pental’s GM mustard hybrid.

“We should release it, we should put it in the public domain, whatever the hue and cry is there, there is no scientific evidence for that,” says Surinder Sandhu about the genetically-modified mustard hybrid, DMH-11, which is parked in the ante-room of Environment Minister Harsh Vardhan, awaiting his approval for commercial cultivation, since May last year. Sandhu is Principal Scientist and In-charge of oilseeds at Punjab Agricultural University (PAU), which she joined three years ago after working at the Central Potato Reseach Centre, Jalandhar.

Dhara Mustard Hybrid-11 was developed by a team of Delhi University scientists led by the geneticist Deepak Pental.

PAU did the Biosafety Research Level-1 and Level II trials on the mustard hybrid. “I was not involved personally. I have seen the reports. There was enhancement in productivity,” says Sandhu. “We are getting a very stable, very fool-proof pollination control system.”

Mustard is a self-pollinating plant. For cross-pollination, it has to be made male sterile first. In the conventional method, called CMS, male sterility breaks down at very low temperature. It is also not possible to get 100 percent hybrid seeds. There is a percentage of sterile seeds, which results in loss of yield. “Here we have a very stable, very fool-proof pollination control system,” says Sandhu.

Vardhan has been wary of acting on the advice of the Genetic Engineering Appraisal Committee (GEAC) which not only recommended release of the hybrid for cultivation but also reiterated its stand. He is unwilling or unable to push it, either out of the conviction that GM technology is unsafe or out of expediency, as there is opposition from within the ruling party.  Whatever the reasons, to accommodate Vardhan’s sensitivity, the GEAC has asked Pental to conduct trials at multiple locations on honeybees.  It just might be a stalling tactic to provide wiggle room to the minister till the next general elections.

Sandhu says “our entomologist who was involved in that, he was a partner and his duty was to see whether bees’ vegetation gets affected, whether there is no nectar, and there is any repulsion and it was like the conventional mustard varieties, there was no anomaly at all.”

Sandhu was speaking as a scientist at the conclave on rapeseed-mustard in Jaipur on 8 July. Her intention was not to enter into a political debate. She was not trying to contradict the minister but merely expressing her views based on evidence. Hers is not a lone voice. The National Academy of Agricultural Sciences has passed a resolution calling on the government not to heed the opposition of the anti-GM activists but act on the advice of the GEAC.