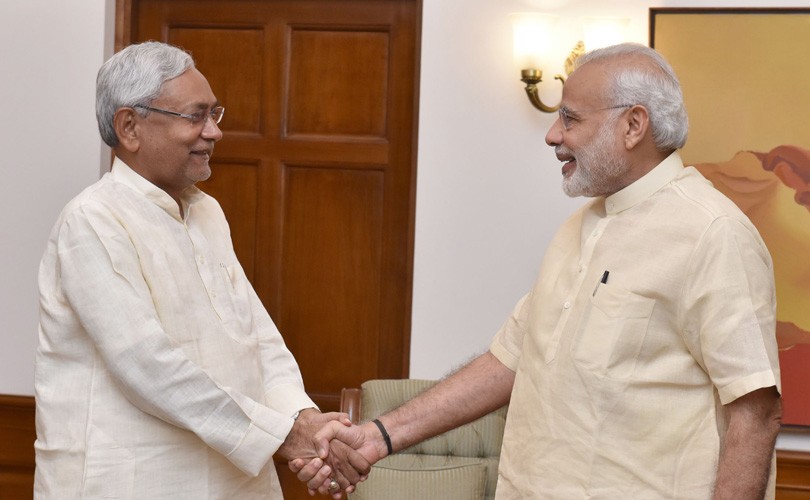 In his 6 October letter, Bihar’s Chief Minister doubts the integrity of the regulators, calls genetic engineering of crop plants a dubious and hazardous technology, suspects the Delhi University team which developed the hybrid is fronting for a multinational producer of herbicides and disbelieves yield claims. For Kumar any assessment of GM mustard hybrid DMH-11 that is not adverse cannot be objective, reports Vivian Fernandes. Here is his letter reproduced as is, without any editing.

I have been informed that a technical panel of the Genetic Engineering Appraisal Committee (GEAC) has cleared GM mustard as safe for human and animal consumption. If approved, this would be a gateway to not only GM mustard, the first such food crop in Indian fields, but to a host of several genetically-modified food crops being developed by public as well as private-research bodies These include GM maize, rice, brinjal, wheat, tomato among others which are at various stages of the approval process.

GM mustard is a herbicide tolerant (HT) crop. Any gene making the plant resistant to a herbicide locks farmers into using select brands of agro-chemicals. The full adverse implications of HT crops are apparent world over. It is unclear why this herbicide tolerant (HT) GM mustard which seeks to promote itself as a hybridization technology, is even being considered by the Government of India, when we already have non-GM hybrids available. I have already writen to Union Forest Minister in January 2016 pointing out that when the interested parties have failed to win the confidence of the farmers of the country, they are pushing the technology through public institutions. It is surprising that this so-called public sector GM mustard came into being one year after a MNC’s GM mustard was rejected by the Indian regulators in 2002. The MNC whose product has been rejected will stand to gain by the herbicide tolerance trait in the current GM mustard. The MNC reportedly holds Intellectual Property Rights (IPRs) on the genes used in developing this GM mustard.

In my earlier communications, I have pointed out the conflicting claims of the superiority of this GM mustard variety. There are now ample proof provided by both ICAR’s own Directorate of Rapeseed Mustard Research (DRMR) in Bharatpur and civil society experts that the testing was deliberately misleading so as to obtain favourable results for GM mustard. This GM mustard was tested against 40-year old varieties. In fact, it is similar in yield with latest public and private sector mustard hybrids and varieties. It has not been tested against other non-GM hybrids. The sorry state of regulatory assessment is once again showcased by this GM mustard as has happened with Bt brinjal.  Earlier too in 2010, the GEAC had cleared Bt brinjal but its decision over-ruled by the then Union Environment Minister.

As per some media reports it appears that conflict of interest plagues the decision making system, in addition to the fact that all requisite areas of expertise are not present in the Regulatory Bodies. This then points to the lack of liability of assessment in decision making related to GMOs.

Bt cotton, which has been cultivated in the country for 15 years now, demonstrates amply that GM is a failed technology.  Bollworm, a cotton pest for which GM technology was brought in for pest control, has developed resistance against the Bt toxin and is able to survive and wreak havoc on Bt cotton crop. Thousands of farmers have incurred losses in the country due to this.

Government of Bihar has consistently made its position clear on GM technology: our rejetion of Bt brinjal field trail on the advice of scientists and State Farmers’ Commission in 2009 (vide D.O. no. 4610442/CMS dated 08.1.2009); our rejection of Bt brinjal when GEAC cleared it, in 2010; cancellation of a clandestine GM maize trial in 2011, which was subsequently hurriedly uprooted without adequate scientific care ─ our refusal of the trial was communicated to Union Ministry of Environment and Forest; our letter to Hon’ble Prime Minister to make sure that the provision of prior consent of State Government for any GM field trial will not be removed and to make a permanent arrangement for mandatory consultation and consent of the State Government for laying any trial of GM crops (vide D.O. no. 4610040/CMS dated 07.03.2012) etc. We were informed by the then Union Environment Minister (State Minister Independent Charge) that NOC from the State Government is mandatory prior to conduct of GM field trial vide her letter dated 10.12.2021. However, in a recent meeting of GEAC (129th meeting), the regulatory body took a decision that if a State Government does not respond within 90 days of an application requesting NOC, it will be deemed as a clearance. This is unhealthy and not acceptable. In fact, it should be a system where if no response is received within 90 days, it should be deemed as a rejection of the application.

Bihar government’s policy on this matter is clear and the state supports sustainable agricultural development without resorting to the use of transgenic or other hazardous technologies. Genetically Modified and organic cultivation cannot go together and are incompatible in their approach and regulation. In Bihar, we are investing a lot on the promotion of organic farming and the State has witnessed impressive success. Even the Government of India has recognized the importance of organic farming by initiating the Parmparagat Krishi Vikas Yojna.  The existing technologies developed by the ICAR can boost the oilseed productivity in the country and the dubious GM technology is thoroughly unnecessary.

GM mustard proponents say that India’s dependence on edible oil imports made it necessary to harness GM-mustard. But the issue of increasing edible oil imports has to be understood for its root problem ─that of faulty trade policies that have destroyed our Yellow Revolution which brought about near self-sufficiency in oilseeds. If farmer friendly policies that give remunerative markets to our oilseeds producers are adopted firmly by the Government of India, our farmers are capable of giving as much production as needed.

As I had reiterated in the past too, agriculture is a State Subject as per the Indian Constitution.  You have emphasized on Cooperative Federalism and the need to uphold the federal polity of the country. This issue of GM crops is an important area where this has to be demonstrated urgently. If the Government of India (MOEF) approved GM crops such as GM mustard which is an important crop for states like Bihar ─ we are also the leading producer of honey in India and honey production depends on mustard crop ─ the State will not be able to escape the consequences of the technology. When it comes to food crops, the country has to be particularly cautious. Health impacts on consumers cannot be ruled out given that mustard is consumed in numerous ways.

In this background, I strongly urge you that this GM mustard application which had been cleared by a sub-committee of GEAC must be over-ruled instantaneously. Further, no decision on GM crops should be taken in haste which can harm the interests of the farmers and the people of India at large. The interested parties are trying to push an unproven technology and any dubious technology should not be thrust on the farmers. Despite earlier communication on this subject, the unscientific push for GM mustard approval is continuing. We strongly feel that as per existing policy, the Government of India should mandatorily consult and seek no-objection from the State Government before conducting field trials of any GM crop. I therefore request you to intervene and see that the attempt to commercially release genetically modified mustard variety in the country should not proceed any further, without prior consultation and consent of the State Government.

Why insect-resistant GM crop technology is compatible with organic farming.

Yellow Revolution’s self-sufficiency in edible oil came at a price.