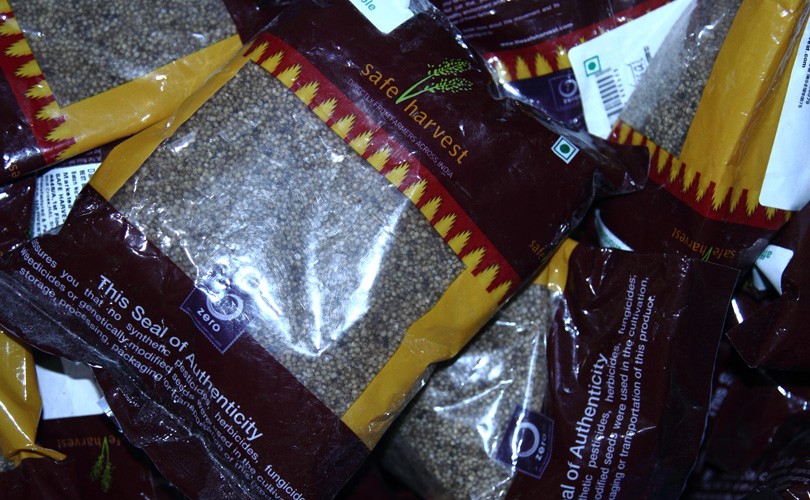 The government is promoting organic farming. But farmers in Sikkim, which was declared India’s first wholly organic farming state, have suffered losses, says a report in the Indian Express. They are not getting premium prices for their produce, which is necessary to compensate for lower yields. As usual marketing is the weak link. It is not even clear whether consumers, other than a faddish minority, are willing to pay more. Vivian Fernandes reports that organic may be suited to arid, semi-arid and hilly regions were high-input agriculture may not be profitable, but the rest of the country should be able to practice chemical-based agriculture with a package of safe practices. This report was first published in the Financial Express

For most consumers “organic” is probably code for “safe” or “residue-free,” not necessarily produce grown without chemical fertilizers and pesticides. But marketers use the tag to tap into a seam of fear in some urban parents who are so anxious about health that they are willing to pay for advertising that spells well-being. A brand of “organic” jaggery on the shelves of Reliance Fresh stores claims to be free of genetically modified organisms (GMO), when GM sugarcane is not even undergoing field trials in the country. Only one variety of cane which has been genetically-engineering for drought tolerance is being tested in India and that too in glass houses at the Sugarcane Breeding Institute of the Indian Council of Agricultural Research (ICAR) in Coimbatore.  Even if it passes the tests it will be years before it jumps the regulatory hoops; perhaps never at all.

“Organic is the result of activism,” says Parag Sinha of NAPL Advisors, a consultant to food parks and dairies. It is a nice tag, he says, but it’s difficult for produce to earn that label unless grown in isolated areas like Sikkim or Arunachal Pradesh.

Sinha was in the business of growing residue-free chilly for export to the European Union (EU) at Khargone in Madhya Pradesh. He says he signed up farmers on contract for 250 acres the first year and 1,250 acres the second year.  Farmers were paid the market price prevailing on the day of purchase, if their produce had residues below the maximum levels permitted by EU. Chilly is prone to pest attacks and needs repeated sprays. A small team advised farmers about the chemicals to use and when to use them. In the third year Sinha contracted 5,000 acres, but ran out of working capital and defaulted on purchases. But prices were high that year, so farmers did not suffer losses. In 2016, Sinha suspended the business after a viral attack as farmers cannot revert to the crop for three years.

Sinha found that 70 percent of produce on average was residue-free. Some farmers cheated. Some others followed the prescribed practices, but their plots were so small they could not escape contamination from neighbouring fields. “Residue-fee farming is not difficult,” Sinha says,” it is not even costlier.”

But for people like Rangu Rao, chemical pesticides are anathema. He considers them environmentally unsustainable; bugs develop resistance to them over time. They also kill beneficial microbes in the soil. And they have to be bought for cash which is financially oppressive for small holder farmers, who have little marketable surplus.

Ideally Rao would want smallholder farmers to grow all they wanted. But they can’t. They have to buy clothes, for instance. So they need cash. He would like them not to use chemical fertilizers. For him they are like steroids. He believes farm yard manure (FYM) can do the trick. But tribal farmers do not own plots large enough to keep cattle. It is also not possible to scour the landscape for enough quantities of the dung of free-range cattle to supply crops the nutrients they need.

Huge quantities of manure would be needed to replace chemical fertilisers. The Indian Institute of Farm System Research near Delhi says FYM is rich in micronutrients and organic carbon but it has just 0.5 percent nitrogen, up to 0.4 percent phosphorus, and 0.3 percent potassium. In comparison, urea has 46 percent nitrogen, single superphosphate is 16 percent phosphorous and muriate of potash 60 percent potassium.

Rao is one of a group of idealists from Jawaharlal Nehru University and Delhi University who, three decades ago decided to work among tribals in MP’s Dewas district. Rao is CEO of Safe Harvest, a company whose chairman is Mihir Shah, former member of the erstwhile Planning Commission.  About two dozen kitchen staples including pulses, rice, spices, millets and wheat flour grown without pesticides are sold under that brand. Safe Harvest buys produce from farmer producer companies and non-governmental organizations who work with farmers. They use neem, garlic and weed extracts to repel or kill pests.

Rao thinks there is a toss-up between high yields and sustainability. He prefers the latter. High-yield agriculture, for him, is risky because it is high in inputs which have to be purchased. Smallholder farmers can be self-contained if they do traditional, non-chemical agriculture.  The Green Revolution, he believes, has helped certain regions and a certain class of farmers. It has been propped up with subsidies. Remove the subsidies, and traditional agriculture will come out superior. Sadly, it isn’t possible to practice truly traditional farming because the country’s agricultural system is geared for high-input agriculture whether in its emphasis of hybrids or advice at Krishi Vigyan Kendras.

Safe Harvest has a list of farmers who have undertaken to follow Non-Pesticide Management (NPM). They have to promise to abide by the entire protocol. There is a system of regular audits. A diary is maintained for each farmer.

Are customers willing to spend more for organic? Big Basket, an online grocer, says it wants to be entirely organic as that is where fussy customers seem to be heading. But when it charged a premium, sales dropped so it settled for a mark-up of about 10 percent over conventionally grown fruits and vegetables that account for the bulk of its sales.

In January 2016, the Prime Minister declared Sikkim as a wholly organic state, the only one in India. But a report in the Indian Express in October, says its farmers have come to grief as they are being under-cut by non-organic produce from West Bengal.  A farm in Sikkim which yielded 40 quintals of tomatoes with chemical fertilizers is now giving 18-20 kg. The producer wanted at least Rs 60 a kg but with non-organic tomatoes selling for less, he has few buyers at that price.

As a relatively isolated state, Sikkim has natural advantages for organic farming. But it will not be sustainable unless farmers profit from it.  This has lessons for the agriculture ministry at the centre which is pushing organic farming because it conjures up images of tradition and a pristine past. For the left parties, chemical equals corporate, which is a red rag. It is time to take the dogma out of agriculture and see it for what it is: a business and a livelihood. Chemical need not mean contaminated if protocols of use are observed.

Link to the Financial Express report