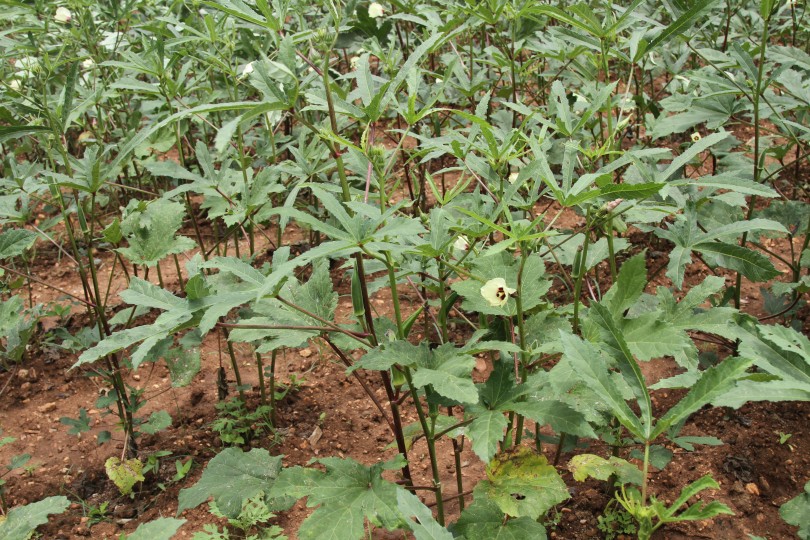 Sathya Raghu, the author of this article, is a chartered accountant and worked with PriceWaterhouseCoopers, a consultancy. In 2009 he quit the job and took a shine to agriculture. With friends he set up Cosmos Green and grew guar beans in Raichur, Karnataka. Currently, he works with a 250-member farmer producer company in Shahabad which supplies to organic food stores in Hyderabad. He is also engaged with about 15 farmer producer companies.

Reshma, a 22-year-old smallholder farmer outside Hyderabad, nourishes her farm with cow dung hoping to get a good yield. She is among a growing number of farmers in India who have shifted from conventional to organic farming in anticipation of premium returns and healthy farms. They have substituted chemical fertilizers with natural materials like neem cake and cow dung. Instead of chemical sprays they use bio-pesticides like neem oil. They want to compete in the global market for organic produce, which is worth about $64 billion.

To her rude surprise, Reshma’s yields dropped to half in the first year and her profit fell to less than a one tenth of what she made before the switch. The second year saw a marginal increase in yield; her savings improved to about a third of the pre-organic returns. She is yet to get the premium she hoped for as her farm is not yet wholly “organic.”

Inputs for organic farming are cheaper but farmers who are new to it need elaborate guidance. Talk of sustainable agriculture is fine, but what use is it to Reshma if she cannot earn enough for two square meals a day?

Organic farming promises a lot: it reduces the detrimental effects of conventional chemical-based farming while cutting input costs, fetching a premium price for produce, improving soil fertility, promoting efficient use of water, and providing safe food for consumers. But having worked closely with 8,000 farmers like Reshma in different capacities, I know the reality does not measure up to the promise.

While it has a place in Indian agriculture, organic farming is not a viable option for smallholder farmers. Imposing it on them, I believe, can do more harm than good.

First let’s address the claim that organic farmers will get higher returns as a result of lower costs and higher prices. While inputs like bio-fertilizers and manure are indeed cheaper than chemical substitutes, we should not ignore the true costs and risks involved.

In the initial years yields will typically plummet because of lower yield. The lost income cancels out the savings from cheaper inputs. After detoxing the soil, which takes up to three years, farmers will have to pay the equivalent of $450-600 (Rs 30,000-40,000) a year to obtain organic certification. This is a significant cost for farmers like Reshma who hope to earn about $100-120 (Rs 6,500-8,000) a month. During the transition, farmers cannot get premium rates because their farms are not fully “organic.”

Organic farmers are dependent on niche urban and export markets.  To access these, they have to tie-up with large companies who will skim much of the premium price retailers will pay. To retain a larger share of the retail price, smallholder farmers will have to form collectives to enhance their bargaining power with sellers of inputs, lenders of credit or buyers of produce. State help will be needed. The government has a scheme to subsidise the cost of certification for small groups of organic farmers. That is a good move.

Organic farming is supposed to be inherently safer and healthier. But because the industry is young and not well-regulated in India, not-so-safe practices are followed. For example, farmyard manure may contain toxic chemicals and heavy metals. Certain plant sprays, such as datura flower and leaf spray, have atropine which can act on the nervous system. If applied indiscriminately, it can even cause cardiac arrest and paralysis.

There is a lot that can be done to make food safe and farming sustainable without going fully organic.  Farmers should be educated to use prescribed agro-chemicals in specified doses and within safe time lines (say, not too close to harvesting).  Instead of pushing farmers like Reshma to risk it all with organic farming,  we need to strike a middle path. That way farmers can thrive without harming human and animal health and damaging the environment.

(The author can be reached on raghumokkapati@gmail.com)