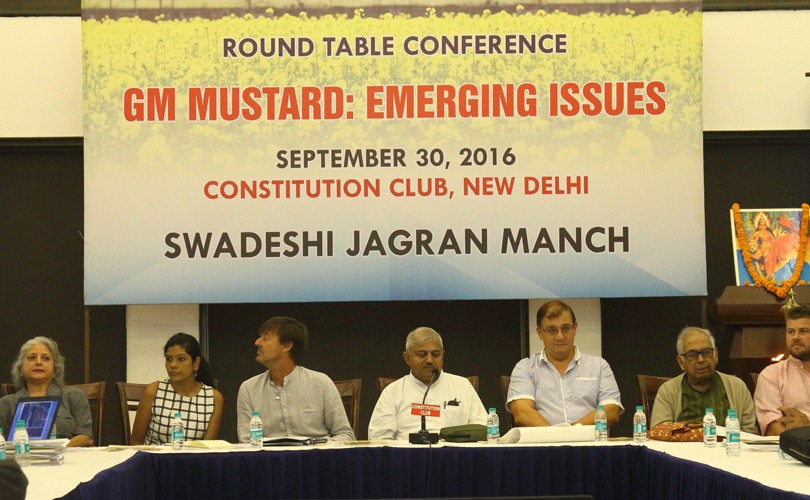 Those opposing GM mustard are making every effort to block the release of GM mustard to farmers, reports Vivian Fernandes, even as the environment ministry has reiterated the 5 October deadline for receipt of public comments.

Leftists made common cause with right-wingers at a workshop in Delhi on 30 September comprising entirely of sympathizers to block the approval of genetically-modified mustard including possibly seeking the Supreme Court’s intervention if permission is given for commercial cultivation of the hybrid.

Dhara Mustard Hybrid 11 (DMH-11)  has been developed by a team of Delhi University scientists led by geneticist and former vice-chancellor of the University, Deepak Pental with funding from the National Dairy Development Board and the Department of Biotechnology.

Ashwani Mahajan, National co-convenor of the Swardeshi Jagran Manch (SJM), which organised the event, said ‘in inviting speakers we have not looked at the colour of their ideologies.’   The country does not need GM mustard, he said, because ‘it will impact our vanaspati, our agriculture, our biodiversity, our bees.’  SJM is an affiliate of the Rashtriya Swayamsevak Sangh (RSS), the ideological mentor of the ruling party.

The irony of an outfit espousing swadeshi or national self-reliance inviting a videshi or French scientist like Gilles-Eric Seralini was not lost of GM technology advocacies like South Asia Biotechnology Centre (SABC) and ABLE-AG, the association of biotech companies.  C D Mayee, President of SABC said it was  ‘unethical’ of Seralini to criticize an ‘indigenous scientific endeavour’ and ‘derail a Make-in-India product.’

Seralini’s paper on the toxicity of GM maize and Roundup, Monsanto’s weedicide brand, and tumours in rats was published in Food and Chemical Toxicology in November 2012. It was later withdrawn by publisher Elsevier for being inconclusive (not necessarily incorrect).

In his comments to SABC, Marc Van Montagu, the Belgian scientist credited with the discovery of  a mechanism for transfer of genes between agrobacterium and plants said it was a ’shame’ that Seralini continued to denounce GM crop technology even after retracting his paper on tumours in rats.

Seralini’s paper was the basis for environment minister Jairam Ramesh declaring a moratorium on Bt brinjal in 2010 (though Seralini’s retraction came later). C Kameshwara Rao of Bengaluru’s Foundation for Biotechnology Awareness and Education says Seralini was commissioned by Greenpeace, an NGO vehemently opposed to GM crop technology, to evaluate the Bt brinjal dossier.

‘Seralini is a fighter,’ Mahajan said. ‘He has fought his case and won everywhere.’

For Vandana Shiva, a well-known crusader against GM crop technology, the quibbles with GM mustard were ‘not an issue of technicality. It is about the integrity of science and our conscience.’

Shiva said no feeding trials has been done on DMH-11. According to her, the developers cited Canada which does not require such trials. Canada had developed GM rapeseed (called canola) in 1996 using the same technology. Shiva says Canada cannot be a model for India, because canola oil is used there as fuel, while mustard is eaten in India as oil, vegetable and animal feed.

Shiva charged Pental with fronting for Bayer, the German multinational which is acquiring Monsanto, the leader in GM crop technology, because DMH-11 is resistant to glufosinate, a weedicide, which Bayer sells as Basta. ‘This is Bayer’s mustard and all patents are with Bayer,’ she asserted.  Pental’s hybrid was a re-packaged version of Bayer’s GM mustard rejected by the regulators in 2002, she said.  Pental, in her view, was not only doing ‘fraud science’ but topping it up with ‘fraud swadeshi.’  (To read Pental’s earlier refutation of Shiva’s accusations click here).

Aruna Rodrigues, the lead petitioner  in a Supreme court suit seeking a moratorium on  GM crops elaborated on ‘three regulatory frauds’ which Pental is alleged to have committed. These were a repeat of charges made by anti-GM activists at a press conference in the first week of September. She said the use of the term ‘Barnase Barstar system’ to induce male sterility in self-pollinating mustard so it can be cross pollinated was ‘a camouflage’ to hide the real intent of making the hybrid herbicide tolerant with the bar gene, in order to promote sales of Bayer’s weedicide. She questioned the yield increases cited by Pental, said not enough trials had been conducted and the results of the trials had been cherry-picked to make the hybrid seem more productive that it actually is. She also questioned the use of GM technology to create male sterility in mustard when non-GM cytoplasmic male sterility is as effective.  Pental says his team had tried the latter for hybrid seed production, but genetic engineering gave better results.

Advocate Prashant Bhushan, counsel for Rodrigues accused the Genetic Engineering Appraisal Committee (GEAC) of being in cahoots with corporates.  Bhushan was beaten up by right-wingers in October 2011 for demanding a plebiscite in Kashmir. Another speaker, Pushpa M Bhargava, founder of Hyderabad’s Centre for Cellular and Molecular Biology (CCMB) and a member of GEAC, had reportedly returned his Padma Bhushan award in October 2015 to protest the rising intolerance against minorities. That they should attend an event hosted by SJM shows how passionately opposed they are to GM crop technology and their mainly multinational sponsors.

Bhushan suspected that GM mustard was ‘on the verge of commercialization’ with the GEAC being in favour despite the Supreme Court’s Technical Expert Commitee saying ‘it will take 10 years to fix the broken regulatory system for testing and approval of GM products’. A parliamentary committee (headed by Marxist leader Basudeb Acharia, an opponent of multinationals and GM crop technology ) was also of the same view. Even though the Supreme Court had said all biosafety tests must be made public so independent scientists could evaluate them, Bhushan said his request for a copy of the docket was answered with an invitation to visit the Ministry of Environment where a copy had been kept.

Sachin Chaturvedi, Director of RIS, a Delhi-based research organization, said his outfit has prepared a framework for studying the socio-economic impact of GM crop technology. This has been presented to the Ministry of Environment, which had engaged it on the directions of the Supreme Court. Chaturvedi said such a study must precede approval of GM crops for cultivation and form the basis of public consultations. He pointed to the lack of independent studies on the efficacy and impact of Bt cotton, the only genetically-engineered crop allowed to be cultivated in India. Of 255 studies, he said, about 200 were sponsored ones.