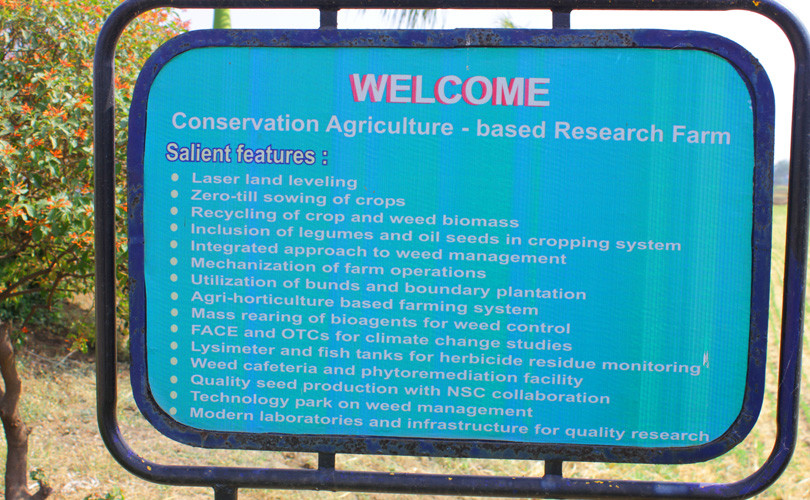 Preaching and legal action alone will not stop farmers from burning straw, says Raj Gupta, who is team leader for regional station development with the Borlaug Institute for South Asia. He advocates credits earned by sequestering carbon through conservation agriculture as an incentive. This piece was contributed on request.

India generates about 500 to 650 million tonnes of crop waste every year. Rice and wheat contribute forty eight percent and thirty two percent of this respectively. Much of this is produced in Punjab, Haryana and western Uttar Pradesh. Seventy five percent of the area here is combine-harvested.

Combines are efficient in cutting and threshing but they leave behind stubble about a foot high, and raked hay called windrows about twelve feet wide and a foot high. This makes ploughing difficult. Shredders help but are not commonplace. Shredding is difficult in the morning when hay is wet. Shredded straw can be ploughed under. But farmers prefer fire; it does a neat job.

Wheat straw is preferred fodder. Farmers do not usually burn it. In rain-fed areas jowar and bajra stalks are not burned either. Cotton stalks are used as household fuel. Basmati is hand-mown to prevent breakage and the straw is used to pack sanitary ware.  It is combine harvested common rice hay that is usually left behind in fields.

Mechanization and reduced dependence on draught animals decreases the need for fodder. Straw and stalks can fire boilers in factories or power plants. But the price may not justify high wages and transportation costs.

Fields lose nutrients when crop waste is repeatedly burned in them. Every hectare gets depleted of eight kg of nitrogen, one kg of phosphorous, twenty kg of potassium, one kg of sulphur and four kg of calcium.  The population of microbes decreases. Soil becomes loose and prone to wind erosion.

Straw and stalks when retained in fields bring down surface temperature and wind speed. This can reduce evaporation losses by as much as 0.39 millimetres a day.  They also improve plant nitrogen absorption.

Farmer can retain straw and cultivate without tilling with special machines like multi-crop zero till seeders or modified Happy seeders, which part the hay to sow the seed. Adding a leguminous crop to say, the rice-wheat cycle, enriches the soil with atmospheric nitrogen and allows ‘sustainable intensification.’ This cultivation practice is called conservation agriculture.

This method of cultivation requires the application of pre-emergent herbicides to kill weeds before sowing. If herbicides are priced appropriately, ploughing can be made relatively uneconomical and unattractive. They can be subsidized as well without falling foul of international rules that prohibit trade-distorting subsidies. Brazil promoted conservation agriculture in the 1990s with these ‘Green Box’ subsidies. There is no reason why India should not.

Of course farmers practising conservation agriculture might get anxious initially because crops in mulched fields tend to grow slowly at first.  They will also have to learn to apply nitrogenous fertiliser in fields that have a topping of crop waste.

Legal action and preaching alone will not bring about change. The responsibility for not polluting the air should not be entirely that of farmers. Carbon credits should be given to those in the Indo-Gangetic Plains for sequestering carbon, improving soil health with organic carbon, cutting down emission of green house gases and reducing fossil fuel usage. These credits  should be available to those in eastern and central India for bringing kharif and rice fallows under cultivation. The credits can be sold to industries that have an obligation to limit their pollution levels, like coal-fired power plantsl. They can also be used to create a fund to pay for research in farmers’ participation in CA-based CO2-mitigating initiative.