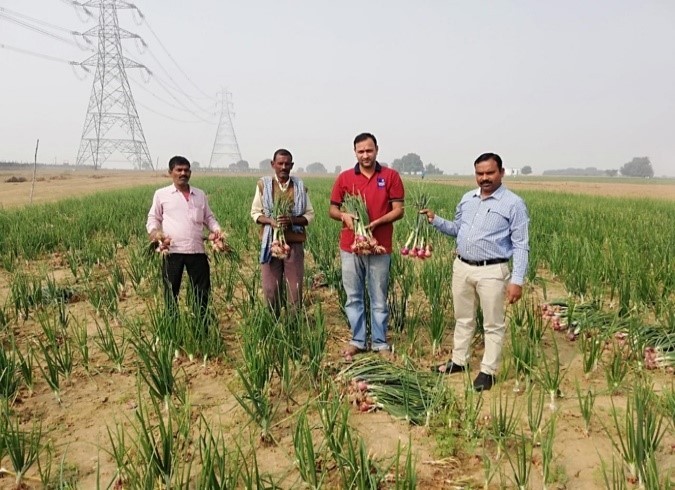 Diversifying the areas of production to northern India, adopting raised-bed planting practice along with drip irrigation and reducing losses with better storage technology can help in averting episodes of price slumps and spikes that afflict the onion trade.

Sixty percent of onion supply comes from the Rabi crop which is planted in December and January and harvested from March to June. Farmers store them on their premises in ventilated structures with asbestos or thatched roofing for release till October after which the Kharif crop, planted in July-August enters the market. There is also the late Kharif crop, planted in September-October and harvested between December and February.  Kharif and late Kharif onions have a short shelf-life. They last for about a month after harvest.  About a quarter of the annual supply comes from the Kharif crop and 80 percent of it is from Maharashtra and Karnataka. Disruption of supply in these two states has a ripple effect across the country.

This year’s late onset of monsoon delayed the Kharif planting season. The monthly October report of the agriculture ministry said seven percent less area was planted. Heavy and prolonged rain damaged the transplanted seedlings and also destroyed late Kharif nurseries. Official reports said production at 52 lakh tonnes during the two seasons was 26 percent less than that of last year. Stored Rabi onions were also damaged because of high humidity. Of the buffer stock of 77,000 tonnes created with the price stabilization fund, about 39,000 tonnes had to be discarded because of spoilage. Famers and traders also suffered from such losses. 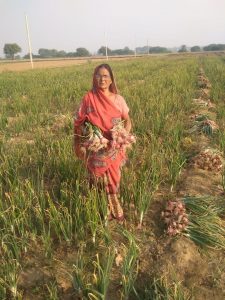 A Mirzapur farmer with her harvest.

Spreading the production of onions across the country and close to the places of consumption can help avert such situations. Major Singh, the Director of the Directorate of Onion and Garlic Research at Rajgurunagar near Pune reports encouraging results from trials in eastern UP’s Mirzapur district. He says the sandy loam of the Indo-Gangetic Plain is just right for onions as it drains well. Flooding is an issue for which he recommends raised-bed planting.  In all 140 farmers participated in as many field demonstrations which the directorate held since the monsoon season last year. Five farmers did very well. They swapped local varieties for improved ones like Bhima Dark Red and Bhima Super and adopted better agronomic practices. They reported yields of 4,857 kg and 9,360 kg an acre and earned a profit of Rs 2-2.5 lakh an acre, according to the Directorate, helped by the spike in onion prices.  A drive to encourage production in this belt could check onion price fluctuations.

Better storages will also help. Currently, onions are stored at ambient temperature in raised floor structures with side slats (for ventilation) and asbestos roofs. These are low-cost storages which the Maharashtra government subsidizes. Yogesh Thorat, Managing Director of Maharashtra Farmers Producer Company (FPC), a state-level consortium of FPCs, says it wants to create large storages totaling 25,000 tonnes in 10 locations but cannot home in on the right technology. In open ventilated storages, losses can be as high as 30-40 percent or even more depending on the outside temperature and relative humidity. Onion last longer in cold storages but sprout when kept in the open unless irradiated. Singh says losses were found to be lower – 10 percent – in bulbs stored for four months at 27 degrees Celsius. The monthly running cost was 30-50 paise per kg, about five times less than that of cold storages. The 20-tonne prototype which the directorate has developed needs to be scaled up to a few hundred tonnes and validated for commercial use, for which Singh wants financing partners.

India has the largest area under onions (13 lakh hectares), but yield at 17 tonnes per hectare is less than China’s 22 tonnes per hectare.  Productivity in countries like the Netherlands (51.8 tonnes/ha), Germany (46 tonnes/ha) and Iran (38.5 tonnes/ha) is higher but they cultivate it on a few thousand hectares and so can give better attention. 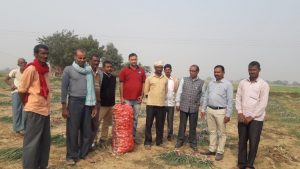 Mirzapur onion farmers with scientists from the Directorate of Onion and Garlic Research.

Anil Khar, an onion breeder at the Indian Agricultural Research Institute (IARI), New Delhi, says yields can be increased with hybrids. Hybrid onions are of uniform size, shape, colour, and maturity unlike open-pollinated varieties, which have a mix of A, B and C grades. Developing hybrids, he says, is a tedious process as onions are a highly cross-pollinated crop. India should sequence the onion genome, he says, to discover the genes responsible for particular traits. This can help in faster breeding through marker-assisted selection, an agri-biotechnology tool, for higher yields, longer shelf-life, processing quality (more solids, less water) and resistance to pests, diseases, and climate stresses.

Singh says the directorate has hybrids but has not been able to popularise them because they are not higher yielding than open-pollinated varieties.  He says the package of practices it has developed including planting on raised beds (ridges) and use of drip irrigation can improve yields. There are a set of farming practices to improve durability including lesser use of nitrogen, maintaining moisture during dry spells, and stopping irrigation a fortnight before harvesting. Shade curing for two weeks and disinfecting the storages to prevent fungal infections will also help keep Rabi onions longer.

There is a lot of demand for onions from Bangladesh, Sri Lanka, Malaysia, Indonesia, and the Gulf countries. India has not been able to make a dent in the European and American markets where bigger and less pungent onions are preferred. Singh says exporters do not take the trouble of obtaining certification for good agricultural practices. These countries are also strict about infections like black sooty mold.

Can processing help tide over episodes of scarcity?  Jalgaon-based Jain Irrigation has about 5,000 farmers on contract who produce processing quality onions with less water (88 percent). But dehydrating them to 5-6 percent moisture costs about Rs 25 a kg, says Senior Vice-President Kalyanrao Patil. A kg of dehydrated flakes is equal to 10 kg of fresh ones. The company supplies to the military and some pizza chains.

Dehydrated onion flakes retail for Rs 197 per 450 grams in online stores. Red onion powder sold in combination with garlic powder retails for Rs 299 per 150 grams.  Onion flakes, powder or paste are unlikely to be popular like tomato puree. The farmers of eastern UP and Bihar can satisfy India’s love of fresh onions without having to cry about prices, if they are assured of profits.

(All photos on this page courtesy of the Directorate of Onion and Garlic Research, Pune)