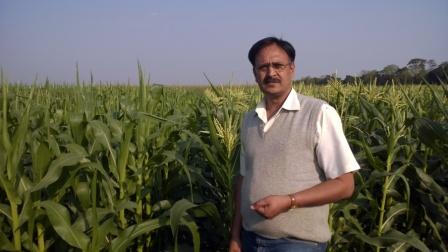 Half of Sudhanshu Kumar’s two hundred acre farm in Bihar is planted with hybrid maize. The post-graduate from Delhi’s Hansraj College tells Vivian Fernandes the only way that farmers can prosper is through an increase in productivity.

From his farm in Nayanagar, in Samastipur district’s Hasanpur block, Sudhanshu Kumar, 51, presides over his village, serving his third term as panchayat president. ‘I am known as an English-speaking mukhiya says Kumar without an accent. He is a post-graduate in history from Delhi’s Hansraj college and did his schooling from St Paul’s School, Darjeeling

The choice of history was dictated by the choice aspiration of every Bihari youth: civil services. When he did not crack it, he turned to agriculture, after spurning a job with Tata Tea in Munnar (Kerala).  Two hundred acres (81 ha) of land is a nice piece of real estate to fall back upon and in Bihar he has very few peers. The 2010-11 census says Samastipur has 6.85 lakh holdings but those of 20 hectares and above are just seventy-six.

Kumar is nationally-recognised for his work on leechi and has won a couple of national awards for mango-growing.  He has about 100 acres devoted to hybrid maize or corn, which he sources from Dupont Pioneer and Monsanto. The five-month crop give him 100 quintals a hectare. ‘In my village, I do not think anyone is doing desi makka (maize),’ he says.  Though tastier, the productivity of desi maize is quite low. It is half that of hybrid maize. It is a hardy crop with better tolerance of whimsical weather. It also requires lesser investment than sugarcane and had a shorter growing season.   Village folk prefer to supply to the starch industry as it is easier to meet quality standards. Maize meant for poultry is too demanding without commensurate returns. Though hybrid seeds have to be bought every year, ‘no farmer is crying about seed cost.’ Kumar says he buys maize seed worth Rs 1.25 lakh a year.

He would grow GM corn if the seed were available. Ditto for mustard.  Is he convinced about safety?  Frankly, I am a voracious reader. Nowhere do I have convincing logic between cause and effect,’ he says.

Kumar believes the only way farmers can prosper through productivity increase. Government subsidies and support prices can only go so far. Ultimately, it is yields that will decide whether farmers remain in the job or leave the farm. Seed technology is important and he hopes the government brings in a regulator that can weigh the costs and benefits. ‘We should not regret later that we missed an opportunity.’

Crop insurance which compensates farmers for loss of income, the promotion of mechanization to counter rural labour shortage, the liberal provision of soil testing facilities and generous agricultural credit are some of his expectations from the government.

(Interviewed during his visit to Delhi in December 2014)