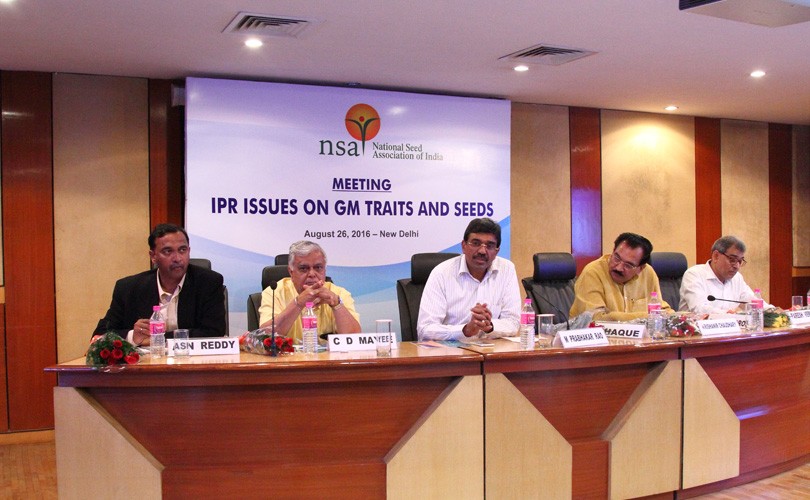 Kalyan Goswami, Executive Director of the National Seed Association of India explains the crux of its demands on use of proprietary GM traits.

Audience at the NSAI event.

We strongly feel that in the proposed guidelines (for use of proprietary) transgenic or GM traits, there is no need of prescribing compulsory licensing or a format for licensing.  The guidelines will have to prescribe only a procedure and method of arriving at the trait value as provided under Section 26 of the Protection of Plant Varieties and Farmers’ Rights (PPVFR) Act, in seeds that carry the (transgenic) trait.  The trait value has to reflect agronomic utility and should not exceed 10 percent (of the retail price).  However, in future there are likely to be many traits going into (save and sow) varieties.  Therefore the value of the trait will have to be somewhere in the range of 2-3 percent to make seeds affordable to farmers.

These guidelines will also help make (save and sow) varieties with GM traits available to farmers. Earlier they were restricted  only to hybrids which are expensive and have to be purchased every season.  Certain companies (read Monsanto) cleverly exploited Indian farmers by using bio-safety regulatory authorities like GEAC and RCGM to stipulate a requirement of no-objection certificates from them for approval of each and every new transgenic cotton hybrid developed by any applicant, thereby forcing all to sign one-sided license agreements which do not have sanctity under Indian law. All this was done to charge exorbitant trait value of Rs 1,250 per packet initially (till 2006) which later on with (state) government interventions came down to Rs. 180 per packet. The (central) government was compelled to act by promulgating CSPCO (cottonseed price control order), 2015 and notification of guidelines to prevent such situations.

By providing proper interpretation of the law as explained above in the guidelines, such private agreements in the future will not be required at all.  Unrestricted access to transgenic traits is provided in the PPVFR Act. In view of the importance of seeds and plant varieties to the country’s agriculture growth and to reward research in GM trait development, there is need for the guidelines.