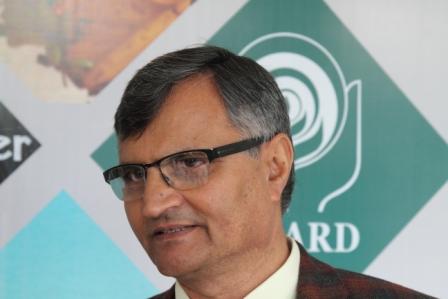 The recent decision of the government to hike import duties on edible oils might be the first step to revive oilseeds production in the country. Alongside, the Rajiv Gandhi’s Technology Mission on Oilseeds (TMO) must be relaunched, says NITI Aayog member and agricultural economist Ramesh Chand in the Business Standard.

On 1 March, the government raised the import duty on crude palm oil from 30 percent to 44 percent and on refined palm oil from 40 percent to 54 percent ─  their highest levels in a decade, according to Reuters. Palm oil accounts for over 60 percent of India’s edible oil imports It is consumed mainly by the poor, and by commercial users like hotels, restaurants, bakeries and food processors.

Chand says India should change its policy of allowing edible oil imports at low duties which has resulted in India becoming the second largest importer of cooking oil. From less than 5 percent share in the 1990s, imports account for 66 percent of the country’s cooking oil consumption, he says. Consumption has also tripled from 6 kg per person in 1992-93 to 18 kg per person now.

Low duties affect farmers of oilseeds which are grown mainly in rainfed areas in over 26 million hectares. Despite the distress caused by low prices, area under the crops has not declined because farmers have few alternatives.

India’s productivity of oilseeds is low. In soybean it is 1.1 tonnes per hectare against the world average of 2.5 tonnes and 2.9 tonnes realized by Brazil. In groundnut, India’s yield of 1.24 tonnes per ha compares poorly with US’s 4.5 tonnes. And in mustard, India’s average yield is 1.25 tonnes per ha, the world average is 2 tonnes per ha while Germany gets 3.9 tonnes per hectare. These figures are not comparable because of variations in crop duration. In soybean the productivity increase in mainly because of insect- and weed-resistance through genetic engineering. In mustard or rapeseed too productivity gains have been realized by Canada and Australia through genetic-modification technology. Germany’s does not allow GM technology; its rapeseed crop is of 300 days compared to India’s 130-160 days. India has not approved GM soybean and is dragging its feet on allowing commercial release of GM mustard.

NITI Aayog had in the early years of this government advocated GM technology. But Chand is silent as it is not favoured by ruling party ideologues.

Improved yields will not raise farmers’ incomes if they do not get remunerative prices. High import duties can help but are 30 percent and 40 percent rates (before the March hike) really low for food staples? The government should ensure that farmers get the benefit of support prices or a larger share of retail prices that consumers pay. Import duties must be dynamic, changing with world prices – low when prices are high and higher when global prices slump.