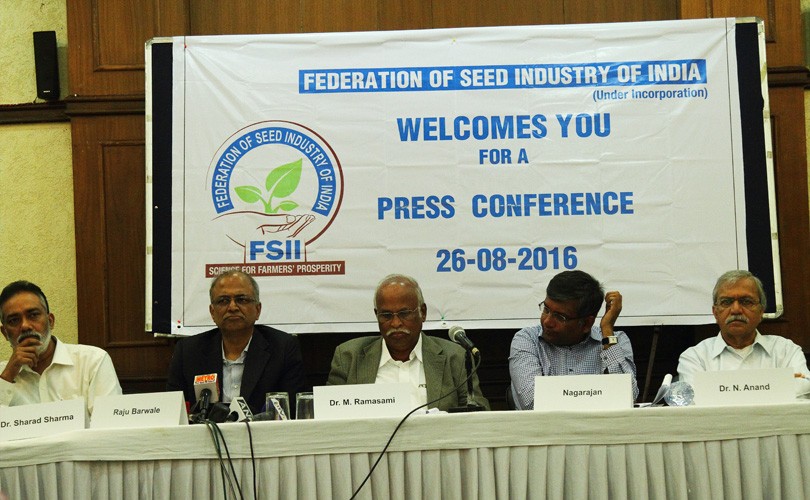 Agri-biotech research companies upped the ante with at least 10 of the prominent ones breaking away from the National Seed Association of India (NSAI) and announcing the formation of a separate lobby group, even before its incorporation, to represent their interests.

The development marks an escalation of conflict between two principal players. On the one side is Monsanto, which stands to lose the most if a May 18 notification of the agriculture ministry capping trait fees and waiving agricultural patents, converted into a draft for consultation, is re-instated in substance. On the other side is Nuziveedu Seeds Limited, whose founder and CMD, Prabhakar Rao, is the president of NSAI and is believed to be the force behind the May 18 notification. His three companies are the largest sellers of Bt cottonseed ─ 80 lakh of 4.1 cr packets sold this planting season, sources say ─ but their license to the insecticidal Bt trait has been terminated by licensor Mahyco Monsanto Biotech (MMBL) after they refused to pass on trait fees collected from farmers. Kalyan Goswami, NSAI Executive Director, called the breakaway group ‘Monsanto loyalists.’

The 10 members of the newly-formed Federation of Seed Industry of India (FSII) include Bayer CropScience, Dow Agro, DuPont Pioneer, Namdhari Seeds, Shriram Bioseeds, Syngenta, Mahyco, Monsanto and Rasi Seeds. While the first seven have their feet in both camps, the latter three have quit NSAI.  Between them FSII members account for 30 percent of the Rs 15,000 cr annual turnover of the Indian seed industry, and 240 years of research experience collectively, Raju Barwale, Managing Director of Mahyco said.

The main distinction between the two associations is that the new one does not want the government to regulate seed prices. It believes the government should create conditions for competition to play itself out. Though Monsanto has an overwhelming share of the market for the insecticidal Bt trait in cottonseed, the dominance was conferred by farmers who felt that similar traits sold by rivals were not as efficacious, the speakers said.

FSII supports patent rights for agricultural innovations and wants conditions for their use, including fees, to be determined by the innovator.  As M Ramasami, MD of Rasi Seeds said: ‘Our new association is driven by the fundamental value of respecting research and intellectual properties… no single company has all the solutions and hence collaborations, joint ventures, licensing arrangements… are necessary… based on fair dealings, mutual trust, respect for law and honouring contractual obligations.’

But the federation will have to do a much better job of projecting its interests. At the launch press conference in Delhi it fielded senior leaders, who are respected in the seed industry, but were poor in articulation. They vacillated when asked whether they would encourage other companies to emulate Monsanto (its affiliate Mahyco actually), and if so, how that could be seen as pro-farmer. Mahyco had in July told the Genetic Engineering Appraisal Committee (GEAC), the body which recommends release of transgenic traits for use by farmers, that it was withdrawing its application seeking approval for commercial cultivation of Bt cottonseed with insect- resistant and herbicide-tolerant traits. Reporters wanted to know how the move to deny technology was pro-farmer.  Mahyco feared that if approved, companies like Nuziveedu would use the seed without its permission by paying very low rates fixed by the government, if the government resurrected the May 18 notification in another form.  Instead of conveying their fears, the federation leaders said their ‘charter was under preparation,’ that they could not answer for individual members, that they will persuade others not to, and so on.

There was much hedging again when the speakers were asked whether their demand for greater transparency meant this government was less transparent than the previous one, so much so that the science editor of a TV news channel rudely told the speakers ‘not to waste our time.’ The tone was inappropriate but the sentiment conveyed the exasperation which some journalists may have felt. The speakers could have explained that farmers by and large were not aggrieved with Bt cottonseed prices or their availability and hence the December price control order and the May 18 notification on trait fees and patent rights were not warranted.

Sharad Khurana, country manager of Dupont Pioneer India offered an energetic defence of the move. ‘When I invest what if somebody copies and sells it at one-fourth the price?’  A trait developer would not license their technology on such unprofitable terms, he said.

The fear is not unfounded. Earlier in the day at NSAI’s seminar on ‘IPR issues in GM traits and seeds,’ Prabhakar Rao had said ‘public interest is significant in agriculture,’ because it impinges on food security. He implied that the rights of the innovator could not override those of the community at large. ‘Seeds and plant varieties are not inventions,’ and the Indian patent law could not apply to transgenics, which were properly the domain of the Protection of Plant Varieties and Farmers’ Right Act (PPVFRA), he said.

Asked how industry and the government could collaborate, Shilpa Divekar Narula, India Region CEO of Monsanto said the government would spell out research priorities for seed companies and trait developers to align their research projects.  Raising the productivity of pulses and oilseeds, which India is deficient in, would be one such area of alignment.

Soon after the FSII event, NSAI held a press conference at the same venue. The seeds of division will hurt the country if the government does not stop playing politics over pricing and patenting.