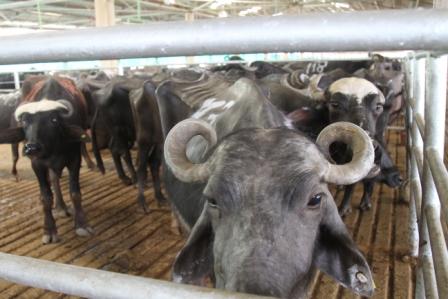 One year after they were notified the environment ministry bends to public pressure and amends its impractical rules for trading of cattle in animal markets, reports Vivian Fernandes.

The new draft rules for trading in animal markets notified by the environment ministry in supersession of those it notified last May do not define “cattle” so the previous definition that excluded “buffaloes” stands reinstated.

The draft rules have been toned down to reflect realities. Animal rights activists might say they have been “diluted.”

The new rules have a list of prohibited practices:  branding  for identification; shearing of horns, bishoping or changing the shape of teeth to make horses look younger  and cutting of buffalo ears; throwing animals on hard ground without bedding  while fitting shoes on their hooves; using hazardous chemicals; sealing teats with material like tape to prevent suckling; injecting steroids, diuretics or antibiotics other than for treatment and as prescribed by a veterinarian; hurtful muzzling to prevent suckling or eating; injecting oxytocin to induce milk production; castration  by quacks or traditional healers; nose cutting or ear slitting for identification other than by a veterinarian; tying rope around the penis of animals; and other practices as determined by the prevention of cruelty to animals committee.

The rules provide for a committee to prevent cruelty. It comprises eight core members and three optional ones but the owner of a cattle market is not among them. It will certify the markets and determine their maximum holding capacity.

The markets will need to have water supply, lighting in functional areas after sunset, feed supply and storage and measures for hygiene, including provision for disposal of dung and bio-waste. The draft rules say it is the duty of the person in charge of the traded animal to provide “wholesome” water and food.

The rules notified last year were onerous. The would have halted trading in cattle for slaughter had they not been stayed by the Madras High Court and the stay extended to the country by the Supreme Court.

Those rules said cattle traded in an animal market could not be slaughtered. To ensure this, the seller had to furnish five copies to various authorities and retain their copy for six months. The definition of cattle was expanded to include buffaloes.

The provision of these facilities would have raised the cost of trading. Perhaps, they would have driven many of them out of business.

The weekly cattle market at Laxmi Nagar in Mathura, for instance, is an open ground, where farmers and traders arrive before sunrise and leave by noon. Most of the buffaloes traded there are for slaughter, its owner Sandeep Gupta said.

The rules sought to be superseded said animal markets could not be set up within 25 km of a state border and 50 km of an international border. The new draft rules have done away with this restriction. They say that rules framed in 1978 to prevent cruelty to animals and those in 2001 for movement by foot must be observed while taking animals across the country’s borders.

The May 2017 rules had drawn a strong reaction for states. Kerala had said that “95 percent” of its population was non-vegetarian and bovine meat was a cheap source of nutrition.  The prescribed procedures were “elaborate,” it said, and could not be met by peasants who “eke” out a living from dairying. It cautioned against the adverse impact on animal husbandry and the state’s economy. The ban to trading in “animals” would cover goats, sheep, pigs and chicken, which was beyond the scope of the Act for which the rules were framed.

The Karnataka government said cruel practices had not been defined, a inadequacy that has been addressed by the new draft rules.  No penalties for violation had been prescribed, so they could not be implemented practically.  The 1960 Prevention of Cruelty to Animals Act did not ban slaughter, so how could the rules? The total ban on slaughter would put public health at risk. (The notified rules did not actually ban slaughter of animals, only of those traded in the markets. Abattoirs could procure animals directly for meat).

Mizoram said the rules should be diluted as India is a country of people of diverse cultures, traditions and religions “living peacefully.”  The rules will affect the sentiments of different groups of people and create “indifference” among them.

The 2017 rules have been framed at the instance of the Supreme Court following a public interest suit to prevent the large-scale transport of animals to Nepal for sacrifice. Another group had joined the litigation to prevent transport of cattle across the Bangladesh border for slaughter.

Science and Technology Minister Harsh Vardhan had notified the rules on the very day he had taken additional charge of the environment ministry. The Muslim community, which is mainly engaged in the trading and slaughter of cattle, had viewed them with suspicion.

(Top photo: Buffaloes awaiting slaughter at the abattoir of Allanasons in Aligarh. Photo by Vivian Fernandes).