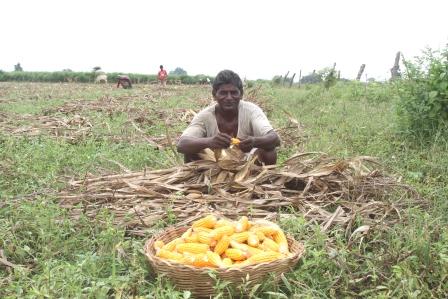 Seven states have reformed their agricultural markets with ordinances; the centre is also taking the ordinance route to amend the Essential Commodities Act, permit inter-state and intra-state trading in agricultural produce, and allow direct purchases from farmers. But smallholder farmers may not gain unless they are provided access to cheaper finance and delay sales of their harvest well beyond harvest time, reports Vivian Fernandes.

Difficulty in getting cheap credit and the transaction cost of selling small lots may come in the way of smallholder farmers gaining significantly from agri-market reforms which at least six states have legislated between March and May, and the further push that the centre is contemplating via a central law on agri-trading. With an ordinance passed on 2 June, Tamil Nadu became yet another state to liberalize trading in agricultural produce.

Between 3 March and 20 May, Haryana, Madhya Pradesh, Gujarat, Karnataka and Odisha promulgated ordinances or passed legislation allowing alternatives to regulated market yards to be set up. These could be e-trading platforms or private market yards. Direct purchases from farmers have also been allowed. Many of them have shrunk the regulatory authority of the Agriculture Produce Market Committees (APMC) to the physical boundaries of the market yards. Earlier, they had sway over ‘notified areas’ and could levy mandi cess on sales that happened even outside the yard precincts. Uttar Pradesh has allowed free trading only in fruit and vegetables – 45 of them. Its liberalizing enthusiasm has not touched cereals, pulses and oilseeds. Gujarat has included ‘farmer producer organizations’ within the definition of ‘agriculturist.’ It will also provide state-wide licenses. Karnataka has dropped the penalty on trading in agricultural produce outside the regulated mandis.

Under the constitution, states have the power to regulate agricultural marketing. The Centre has been prodding them to amend their laws for easier trading in agricultural produce. The first model act was crafted in 2003.  All the states acted on it, but with the sole exception of Arunachal Pradesh, have carved out exceptions. In 2017 another model act was drafted to act as a template for the states. With the centre’s persuasion, BJP ruled states have taken the lead, but the centre is not waiting for the non-BJP ruled states to follow the wind flow.

As part of her much-criticized stimulus packages to spur the economy which has been knocked down by the lockdown, the centre has proposed a legislation of its own. The agri-trade facilitation bill or agricultural and horticultural commerce bill as the draft has been called draws upon the centre’s power under the Concurrent List to regulate trade and commerce in foodstuffs, cooking oils and oilseeds, raw and ginned cotton, cattle feed and raw jute.

Companies like ITC have been asking for such a law that will allow them to buy and sell agricultural produce across the country. ITC gets most of its profits from cigarettes. But the longevity of this business is in doubt because of hostility from healthcare regulators. Cigarettes are heavily taxed. They carry health warnings with hideous pictures of cancerous tumours. Some countries allow them to be packaged only in brown paper. There will be more regulatory hurdles in future. A puff of nicotine might need a medical prescription. ITC has deployed the profits generated from sale of tobacco in other – sustainable – businesses. It has built a large franchise in branded staples like atta, rice, pulses, prices, shrimp and coffee and ready-to-eat foods.

Procuring directly from farmers is not easy. It costs money in physical infrastructure and staff salaries. Even farmer producer companies find it difficult to aggregate small lots from their many members. The law requires farmers to be paid immediately for procured produce. But to pay the farmers upfront, FPCs need finance, which banks hesitate to lend, because they don’t have assets to offer as security.

When the Ratlam Adivasi Kisan Producer Company procured 2.171 quintals of wheat seed in April-May 2019, it took recourse to a price guarantee arranged by Rabobank Foundation. This allowed it to take a loan of Rs 50 lakh from Yes Bank. The company paid Rs 2,000 a quintal, a little more than the price at the regulated mandis.

In the normal course, it would have found it difficult to get the loan of Rs 50 lakh to pay for the seed. Yes Bank gave the loan without security because Rabobank had assured payment in case of default. After the procured seed was stored in a warehouse, the unsecured loan was closed and another loan was given against the warehouse receipt equal to 70 percent of the value.

The seed was for sale in September-October, 2019. Prices fluctuate and in case they fell, the company would have had to pay cash or offer additional security. Otherwise, the bank would have pressed the sale of seed stored in the warehouse. The price at the time of sale was supposed to be Rs 2,700-2,900. But Rabobank had stood guarantee for a price drop of up to 10 percent. Because of the guarantee, the company got cheaper credit as well. It paid an interest of 10 percent, against 13.75 percent it was paying earlier, Rashid Sheikh of the Association for Social Advancement, an NGO which hand-holds farmer producer organizations (FPO), said.

The price risk guarantee is not new, but it has been used for the first time by an FPO with smallholder farmers as members, said Arindam Datta, Executive Director, Rural and Development Banking at Rabobank.

Access to finance was cited as a big difficulty by many of the 92 FPOs that Arya Collateral Warehousing Services had interviewed during the lockdown, says Prasanna Rao, its CEO and Managing Director. The company provides finance against warehouse receipts.

This is one of the reasons why smallholder farmers sell to local traders or commission agents. Since they borrow from them, they are compelled to sell to them and settle the loan soon after harvest, when prices are low.  Even if free to sell, a farmer with about 20 quintals of grain may not find it profitable to hire a truck, stay possibly overnight at a regulated mandi while awaiting his turn in the queue to auction his produce, and incur additional costs on out-of-home stay and meals. He would opt to sell to the village trader, who aggregates the produce from many such farmers.

FPOs can act as aggregators provided they have recourse to finance and innovative financial products like the price risk guarantee.

Even so, a choice of trading platforms will help farmers. Millers and food processors could not buy produce without a mandi licence, which was not easy to obtain, says Mukeshbhai Pragjibhai Jhakkar, a cattle-feed deal and member of the Gujarat State Agriculture Marketing Board till March. His says his district, Banaskantha, has four private market yards. With the ordinance passed earlier this year, state-wide licenses will be issued. For trading in fruits and vegetables, no license is needed he said.

Liberalized trading will allow smartphone apps to connect farmers with produce to sell to aggregators, very much like taxi-hailing services collectivizing taxi owners. The aggregators could sell through online platforms like Amazon or Flipkart. This will make farmers responsive to demand, says S. Sivakumar who looks after agri-business in ITC.

Legislation is a necessary but not sufficient condition. There is a change in “structural power” says Mekhala Krishnamurthy, of the Centre for Policy Research who has done studies on regulated market yards. Smallholder farmers will gain bargaining power if they successfully band together in FPCs or legally lease out their small, unviable, holdings without fear of losing title.

We need an ecosystem approach to change the lot of smallholder farmers. It cannot happen piecemeal, one law at a time.