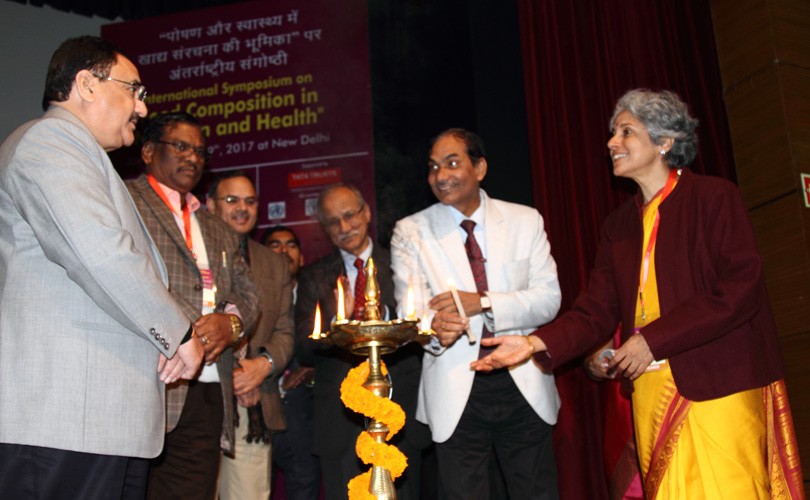 Vivian Fernandes reports that the tables have been comprehensively revised. They provide nutrient analysis of 526 foods including micronutrients like Vitamin D2 and amino acids.

The National Institute of Nutrition (NIN) has released tables of the nutrition composition of Indian foods in the first major revision after 45 years. The “Indian Food Composition Tables,” have analysed 526 foods for more than 150 nutritive components. The food samples were obtained from six representative regions. Sophisticated bio-analysis tools have searched them for such nutrients at Vitamin D2 and anti-nutrients like heavy metals.

“After 1971, this is the first expansive food composition data to be released having foods analyzed from across the country. India now joins the elite league of nations having its own complete food composition data base,”  said J P Nadda, Minister for Health and Family Welfare, while releasing the work on 18 January, 2017. He suggested that an app based on the tables be developed so that a person can know how many calories, proteins and vitamins are being provided to them when they consume a slice of pizza, a plate of gol-gappas, or a serving of biryani.

The tables would serve multiple constituencies, Soumya Swaminathan, Secretary, Department of Health Research and Director-General, Indian Council of Medical Research (ICMR) said. Apart from being a guide to consumers, it would help nutrition researchers, those engaged in epidemiological studies, crafters of school mid-day meals and agricultural scientists.

“We are developing an app which will be downloadable on any smartphone. It should be ready in two months,” Swaminathan said. “You can order a pizza or a paneer roll and the app should tell you how many calories and nutrients you will consume.” The database will be the back-end of the app, she said, while dedicating the tables to C Gopalan, the “father of nutrition in India.”

Trilochan Mohapatra, Secretary, Department of Agriculture Research and Extension (DARE) and Director-General of the Indian Council of Agricultural Research (ICAR)  said the next step would be to map the various food crops that are grown and consumed in the country.  He said more than 5,000 varieties of field crops have been released. Rice alone has 1,200 varieties. In all, about 1,100 varieties and hybrids are cultivated.

The nutrition composition of these varieties varies with soil type and added soil nutrients, “We are aware that some of the widely consumed foods are deficient,” Mohapatra said. Rice, for instance, has 7 percent protein, which is of better biological value that wheat and maize protein but is deficient in zinc and iron. “Bio-fortification is the answer,” he said. “We have culinary diversity but our food is not as diverse.”

ICAR’s focus is on “nutrient rich and nutrient dense” food. It has released rice last year which has 10.4 percent protein. Another variety has 24 parts per million (ppm) zinc. “We have developed cauliflower with 10 ppm beta carotene.”

Mohapatra referred to Kerala’s Navara rice which has medicinal properties. “These are poor yielders.” Raising their yield without eroding their unique properties would be a worthwhile challenge for researchers to take up, he said.

T Longvah, Director-in-charge of NIN said the tables not only look at the protein composition of foods but also their amino acid break-down. He said the tables would be a useful contribution to making India healthy, as the country has people who have an excess of nutrition and suffer from diabetes (6 percent of the population) and hypertension(23 percent). On the other hand, 39 percent of children are stunted due to under-nutrition.

Ruth Charrondiere, Coordinator of the Food and Agriculture Organization’s International System for Food Data Systems (Infoods) called the tables “a jewel.” But the release of the tables should not be an end in itself; the real test would be in making them a tool to improve people’s health. Simple practices like soaking pulses and cooking them in new water would reduce anti-nutrients and make their iron content bio-available, she said. India should aspire to ensure that the nutrients it produced were enough to meets the nutrient needs of its people, she added.  She called for adoption of a food systems approach.

Hamid Nuru, Country Director of the World Food Programme said the tables would be useful for other countries as well. His country Botswana, is agro-climatically similar to Rajasthan. Foods developed for the state based on the tables should be useful for the people of Botswana as well.

(Click here to read another version of this report was published in the Financial Express).