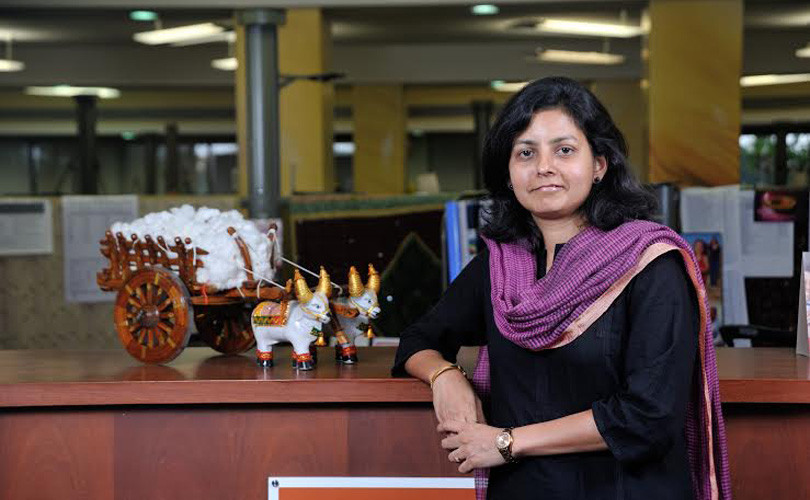 Monsanto India is a large agri-biotechnology company, well–accepted by the farming community but operating in a policy environment which is less than welcoming. At its 40th anniversary, she speaks to Vivian Fernandes about how the company is shaping the future of agriculture.

On 2 September, 2015, commodities trader and hedge fund manager Jim Rogers decided to throw in the towel because, ‘one can’t invest just on hope’ in India. It is easy for financial investors to sell assets and move on; hard for an entrenched company like Monsanto India. It cannot write off a large market with a big agricultural footprint though a combine-harvester could be driven through the gap that separates its experience from hope.

‘We remain cautiously optimistic,’ says CEO Shilpa Divekar Nirula, whose slender build does not quite mesh with the US multinational’s image as an agri-biotechnology hulk, allegedly playing God with nature. ‘Resigned’ might more appropriately describe the mood.

‘Over the years the two things we feel extremely good about is working at the grassroots level across the length and breadth of the country with farmers and bringing in innovations from time to time which have resulted in our relations with them deepening over a period of time,’ says Nirula.

‘Policy direction for agriculture and a more predictable environment, especially from an investment standpoint, where you know what the processes are for approval, how much time it is going to take, what the mechanisms are when we bring out a product, how can we be surer about our ability to have sustained earnings… That will be encouraging.’

Even for a deep-dive company celebrating 40 monsoons in India, the events of the past few months cannot be pleasing. Ahead of the sowing season, the Maharashtra government slashed the price of a 450 gram packet of genetically-modified Bollgard II brand Bt cottonseed by Rs 100 to Rs 830, citing a slump in cotton prices. The Bt technology business is routed through a privately-held joint venture with Maharashtra Hybrid Seed Company called Mahyco-Monsanto Biotech, in which the US multinational has a minority, 26 percent, stake. The previous price revision was in 2011.   This year’s rate reduction was upheld by the Bombay High Court.

Eknath Khadse, Mahatrashtra’s agriculture minister, has in an interview to a Marathi daily, threatened to bring the rate down to Rs 500 next year. It is not an attitude that investors will find comforting.

Through price orders are broken down into components like payment to seed growers, royalty and overheads, their basis can be quite nebulous. Nor is the frequency of price revision known. ‘This makes it unpredictable for an R&D intensive industry and that includes seed companies and technology providers like us,’ says Nirula.

Monsanto, however, brought price controls upon itself in 2005 by charging a high trait or technology fee of Rs 1,250 a packet. That put the seeds beyond the reach of farmers, who sought government intervention when their crops lacking the protection of Bt genes were ruined by boll worms.

The Telangana government in May kept retail prices unchanged but reduced the technology fee to Rs 50 for Bollgard II. It said the order would supersede private contracts. MMB charges Rs 163.29 as technology fee.  Through it obtained judicial relief, ten of its 46 licensees are not paying.  The Andhra government had tried the same thing in 2010, but the state’s high court had struck down the order.

In Nirula’s view, farmers are not complaining because ‘the price-benefit equation is clear in their minds’. The price of cottonseed, according to her, is ‘probably four percent of the total cost of cultivation’. But it has the biggest impact on output, rain and everything else notwithstanding. The trait fee, she notes, is one-and-a-half percent of the incremental benefit that the technology offers to the farmer as compared to not having the technology. ‘It is the lowest in the world ─ lowest by a magnitude,’ she asserts.

‘These license contracts were entered between Mahyco-Monsanto and the seed companies in mutual good faith, after extensive discussions and negotiations,’ says Nirula. ‘It is unfortunate that all of a sudden we get a letter that a few licensees would not make any payments.’

She lists the services which MMB provides its licensees: testing Bt seeds for their potency in the field, checking for seeds that should not exist, certifying the product, and estimating demand ahead of the season. There is a lot of on-ground effort as well. ‘It is technology stewardship which Mahyco-Monsanto, as original developers of the technology, have taken on themselves,’ Nirula says.

The regulatory process for GM crops is also quite opaque. No genetically-modified crop other than Bt cotton has been approved since 2002. When this government took over there was an unexpressed expectation that the pipeline of approvals would start flowing. Environment Minister Prakash Javadekar and Prime Minister Narendra Modi support GM crops and the government has filed its objections in the Supreme Court against a plaint to ban testing. But few states allow field trials. With Maharashtra being the latest to suspend them, all BJP states are off limit for GM crop testing. Without the trials, bio-safety data cannot be generated and crops cannot be brought to farmers’ fields. It can be very frustrating for companies like Monsanto maintaining research establishments and funnelling dollars into them year after year with little emerging from the outlet vent.

‘I read in this morning’s paper (4 Sept) that a meeting of the GEAC (Genetic Engineering Appraisal Committee, the body at the apex of the GM crop approval system) was apparently held. I was encouraged when I read that to say, ’Okay a meeting has happened’.

If that is relief it underlines the extent of dejection.

Political ambivalence on GM crops has immobilized the state research sector in his area. The Indian Council of Agricultural Research did not know or did not act on the knowledge that Monsanto’s Bt gene MON 531 had gone off-patent in the United States in 2012.  It was this gene that was spliced into cottonseed which India approved for commercial cultivation in 2002.

In a letter to S Ayyappan, the Director-general of ICAR, Agriculture Secretary Siraj Hussain says the Sindh Seed Council has released two Bt cottonseed varieties based on the gene, and has evolved a number of Bt hybrids as well, but ‘India could not do so.’

This event was brought to the notice of the Prime Minister’s office by Vijay Jawandhia, a founder member of the Maharashtra-based Shetkari Sanghatana, who fell out over its pro-market policies in the early 1990s. Jawandhia is not against agri-biotechnology. The Wardha-based farmer leader wants public sector research institutions to take the lead so that farmers can be freed, as he puts it, from the chakravyuh (or trap) of private seed companies. Jawandhia says he came to know about the patent expiry from a report in Pakistan’s Dawn newspaper

In a disapproving tone, Hussain says, ‘in India, there was never any patent on this event. However it seems we were unable to take prompt action in making Bt cotton seeds with this particular event (or other events) available to our farmers as public release varieties. It is understood that the gene now can be used by ICAR in straight-line varieties of cotton for production of seeds at lower costs for our farmers’ after obtaining requisite clearance from the GEAC.’

While ICAR is trying to catch up with the past, MMB has moved on. Nirula says in her ‘assessment less than five percent’ of Bt cottonseed used in India has the off-patent gene. The rest is Bollgard II, which ‘offers a broader spectrum of control’ as it has two insecticidal proteins. Nature does not keep still and pests are constantly evolving. Bollgard II was approved for commercial release in 2006 as bugs had developed resistance to its predecessor.

MMB is now testing Bollgard III, which has a three-Bt gene combination. But it is immediately focussed on Bt cottonseed with herbicide tolerance. ‘It is the next thing that is in the regulatory pipeline from us,’ Nirula says. The company sold Rs 199 cr worth of Roundup, its brand of the proprietary herbicide glyphosate in the financial year ended March 2015. This was 36 percent of Monsanto India’s sales for the year.  Glyphosate-tolerant cotton will drive up demand for the chemical because farmers can spray their fields without worrying that cotton crops will get destroyed along with weeds.

Monsanto India believes mechanization of picking and use of weedicides can bring down the cost of cotton cultivation, as labour costs are rising, albeit slower than in the last decade, and address the non-availability of hired farm hands when most needed. For mechanical picking, affordable machines have to be developed, for which it has partnered with New Holland Fiat. Research effort is also being trained on changing plant geometry to allow machine movement.

Corn or maize is the company’s main business in India. Last year, 62 percent of its sales were from corn hybrids.  India’s rabi maize productivity is high; kharif yields pull the averages down because of greater incidence of pest attacks and diseases.  Since maize is grown mainly in rain-fed areas, making them resilient to moisture stress is a desirable trait as is cold tolerance in rabi maize grown in eastern India.

Maize is a more efficient converter of solar energy than rice and requires less water. But as it is more feed than food, the government does not buy it for sale through ration shops. Without the comfort of assured procurement, farmers who should switch over to maize in the monsoon season do not. To persuade them, Monsanto India is partnering with food processers and logistics firms, so that whatever is grown is bought and transported with little wastage. Maize produces toxins when high in moisture so it needs to be dried well.

Partnerships might well drive the company’s future business as it strives to become a total solutions provider – supplying not only seed technology but also the wherewithal to get the best out of them.

Its mobile phone-based free advisory service in Mumbai has 3.3 million registered farmers, says Nirula, and the database that its call centre agents rely on is the ‘bible on corn which has got developed over years and years of experience.’ She believes it can become a business in itself working at two levels: providing base content to farmers at large, and specific advice to individual growers.

Monsanto India wants the government to spell out its policy on the role of the private and private sectors in agriculture and attitude to partnerships with state institutions for R&D and extension work.

Monsanto’s acquisitions of Solum for testing soil and nutrient variations granularly in fields; farm equipment company Precision Planting; and Climate Corporation, a weather data business that can say whether crops should be planted a few days earlier or a change in irrigation schedule is needed, show that agriculture is getting more technology- but less resource-intensive.

India can live in dread of agricultural technology majors fearing loss of control over agriculture to them. Some erosion of sovereignty might be inevitable like the loss of privacy on the Internet. But that is the price we will have to pay to meet the needs of a population growing larger and richer. Just as India lives with inconvenient neighbours it will have to manage companies that are too big for its comfort.