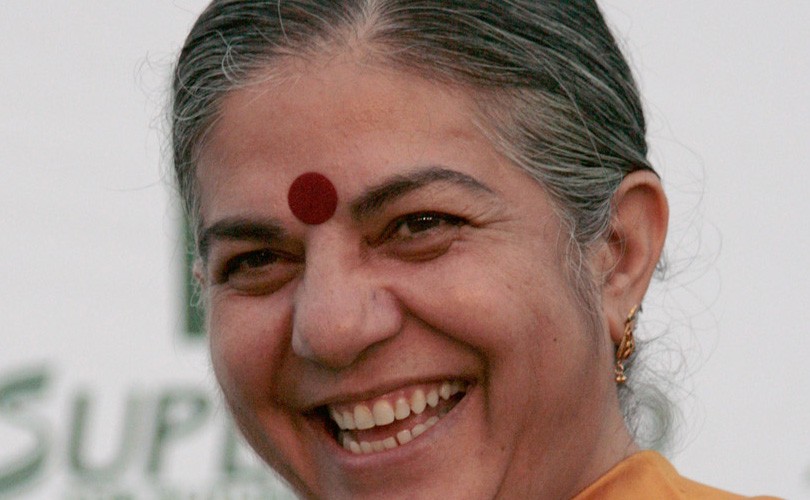 In an article in www.thequint.com, environmental activist sees sinister undertones in the proposed merger of Monsanto and Bayer.  She reminds readers of their history of developing products that were used by the US and German militaries respectively. The merger will give them access to each other’s weedicides – Glyphosate and Glufosinate – which in her view, is a wicked cocktail. The recently formed Federation of Seed Industry of India, according  to Shiva, is another assault on India’s farmers, its environment and laws. She says: “The new group is not ‘seed industry,’  because they produce no seeds. And they try to stretch patents on chemicals to claim ownership on seed, even in countries where patents on seeds and plants are not allowed by law. This is the case in India, Argentina, Brazil, Mexico and  many other countries.’

Shiva is sceptical about the public sector character of DMH-11, the GM mustard hybrid developed by the University of Delhi South Campus. She calls the lead scientist, Deepak Pental  a ‘GM-Operative’ acting on behalf of  ‘Mobay’ to promote glufosininate sales – to which the hybrid is tolerant – in the guise of bridging the country’s edible oil deficit.

Thequint invited Vivian Fernandes to offer a counter view. Here it is:

A wave of consolidation has hit agribusinesses following the global downturn in commodity prices. Companies are trying to ride the current lean patch by cutting costs and combining strengths. Dow Chemicals and DuPont have merged, ChinaChem has acquired Syngenta, Monsanto was said to be talking to BASF for a merger of their agrichemicals businesses; now Bayer is making a bid for it.

Some might find the accumulation of corporate power troubling. So long as the giants face competitive pressure, size should not be a matter of concern. Indeed, it allows them to deploy enormous funds for research. Bayer has announced it will spend 2.5 billion euros ($2.82 billion) to create infrastructure for innovation over the next three years. This excludes 1 billion euros ($1.13 billion) it will spend annually on R&D. Last year’s entire budget of the Department of Agricultural Research and Extension (DARE) was less than $850 million.

Companies are in business to maximize profits; it is the duty of governments to ensure their greed is tamed. In 2002, India approved the release of Bt cottonseed for cultivation by farmers. This seed contains genes derived from the Bt soil bacterium which allows cotton plants to produce their own insecticide against a scourge called bollworms. Seed companies initially charged Rs 1,600 a packet of 450 grams. Of this, Rs 1,250 was royalty for the insecticidal trait. This put the seed out of the reach of most farmers.  Heeding their protests, the Andhra government imposed price controls in 2006. It said the seed could not be sold for more than Rs 750 a packet. That increased demand for the seed manifold. The company that brought the technology to India has given the license to 49 franchisees. This planting season 41 million packets were reportedly sold.

Official attitude to genetically-modified (GM) crop technology has been ambivalent, if not hostile.  Doing bio-safety tests and obtaining approval for commercial cultivation of GM crops takes enormous time, effort and money. Those with approved technology enjoy a virtual monopoly in the absence of competing traits. Even the incumbents themselves are not able to introduce improved variants to keep ahead of bugs that develop resistance through the process of evolution.

‘Regulation, not capability, has become the entry barrier in India’s agri-biotechnology industry’, says K K Narayanan, the co-founder of Metahelix Life Sciences, a Tata group company, and its managing director till March this year.  Some companies have lost patience. DuPont Pioneer, Advanta and BASF have closed down their India facilities engaged in enhancing the productivity of rice through genetic engineering.

Even the public sector has not been able to scale the regulatory wall. Research Institutes of the Indian Council of Agricultural Research (ICAR) and of state agricultural universities have developed transgenic technologies to make chickpea (chana) and pigeonpea (tur) resistant to the pod borer. Vitamin-A enriched rice is waiting to be commercialized. Efforts are on to make sugarcane drought resistant. There is research happening in rice that can be grown in saline soils. In August, the National Academy of Agricultural Sciences released a policy brief to ’accelerate utilization of GE (genetic engineering)  technology for food and nutrition security and improving farmers’ income.’

Only those with tenacity like Deepak Pental, who led a team of Delhi University scientist to develop GM mustard, persist. The Genetic Engineering Appraisal Committee (GEAC) has put the bio-safety docket of their hybrid, DMH 11, in the public domain for comments. A sub-committee of GEAC finds the hybrid safe for humans, animals and the environment.

The government wants private technology but disapproves of market pricing.  It says private companies are profiting at the expense of farmers by, for example, incorporating the Bt technology in hybrids and not in varieties that can be saved and sowed the next season.  Hybrid seeds have to be bought year after year. Otherwise, they lose hybrid vigour.  Private companies say that is the only way they can profit from the technologies they have developed.

If the government is concerned about farmers’ interest it must encourage the public sectors to be quick with technologies so private companies face pricing pressure. Fourteen years after Bt cottonseed was approved, public research institutes have not released a single save-and-sow Bt cotton variety.

The public sector is constrained by funds and expertise. Perhaps it lacks the drive. ICAR has 103 institutes; its focus is diffused. ’Gone are the days when the public system could meet the seed needs of the country,’ Trilochan Mohapatra, Secretary DARE, and D-G, ICAR, told this correspondent in an interview last month. He was looking to partnering with multinationals for GM research. ‘They can put in money and we can do research together to solve a particular problem.’

If the government does not like farmers paying for seed technology year after year, it must buy the technology outright and give it to farmers for free or at subsidized rates, says Pravesh Sharma, former agriculture secretary of Madhya Pradesh. If India can spend $10 billion annually on imports of electronic items like smartphones, surely it can afford to pay for critical farm technologies, he says. The state-owned ChinaChem acquired Syngenta, a Swiss company, for its pipeline of innovative technologies including GE traits.

Fear of foreign produced science will increase Indian dependence on it over the long term, if it does not produce its own, Chief Economic Adviser Arvind Subramanian said at a public event in May.  How does it help to be nasty to agri-biotech MNCs for our inadequacies?