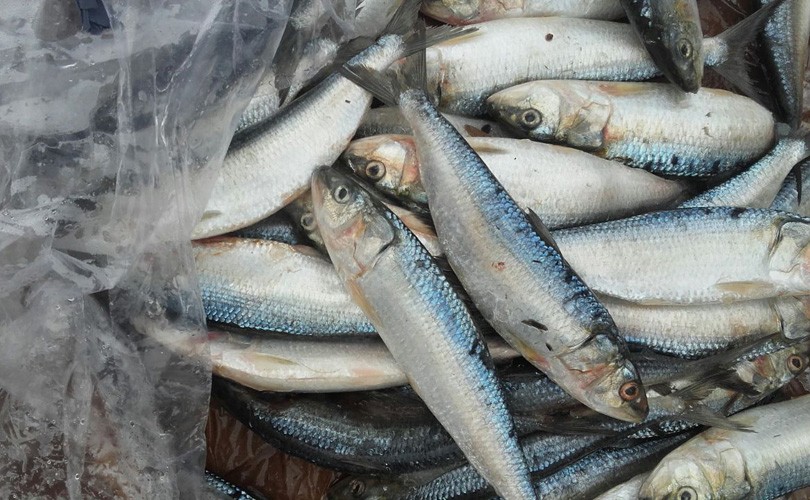 Importing sardines to Mangaluru is like hauling rice to Thanjavur. The sardines imported from Oman are big in size because regulated fishing allows them to grow unlike fishing off the Karnataka coast where destructive practices are depleting fish stocks and leading to a loss of bio-diversity, reports Vivian Fernandes. This story was first published as a column in the Financial Express.

Unknown perhaps to the Prime Minister, Modi sardines are the rage in Mangaluru, through the fish rich in heart-caring Omega-3 fatty acids are actually imported from Oman and have a tenuous connection with the resident of 7, Race Course Road in New Delhi, except that the consignments reportedly make their way through Gujarat.

Modi butai, as they are called in Tulu, the local dialect, may also be a play on size, real in this case and not the empty boast of India most famous citizen a.k.a Mr Chappanincheswar. About ten Modi butai make a kilogram, unlike 20-25 of local ones, the result of regulated fishing in the Arab sultanate at the mouth of the Persian Gulf, which allows fish to bulk up. About 300 containers have landed for the first time this season (August to May) said Loknath Bolar, an ex-railway employee from the Mogaveera fisher community who owns a boat and heads the Mangaluru mechanized fishermen’s primary cooperative society. ‘They are very tasty,’ he added.

Importing sardines to Mangaluru is like hauling rice to Thanjavur. Three decades ago, sardines used to sell by the handful. Weighing scales were not known to the retail trade then, and fish used to be sold by number. Landings of sardines were so huge, hawkers did not have the time or patience to count them.

Ramachandra Bhatta at the College of Fisheries. Photo by Vivian Fernandes

‘The fish supply this year is the lowest’ in his recollection, said K Ibrahim, who has been a merchant at the city’s fish auction centre at South Wharf, Bunder, for over four decades. Seer fish (surmai), which used to retail for between Rs 150 and Rs 300 a kg (depending on the day’s catch) at this time of the year, sells for Rs 700 a kg. Mackerels cost double at Rs 200-210 a kg. The same is true of sardines.

Researchers K Ponnusamy and two others wrote in a 2012 paper that their analysis of sardine landings on the Malabar Coast between 1926 and 2005, showed a decline only in the early 1940s and 1994.

Fast boats with 500 horsepower engines and trawling speeds of four knots (or 7.4 km) an hour are non-selective, sweeping in both marketable and non-marketable, and mature and immature fish. Though the mesh sizes of the trawls or nets at the opening are large, those at the cod-end or portion of the trawl where fish is retained are as small as 20 mm.  And when the trawl is dragged at high speed, the meshes get elongated and further constricted, allowing no vent for juveniles to escape. Bolar says there is no legal restriction on mesh sizes.  High intensity Chinese lights that mimic the dawn and trick fish into rising to the surface also increase the intensity of fishing.The non-marketable fish is used for fish oil and fish meal, which is fed to chicken and  captive fish. According to the researchers cited above, there are no official statistics of fish oil or fish meal production.

But capacity is quite large to meet the gap caused by fluctuating global supply. In 2014-15, India exported 2.26 million kg of powdered fishmeal but two years earlier they were ten times larger at nearly 22 million kg. For Bhatta fishmeal exports are a loss of biodiversity. India should be importing fishmeal, not exporting it, he asserts.

India’s fish production has increased 13.5 times since 1950-51. The contribution of marine fisheries, however, has shrunk from 71 percent to 34 percent. That is because of a huge increase in inland fisheries since the last decade. Yet marine fish landings are 6.5 times more than they were around the time of Independence.

Despite advances in technology, the catch per unit of fishing effort has declined, says Bhatta. There has been a spurt in numbers of fishing craft. Padma Sridhar used to own three boats, each of which costs Rs one crore now. For ten years business was good she said, but six years ago, she went bust and had to even sell her personal property. ‘I managed to give good education to my children, that’s the only saving grace,’ she said while selling fish with her husband at South Wharf.

It costs about Rs 3 lakh to despatch a boat to the sea with enough diesel to last seven to 10 days, ice to preserve the catch and rations for the crew. If it does not return with Rs 7 lakh worth of catch, it is difficult to service the loan, maintain the craft and break even Sridhar said. According to her a majority of fisher folk are in debt.

It is a hand-to-mouth existence for those engaged in fish retailing, says S Gunakar, an assistant professor of commerce at a city college, who has done a doctorate on the social capital of fish hawkers from his Mogaveera community. For fisherwomen the day begins before sunrise when they have to cook for the family and reach the auction centre by 6 a.m.  He says much of the profit is creamed off by middle men, which is the case in agriculture as well. Even after long hours if they manage to keep their heads above water, it is because the price of fish has risen multiple times over the past decade with demand outpacing supply.

Baby Puthran used to harvest and sell clams till a shipyard fenced off a part of the sea near her fishing village.  Now she sells fish worth about Rs 2,000 a day at the auction centre. There are times when she makes a loss, as on the day she spoke to this correspondent.

Savitri, who has been selling fish for about twenty years, says she earns Rs 200 a day. That’s better than sitting idle. She blames the influx of other communities into the trade.

One consequence of fish inflation is that the poor are denied a cheap source of nutrition.

The traditional fishing communities had an affinity to the sea. Since their livelihoods depended on it, they would fish sustainably. Fishing craft were small and would return the same day.  But now anyone with capital can enter the business. Unless fishing is regulated in India’s coastal waters and destructive fishing is prevented, Modi butai may just the first of several species to be imported.

Link to column in Financial Express

Read this interesting and in-depth www.scroll.in story on why fisherfolk in Tamil Nadu are catching fewer and less diverse fish.