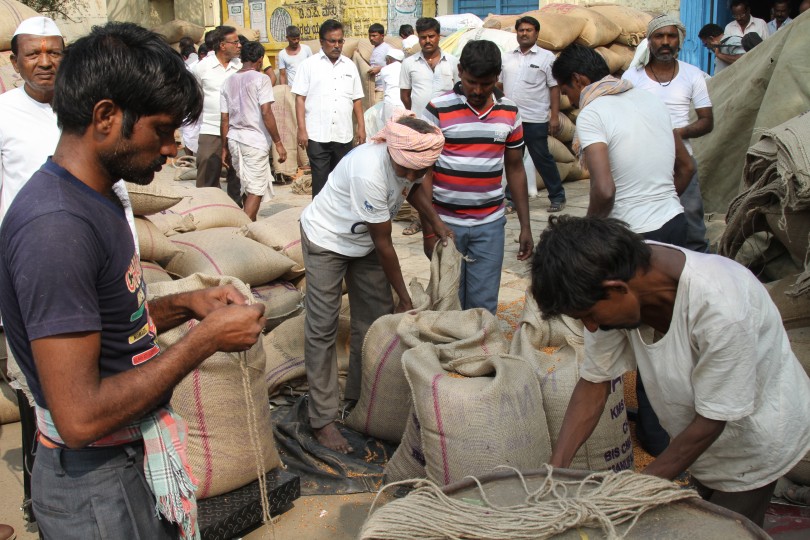 The Agriculture Minister has been rattled by unrest among farmers. He has cancelled his visit to China. On 15 June, he told pesticide makers to reduce prices. The next day, he prevailed upon the private seed industry which obliged him with a 10 percent discount on hybrid seeds, other than price-controlled Bt cottonseed. But competition is so acute that seeds are selling for less than the maximum retail price. Rather than manage the headlines, the minister must get down to the real job of improving farmers’ incomes and keeping them stable, reports Vivian Fernandes.

There is supposed to be an inverse relationship between risk and reward. But that does not seem to be true of Indian agriculture. Farmers are at risk when the weather is good and also when it sours. Bad weather means poor harvests and lower incomes. Price slumps result in a similar outcome when the weather is blessed.

In the three years that this correspondent has covered agriculture with some diligence, he has seen potato prices dive from Rs 8 a kg to Rs 2 in 2015, followed by shooting prices the next year and a bust early this year.  The wheat crop, about to be harvested, was laid low by freak hailstorms that year in western Uttar Pradesh resulting in widespread losses. The government diluted the quality norms for procurement, but the notification came after farmers had sold in distress, so traders benefitted. Later that year, Punjab’s cotton farmers were devastated by an infestation of white flies and ineffective pesticides supplied by the government.  In Bundelkhand, dry spells during four consecutive crop seasons forced small farmers into wage labour in cities. Around this time last year, Marathwada was in the throes of a drought and drinking water was supplied to Latur by train. In Haryana, potatoes are now selling for less than Rs 1 a kg. Sayantan Bera of Mint newspaper has produced a mandi receipt of a farmer who sold 4,300 kg for nine paise a kg, after deducting mandi overheads.

Copious rains during the monsoon season last year brought cheer to rural households. Precipitation across the country was just 3 percent less than the long-term average. Abundant harvests followed both during the summer and winter crop seasons giving agriculture minister Radha Mohan Singh reason to brag about his initiatives at a press conference on 22 May.

But farmers do not measure well being by encomiums showered on them or the heaps of produce at wholesale mandis. What comforts them is the swell of currency notes in their pockets. By that measure they feel let down.

In April, an agricultural scientist at a Marathwada university said on average about three farmers re killing themselves daily in his region owing to inability to repay debts. Most of them were young. The university itself had recommended that farmers grow pigeon pea or tur because of high prices that prevailed the previous year. It had not counted on a record harvest.

In Telangana and Andhra Pradesh, chillies were selling for less than Rs 3,000 a quintal against Rs 12,000 a quintal last year. The price does not even cover the cost of picking, said B Venkateswarlu, Vice-Chancellor of Vasantrao Naik Marathwada agriculture university in Parbhani.

In Bagli near Indore, one came across a tribal farmer who had harvested just six quintals of soybean in 2015. Last year, the farm had yielded about 50 quintals. But her sale price had fallen from Rs 3,380 a quintal to less than Rs 3,000, an unprofitable rate, according to V S Bhatia, Director of the Indian Institute of Soybean Research, Indore.

It is the loss of income that has sparked farmers’ unrest in Maharashtra and Madhya Pradesh.  The demonstration effect of farm loan waiver in Uttar Pradesh has also fuelled it. Chief Minister Devendra Fadnavis has been forced on capitulate. He has agreed to debt relief after insisting he would give agri-inputs free instead. In Madhya Pradesh, the protests have officially, according to news agency PTI, claimed the lives of five farmers in police firing. Chief Minister Shivraj Singh Chouhan wants traders to procure at minimum support prices (MSP), but they are resisting. They want allowances made for poor quality.

Demonetization has also impacted farm incomes. In Sirsi in north Karnataka, cooperatives disbursed just Rs 2 lakh a day to their farmer-members when this correspondent visited the area last November, against Rs 62 lakh earlier. Without cash to buy inputs, farmers took them on loan from traders, who in turn forced them to sell their produce at very low prices soon after the harvest.

What is the way out? The emphasis must shift to ensuring that farmers get remunerative prices for their produce. So far the focus has been on increasing production. While new technologies must be brought in to improve productivity and reduce the cost of cultivation, farmers should also get a bigger slice of the prices consumers pay.

The herd mentality among farmers causes repeated boom-bust cycles. A combination of trade policy and price stabilisation fund is needed to even out price spikes and troughs. Contract farming will help farmers focus on the production aspect without having to worry about prices.

Shenggen Fan, Director of the International Food Policy Research Institute, says in China area under a crop is regulated by the government. That may not be possible in democratic India, but Trilochan Mohapatra, Director-General of the Indian Council of Agricultural Research says disincentives can be created to discourage say, the cultivation of rice, in areas where water is scarce.

Venkateswarlu says there is need for a body, independent of the government, to provide advisories on crops to farmers. These will be based on likely demand and supply conditions, and econometric models.  Universities, like his, he says, lack that expertise which is why the farmers it had advised to grow pigeonpea during the last kharif season have come to grief.

(Photo: Procurement of pigeopea by Nafed in Gulbarga in January,  Photo by Vivian Fernandes)