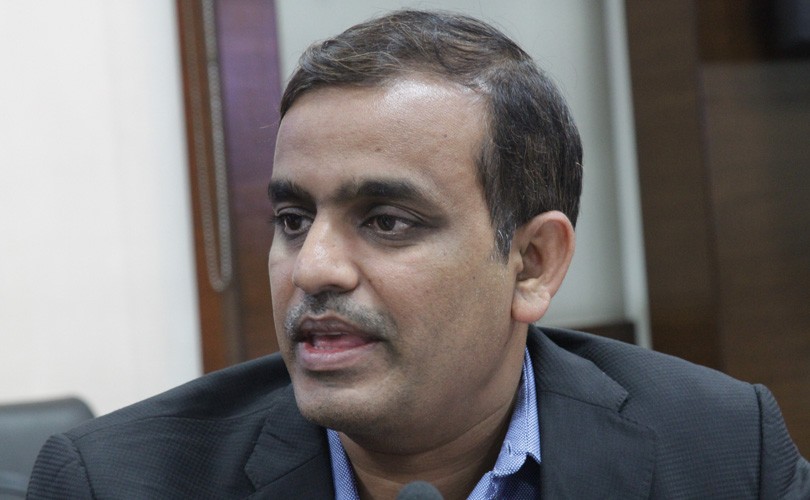 While presenting to the agriculture ministry their analysis of why micro-irrigation covers just 5.5 percent of India’s sown area despite more than 25 years of push by the central government, industry leaders harped on benefits but sought faster disbursal of subsidies to a larger number of farmers.

Shrikant Goenka, MD, Premier Irrigation Adritec, was one of the speakers at the presentation. Photo by Vivian Fernandes.

Surprisingly, they asked for subsidies to be capped at 50 percent of the cost in those states where the coverage of micro irrigation (drips and sprinklers) was higher than the national average, so that money saved could be diverted to laggard states. But they wanted the individual eligibility criterion to be doubled to 10 hectares with tapering subsidy, prompting agriculture secretary Shobhana K Pattanayak to ask why those officially defined as medium farmers (those with 5 ha to 10 ha), who have sampled the benefits of micro irrigation, should require the crutch of subsidies.  (For his response to other points click here).

Industry leaders lamented about India’s low coverage ratio, while pointing to Israel, where 90 percent of the sown area is under micro-irrigation, and also to other BRICS countries like Russia (78 percent) Brazil (52 percent) and China (10 percent).

They referred to an impact study of 5,892 beneficiaries across 13 states conducted last year for the government, which found that micro-irrigation increased water use efficiency by 50 percent to 90 percent, saved 30.5 percent energy, reduced fertilizer consumption by 28.5 percent, increased productivity of fruits and cereal crops by 42.4 percent and by 52.7 percent in vegetables, and raised farmers’ income by 42 percent on average.

But the focus of the hour-long meeting remained on subsidies. They urged the government to deposit subsidies directly in Aadhar-linked bank accounts of farmers. The process of application by farmers, approval by the government, selection of suppliers, installation of equipment, third party audit and disbursal of subsidies should be moved to an information-technology platform as in Gujarat and Andhra Pradesh, they said. States should also have special teams to drive micro-irrigation, they added.

The subsidy of 50 percent to 75 percent for various categories of beneficiaries in Gujarat and of 50 percent to 100 percent in Andhra Pradesh was not helping, industry leaders said. Rather, no more than half the cost should be reimbursed by the government, so a larger number of farmers could benefit.  The wanted micro-irrigation to be made mandatory for crops like sugarcane and 10 percent of the command area of a dam to be compulsorily irrigated with drips or sprinklers.

The subsidy for PMKSY has been increased to Rs 2,340 cr from Rs 1,460 cr last year.  But how much of it will be spent remains to be seen. Last year’s budget allocation was Rs 1,800 cr but 19 percent of it was not spent. Industry leaders said installation of micro-irrigation equipment suffered during the months of April, May and June but the agriculture secretary gave them little comfort, citing compulsions of the Budget approval process.

According to a study conducted by the Centre for Management in Agriculture of the Indian Institute of Management, Ahmedabad, 69.5 million out of India’s 140 million ha sown area can be potentially brought under micro-irrigation. At the current pace, industry leaders said it will take one hundred years to achieve that target.

What they did not perhaps realize is that the focus on subsidies was itself coming in the way. They said there were about 200 manufacturers of equipment and their average capacity utilization was 35-40 percent.  Most of them may have been tempted by subsidies. So equipment selling takes precedence over educating farmers about benefits and getting the best out of their investment.

(Top photo of Randhir Chauhan, MD of Netafim Irrigation India at the presentation in Krishi Bhavan. Photo by Vivian Fernandes)