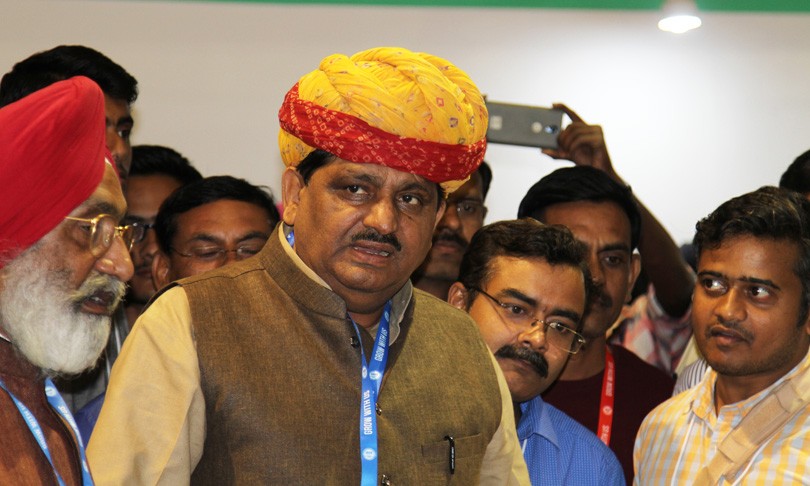 At the agritechnology meeting at Udaipur from 7 to 9 November, the multimedia presentations and the slogans on standees didn’t let one forget that Rajasthan wants to advance with new thinking and new crops (nayi soch, nayi faslein) but in a traditional oilseed where it can make a big difference to a large number of farmers, new thinking is disallowed.

The state’s agriculture minister, Prabhu Lal Saini, boasted about how, despite starting just a few years ago, the state had bested traditional olive-growing countries like Spain, Israel and Morocco in some quality parameters of its extra virgin oil.

He pointed to the cultivation of dates and super-foods like moringa (drumstick), quinoa and chia seeds as examples of a progressive outlook.

In a presentation at the inaugural session of the three-day meet, Principal Secretary for Agriculture, Neelkamal Darbari told farmers that they would be better off by engaging in dairying, poultry and beekeeping, rearing Japanese quail, breeding ornamental fish for aquariums and doing pearl culture.

Chief Minister Vasundhara Raje arrived nearly two hours late for the inaugural, as royalty did at one time, and sought validation through applause from her farmer-audience for her many initiatives like interest-free crop loans. She impressed upon them how agro-tourism, cultivation of medicinal plants, organic farming and protected agriculture in polyhouses could boost incomes.  The meet saw 17 MoUs being signed, including one for soil-less agriculture.

But the state which is the No. 1 producer of mustard, with nearly 47 percent of the national output, is dead set against the genetically-modified mustard hybrid, DMH-11, which the Genetic Engineering Appraisal Committee (GEAC), the regulator, had recommended for cultivation, in May. If the state had pushed, environment minister Harsh Vardhan may have given his approval, instead of putting the file in a deep freezer marked “Pending Further Review.”

Saini asserted that he would make a determined effort to ensure that no trials of GM crops took place in the state. When asked why, he said if one hurried with new technology one would have to repent at leisure, ignoring the fact that GM crops have been cultivated for two decades without any harm to humans, animals and the environment being reported.

Talking to media persons, he made the startling claim that the mere touch of Bt cotton causes impotency. Bt cotton is genetically-engineered to be toxic to bollworms, a deadly pest. It has been extensively grown in India since 2002 and covers about 90 percent of the cotton-growing area. Six institutes of the Indian Council of Agricultural Research had told a parliamentary committee earlier this year that fish, chicken, goats, sheep and cows fed with cottonseed or its derivatives like oil cake had not come to any harm.

Saini explained to journalists that the toxic Bt gene was extracted from a soil bacterium found in Hiroshima and Nagasaki after atomic bombs were dropped on the two cities during the Second World War. The fact is, a Japanese scientist discovered the insecticidal properties of the Bt soil bacterium in 1901 and Bt formulations have been used in bio-pesticides since 1938.

When told that DMH-11 did not have any toxic gene and genetic modification technology was being used to produce more efficient hybrids in a plant with was self-pollinating, Saini said new technology usually begins with promise but gradually the side-effects overwhelm the benefits. Aspirin, he said, was prescribed as a blood-thinner for cardiac patients, but apparently that is no longer the case. The Green Revolution had oppressed “mother earth” with chemicals, he said, hence the state’s emphasis on organic farming.

Saini said Rajasthan’s farmers were getting a yield of 30-32 quintals of mustard per hectare with existing seeds so there was no need for GM mustard hybrids. He would not accept that Rajasthan’s mustard yield was much lower. According to the agriculture ministry’s statistics, the state’s five-year average was 12.33 quintals per hectare, despite about 90 percent of the mustard crop being irrigated.

But then Rajasthan seems to have decided that it will be choosy about new thinking in agriculture and will apply it to select crops.