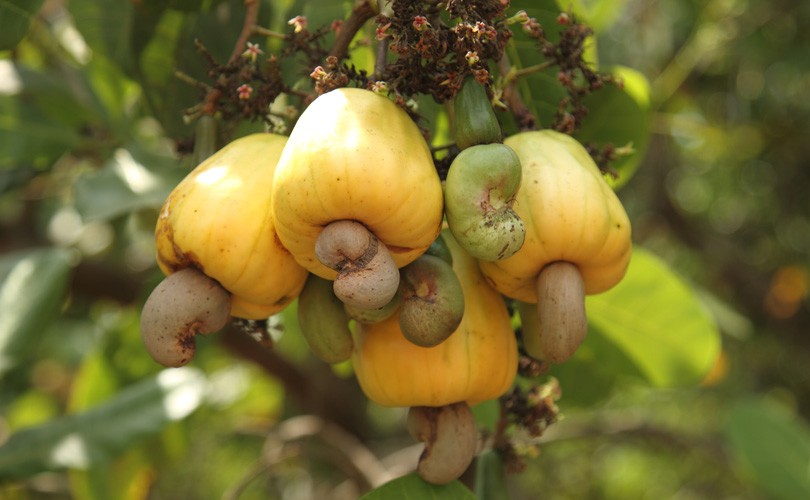 There is growing demand for cashews both within India and abroad which is being met through imports of nuts. Indian scientists have developed 42 high-yielding varieties but they are not widely adopted. Contract farming by a private company like McCain or a cooperative like NDDB or Campco could boost the cashew economy, reports Vivian Fernandes from Mangaluru. This column was first published in the Financial Express.

Just five kilometres from Mangalore (now Mangaluru) city centre, off the highway to the Jain pilgrimage centre of Moodbidri is a bus stop called ‘Company.’ Those in the twenties do not know why it is called so. All they can see at the location is an unfinished mall─ one million square feet of built up space in a thrifty city that lives on remittances ─ a monument to easy money before the 2008 financial crash.  But their elders would recall that it sits on the site of a cashew curing factory, one of many that dotted the city with names like Pierce Leslie and Aspinwall, and provided a livelihood alternative to women from rolling beedis. The factories used to process cashewnuts obtained domestically and procured from Africa. But after African countries set up their own units, the factories became unviable and went the way of another activity the city was known for: Mangalore tiles.

Sadly domestic production is stagnating, says P L Saroj, who heads the Directorate of Cashew Research at Puttur in Dakshina Kannada district, despite good export and domestic demand for kernels which are relished as they are or as barfis and katlis, those markers of happiness.

India grows cashew on 10.5 lakh hectares mainly in coastal states but also in Chhattisgarh, Jharkhand, and North-east India. It is a hardy crop that requires very little water but can survive both very heavy and low rainfall. Perhaps because it is not fussy, it is treated with disdain and grown on land which other crops would spurn.

Since the crop is regarded as a bonus, not much attention is lavished on it. The orchards are mostly seedling, not grafted, ones.  The directorate recommends high-yielding varieties; 42 of which have been developed over the past decade, but have not been widely adopted. It says it has limited outreach. This is an excuse trotted out by most institutes of the Indian Council of Agricultural Research (ICAR). The director of a Nagpur-based ICAR institute said the job of scientists was to develop relevant varieties; it was up to farmers to approach them. This is in contrast to say, Israeli agricultural scientists, for whom popular acceptance is a gauge of their success.  The directorate has also developed a package of practices but most cashew farmers would be unaware of them. For instance, with conventional spacing 125 trees can be planted on one hectare. With high density planting the number can go up to 400. This requires constant pruning. Ultra high density planting of 600 plants per hectare is possible, provided dwarf varieties are developed.

India’s productivity is therefore 706 kg per hectare while that of South-east Asian countries like Vietnam is about 3,000 kg per ha. Saroj says they have planted better varieties, their acreages are small and therefore well managed and there might be some statistical jugglery involved: procured nuts are counted as domestic production. But there is a sizeable gap which India should bridge.

This can be done by ensuring that farmers get a higher share of the retail value. A kilogram of kernels sells for Rs 600 and it takes four kg of nuts, each kg selling for Rs 80-120, to produce them. The price is good and has made cashew more attractive to grow than rubber or arecanut. The directorate encourages farmers to process the nuts at the farm. Steam boiling is the preferred practice in place of drum roasting and oil bath roasting that were in vogue earlier.

The oil refers to CNSL (cashewnut shell liquid), a corrosive fluid used in polymer industries. Other by products are cashew apple pulp or pomace, which is a nutritive feed for animals and can also be used as filler in jams and jellies.  The juice is rich in Vitamin C but ferments quickly. There were reports of PepsiCo India intending to blend it with other juices, but the company says it is not pursuing the idea. In Goa, cashew apples are fermented to produce feni, for which the state has obtained a Geographical Indication. But other states do not allow feni to be distilled at home. Saroj says the sugar molasses lobby is an impediment.

India can do more to tap the potential of cashews and bring additional income to rural areas. An Amul-type dairy cooperative or a Campco-type cocoa cooperative can help. If an enlightened private sector company modelled on McCain, a global supplier of potato products to McDonalds, the cashew economy would get a big boost.

(Top photo of cashews at the Directorate of Cashew Research, Puttur near Mangaluru by Vivian Fernandes)