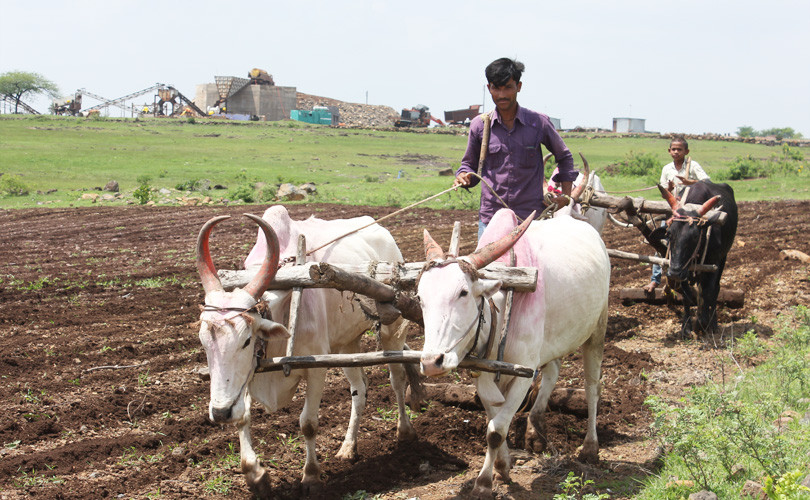 The drought in Marathwada is quite acute. As of 23 September, the rainfall deficit in the eight districts constituting the region was 36 percent against 28 percent for the whole of Maharashtra and 13 percent deficit across the country. Rains latterly in the region have reduced the shortfall. July, which is a crucial month for crops, was almost dry. But rains in September have infused hope in farmers, proof of which is the photograph above of a field being ploughed in Patoda taluk of Beed district. Vivian Fernandes traveled to Marathwada in the third week of September to bring you this report.

Ganesh Chaturthi brought good tidings to Marathwada. Rains began at 7 pm on the eve and continued till 9 am on 18 September. Parbhani, one of Marathwada’s eight districts, received slightly less than 20 percent of the season’s rainfall in just one day. Pictured above: people fishing in the back flow of a dam along the Jalna-Parbhani road. All photos on this page by Vivian Fernandes.

The damage inflicted by the prolonged absence of rain during crop growth stage is quite visible in the cotton field above. The gaps have been caused by seeds that did not germinate or sprouts that wilted in the heat. July, which was a crucial month for crops was almost dry. Aurangabad district, which has received 363 mm of rain from June to 16 September, got 291.5 mm in June on twelve days. In July, there was only one day, when it rained 27 mm and on five other days the drizzle added up to 9 mm. We came across cotton fields where plants were about a foot and a half in height when they should have been five foot tall. Bolls were a tenth of the number found in healthy plants (see  photo below)

Shown above is an experimental field at Vasantrao Naik Marathwada Krushi Vidhyapeeth’s station in Aurangabad. B Venketeswarlu, Vice-chancellor of the university says area under cotton in Marathwada has stabilized; it is not rising as in the past. But some farmers complain of high hybrid seed prices. They also use expensive chemicals indiscriminately to control sucking pests, when cheaper alternatives are available and lesser quantities are needed. On 18 September, the university launched an app, a ready reckoner for farmers of the region on cotton pests and diseases.

Venkateswarlu says new cropping patterns have fed rising aspirations but these are not climate resilient. Traditionally- grown crops like pigeonpea or tur  (shown below) inter-cropped with cotton

were more drought tolerant than soyabean. Sugarcane is another crop that draws a lot of water in a water-scarce area. There are 25 sugar mills and another 15 are awaiting license, he says. Since it is not possible to cap the area under cane, Venkateswarlu suggests that cane must be compulsorily irrigated with drips. The university has recommended safflower or Khardi oil seed, jowar and Bengal gram or chana as crops for the coming rabi season.

Landless farm workers like these Bhil tribals of Therla village in Patoda taluk of Beed often go to sleep hungry as there is not enough wage-earning work. This also reflects on the failure of the village panchayat in making MNREGA work available to them, The photo alongside shows Bhils plucking whatever little green gram or moongbean has been spared by the drought. They said they were looking forward to working the cane fields in western Maharashtra.

With crops failing there is little fodder available for cattle. Nanubhai Dasharath Hatagale, 61, of Hivarshinga village in Beed’s Shirur taluk said she was paying Rs 3,000 for jowar stalks that lasted just eight days between her three oxen. Farmers have resorted to distress sale of cattle. For the sellers, this is an emotionally-wrenching experience. Pictured here is Sarjerao Rampawal, 61, of Naogaon Rajuri village of Shirur taluk. His two sons have migrated to Pune. Migration is an escape chute. It helps people cope with the rigours of the drought.

The impact of the drought has resulted in a shortage of drinking water.  According to the Times of India, 1,249 tankers were in operation on 10 September.  By 23 September their number had fallen to 815.  But women of Utkanda village in Patoda taluk of Beed district (pictured here))

said they had to walk a kilometre to fetch drinking water. The sarpanch of the village said tankers had been pressed into service in the village for three days during Chief Minister Devendra Fadnavis’s visit but had disappeared after that.

The people of Marathwada cannot be faulted for not conserving rain water. The terrain is dotted with check dams. Under the Jal Yukt Shivar water bodies are being revived. The farm pond scheme is also laudable, but Venkeswarlu says it is not being implemented correctly. Farmers build ponds at an elevation into which they pump in water from bore wells. In other words, ponds are being used as reservoirs to irrigate fields when there is no electricity. Rather, they should be set up in depressions to collect rain water run-off. The state also subsidies open wells. A number of them have been dug. Venkateswarlu says they help recharge the aquifers. It is bore wells, he says, that should be discouraged as they deplete ground water.