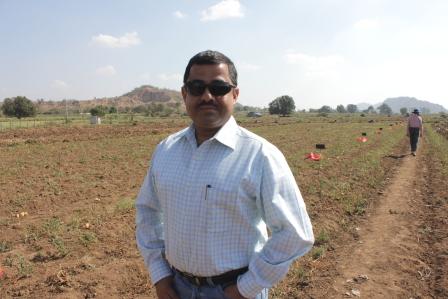 By banning export of potatoes in years of short supply, the West Bengal government has acted in the interests of consumers but the unintended consequence has been to scare away a US pioneer of frozen potatoes, Simplot Foods India, from the state reports Vivian Fernandes after meeting company executives in Gujarat. A version of this story was first published in www.firstpost.com.

The Trinamool Congress government’s readiness to ban exports of potatoes whenever prices shoot up within the state has had a chilling effect at least on one investor. Simplot India Foods, which is one of the worldwide suppliers to the American fast food chain McDonald’s has decided not to do contract farming in West Bengal because it is not sure that the state will allow potatoes to be taken out to feed its plant in Gujarat.

‘For me West Bengal would present a risk. A political risk where at the turn of a tap the government may stop potatoes from coming to you,’ Nikhil Tandon, Simplot India Food’s director said when we met him at a farm in Banaskantha district’s Iqbalgarh village, close to the Rajasthan border.

Simplot India Foods is the subsidiary of J R Simplot Company, an Idaho (US) based $5.8 billion private business and pioneer in frozen potatoes. It also into mining, fertilizer, ranching and beef production. The company was in the news  after the Food and Drug Administration said that six varieties of its genetically-altered potatoes were as safe and nutritious as their conventional counterparts.

The potatoes were less likely to form black spot bruises because certain enzymes in them had been lowered.  Lower levels of an amino acid called asparagine and lesser reducing sugars resulted in reduced production at high temperature of acrylamide, which has been found to be cancer-causing in rodents, the FDA said in a press release.  The potatoes to be sold under the trade name ‘Innate’ do not have a foreign gene in them. The altered genes are from domestic potatoes varieties.

‘I do not think there is any plan to introduce them into India,’ Mark Heap, biosciences manager with the company’s Australian subsidiary said.

Simplot India Foods has settled on Gujarat after scouring Madhya Pradesh, West Bengal and central and northern Odisha. MP’s land holdings were too small. ‘The investment climate here (in Gujarat) is really very pro-active. There were suggestions made to us about what we could and could not do and that helped us in our decision making.’

Freshly dug up Simplot Potatoes in a Gujarat farm

The company has been working with farmers for three years. The trend is for food processors to move out of contract farming. They prefer to buy through vendors because it means lower investment of company time, people and money. Tandon said Simplot would not follow the herd. ‘As a new entrant in this market I am a firm believer in contract farming,’ he said. ‘Yes you ride the ups and downs of prices but you build relationships and it is all about building relationships with farmers.’

In Gujarat, McCain, a Canadian supplier of potato products to McDonald’s and an own-brand seller of fries, tikkies and rice idlis, has come in for praise from farmers for its engagement with them. It has taught them new ways of cultivating potatoes including the use of micro-irrigation.  (See that story on this website).

Tandon said buying through vendors was a ‘lazy man’s model. It is introducing the same trader things, the APMC (or government mandi) market concept in commercial buying and while a lot of traders may not like what I say the value addition they bring to the party is a questionable thing.’

Contract farming gives the company the ability to trace chemicals and pesticide residues that go into its inputs. That is important to avoid a consumer blowback over food safety.

Tandon admitted that contract farming would not be viable in the short run. It would take seven to ten years for it to pay back. He said PepsiCo’s Frito Lay division (which makes potato wafers and extruded products) and McCain were not making money. (Tandon’s statement has not been independently verified- Ed).

Tandon said Simplot’s processing factory in Gujarat would not do only potatoes, though those would be at its core. ’There were other value added products in Simplot’s suite which are not readily available in the Indian market and were convenient to cook. ‘We have a $1.5 billion business in Australia which is all about a variety of offerings right from sea food to other proteins to frozen vegetable, and derivative of potatoes to a mix of other elements.’  He did not disclose the location of the plant citing confidentiality.

Mark Heap (right) and Nikhil Tandon at a field in Gujarat.

Mark Heap said initially he was ‘horrified’  at the cold storages, but his opinion has changed over the past three years that he has been visiting India. He was praise for farmers as well. ‘The production of potatoes here in Gujarat is surprisingly good considering the environment. The days are not very long during winter time, the growing season is short. We find is that the specific gravity or dry matter of the potatoes is good, quite good and the quality is excellent.  We are very encouraged.’

He said he had not worked with very small farmers in India, but was impressed with those he was working with. ‘I am surprised at the level of technology that is available, the use of drip irrigation, plant nutrition.. it is very good’

Tandon said the farmers in Gujarat they were working with would rank in the top quartile globally. ‘And if I were really aggressive and really optimistic I would put them in the top decile which is the top ten percent in terms of yields in our trials of commercial crops in Gujarat this year.’

But Amribhai Becharbhai Patel, 44, a B.Sc in agriculture and a Simplot contract farmer said he could not rely entirely on the advice he got from the foreign companies. ‘In Indian conditions we have to apply our knowledge because growth happens in different conditions.’ He said the varieties that grow in 135 days in very cold weather take 85 days here. ‘So we have to mix and have to do a little bit of our own thing.’