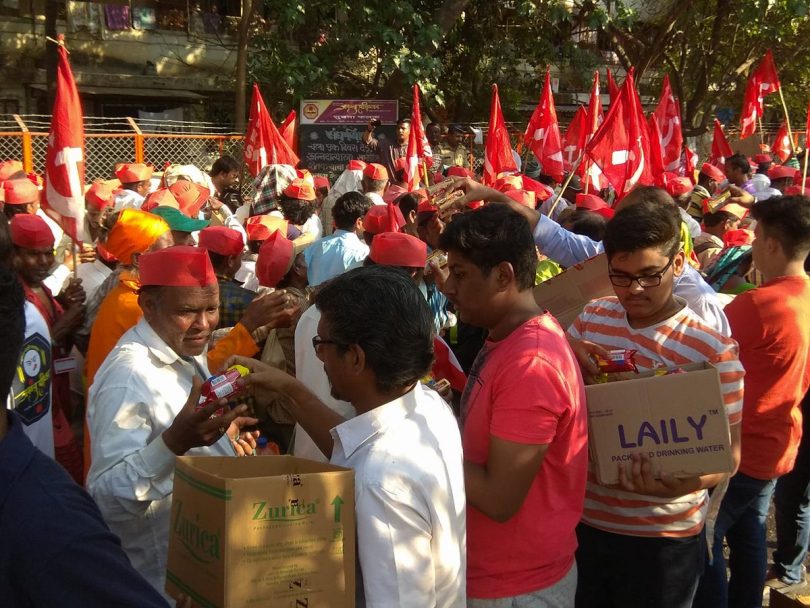 Vivian Fernandes reports on the march of tribals and farmers from Nashik to Mumbai and what made the Devendra Fadnavis government to capitulate. A version of this article was first published in www.thequint.com

A striking aspect of the “Long March” of tribals and farmers that began in Nashik on 6 March and ended in Mumbai’s Vidhan Soudha precincts on 13 March was their concern for fellow-citizens despite the hardship that had forced them to undertake the 180 km walk, enduring hot sun and sore feet. (Incidentally, the “Long March” is an allusion to the 10,000 km trek undertaken by Chinese leader Mao Zedong and his team of communist revolutionaries in 1934-35 to regroup and fight against the nationalist Kuomintang led by Chiang Kai-shek, who later fled to Taiwan).

This was in contrast to the hooliganism that one saw during Haryana’s Jat agitation for job reservation in February 2016 and the violence that attended on the farmers’ agitation at Mandsaur and Indore in Madhya Pradesh last June. In September, farmers pouring into Bengaluru from Kolar and Chickkaballpur broke police barricades and caused much damage. 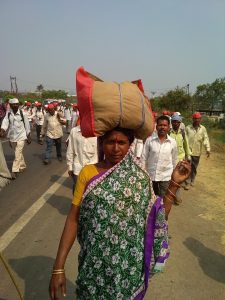 The last leg of their journey in Mumbai towards the Vidhan Souda was covered at night on the 12th, as the Maharashtra agitators were keen not to inconvenience students taking the Secondary School Certificate examination the next day. “We felt they were our children” says Ashok Dhawale, a medical doctor by training, and President of Communist Party of India- Marxist’s (CPIM) All India Kisan Sabha (AIKS), which organized the march.

The fortitude, orderliness and restraint of the agitators in the face of debt, and deprivation of titles to forest land they had cultivated for generations, drew a spontaneous outpouring of sympathy from the public at large. The sight of  tribal stragglers, having to knock on the legislative assembly for their rights was heart rending. The stream of red shirts, flags, topis and turbans meandering through the roads of the state was a riveting spectacle and an indictment of the Maharashtra government.

Sensing the mood, Chief Minister Devendra Fadnavis readily conceded their demand for extension of loan waiver, and quick implementation of the Forest Right Act, 2006 which gives tribal farmers title to a maximum of 10 acres of land they have been cultivating. This time the state’s Chief Secretary gave them an assurance in writing, which was tabled in the legislative assembly. “It is part of the record of the proceedings,” Dhawale said.

Vijay Jhawandhia, a farmer leader from Wardha and one of the founders of the Shetkari Sanghatana (now estranged) said it was the strong tribal contingent in the march and the justness of their demand, that forced the government’s hand.

The decision to undertake the march was taken at a meeting of AIKS at Sangli on 16 February. Jiva Pandu Gavit, CPIM MLA from Kalwan, Nashik said his son, Indrajit, had mooted the idea. When he placed it before the other leaders, some said the march was not do-able because of the distance and the logistics involved. (Indrajit is a party member and an office-bearer in a taluka panchayat).  Once the decision was taken to go-ahead a campaign was launched to register farmers. At any time there were 25,000 marchers, Dhawale said. The numbers swelled along the way and almost doubled in Mumbai. Most of the marchers were from Nashik. They also came from Palghar, Ahmednagar, Pune, Thane and Nandurbar. 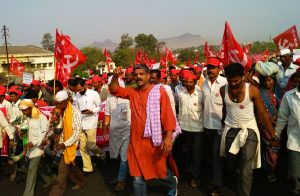 Contributions of rice, dal and oil were collected before the march. The route was surveyed three times and the halts were marked. About 12 tempos loaded with food, firewood and cooking utensils accompanied the protesters. They would set out with cooks early in the morning and reach the designated halts by about 8 a.m. The food would be ready by the time the marchers arrived at noon. About 15-20 km would be covered in the morning and the same distance after lunch. The marchers relieved themselves along the roadsides except in Thane and Mumbai where arrangements had been made with municipal corporations for mobile toilets.

Gavit said there were no sponsors. The marchers were self contained. But the Peasants and Workers Party sent about two lakh rotis. Dadaji Bhuse, Shiv Sena MLA from Malegaon Outer Constituency, greeted them along the way. In Thane, Eknath Shinde, PWD minister and Shiv Sena MLA from Kopri-Pachpakadi constituency arranged two ambulances, a water tanker and bottled water. When the marchers entered Mumbai, people welcomed them with refreshments, Gavit said.

Unlike Kirori Singh Bainsla, leader of Rajasthan’s Gurjar agitation, Gujarat’s Patidar leader Hardik Patel, Jignesh Mevani, the state’s Dalit leader or those of the Karni Sena protesting release of the film Padmavat, the leaders of the march were conspicuously visible.

Dhawale hails from a family of medical doctors.  He is based in Thane and cut his political teeth in the Students Federation of India while studying medicine in Mumbai, and doing his MA in political science from Mumbai University. He joined the AIKS in 1993, inspired by Godavari Parulekar, who led the pre-Independence Warli Adivasi revolt. Last year he became president of AIKS. Jiva Pandu Gavit, a tribal and the sole communist in the Maharashtra Assembly is said to be the force behind the March. He was able to mobilize a large number of tribals, reports say. Ajit Nawale State Secretary of the Sabha and Kisan Gujar, its Maharashtra state president were the other leaders.

Maharashtra farmers (and those of adjoining Gujarat, Rajasthan and Madhya Pradesh) have been restive for some time. In the past four years, Maharashtra has seen three years of negative agricultural growth because of successive droughts. A year of plenty saw prices slump in pulses. Cotton has been damaged extensively by the pink bollworm.

In June last year the state’s farmers struck for 11 days. They refrained from selling milk, vegetables and fruits to cities, resulting in the state announcing a loan waiver. In March 2016, thousands of tribal farmers sat-in at the Nashik collectorate to press their demands. In October 2016, they laid siege to the Adivasi development minister at his residence in Palghar.

Dhawale admits that loan waiver will provide temporary relief. The solution to agrarian distress, in his view, is the “complete abandonment of neo-liberal policies followed since 1992.” These policies, he says, have led to 4 lakh suicides of farmers, 70,000 of them in Maharashtra alone.

By neo-liberal policies, Dhawale means open cross-border trade in agricultural commodities and the sale of inputs (like potassic and phosphatic fertilizers) at market prices.

But open trade actually helped Indian farmers during the global commodity boom of the last decade. It is only after 2013, when commodity prices slumped that farmers have suffered. Domestic policies that privilege the interests of urban consumers over those of farmers must be blamed too. When prices rise, the government shuts the door or exports to quell prices, but when they slump, it does not provide price support. Farmers suffer on both counts.

The Maharashtra government told the agitators that the centre has given a commitment to procure cereals, pulses and oilseeds at cost plus 50 percent. By “cost” Dhawale means all cash expenses incurred in production, the imputed family labour cost and also the rental value of land. But economist Ashok Gulati has shown that this will raise the minimum support price of groundnut, soyabean and maize by 40 percent. If procured at those prices, they will have to be sold at a loss. Assured procurement at such prices will make farmers ignore market signals and grow crops regardless of demand.

Instead farmers should be assured of irrigation. This is the best insurance against crop failure. Large river-linking projects, which the government proposes, will be disruptive. The AIKS has given a proposal for small dams and lift irrigation. Construction of wells on a large scale, harnessing of rain water and micro-irrigation for frugal use of scare water might be better solutions.

Farmers also need to be provided with seeds that are resilient, that is, those that can survive long dry spells, or resist pest and disease attacks. The most promising technology is genetic modification, but both the communists and the BJP government are opposed to it, even though farmers are adopting these technologies clandestinely.

Tribal farmers need to be given land titles quickly. Dhawale says thousands of applications have been rejected, and even when accepted titles are given for half-an-acre or one acre. He attributes this to the callousness of officials and the apathy of government leaders. He says the government will be held to its promises this time, and its action will be monitored.

Most tribal farmers do subsistence farming. They grow rice and ragi (finger millet) for a part of the year, and migrate to cities for jobs. Till conditions are created for profitable agriculture, giving them a monthly relief cheque, to relieve distress might, be a better option.

(Top photo: The marchers being given refreshments. Photo courtesy AIKS)