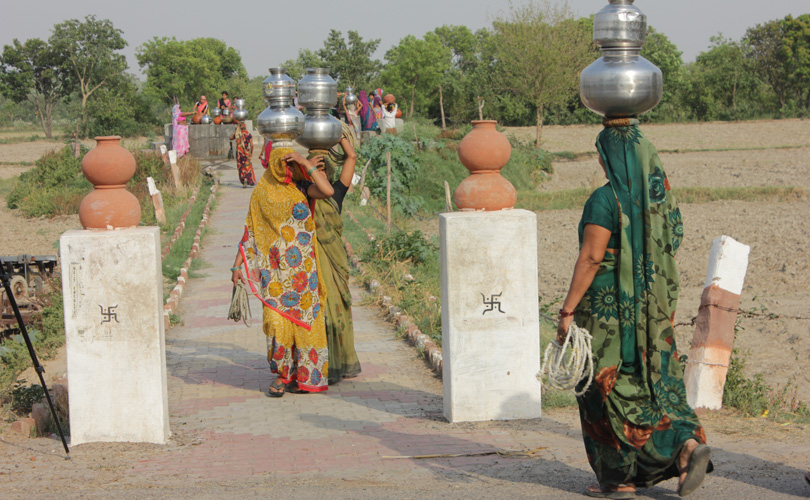 After hailstorms and rains earlier this year damaged the wheat crop in most parts of India, there was a torrent of media reports about Indian farmers being left to fend for themselves and agriculture, one of the riskiest economic activities, lacking an effective protective shield.

So it would come as a surprise that India runs the largest weather-based crop insurance scheme (WBCIS) in the world with 13 million policy holders. Thirty-five million farmers in all had agricultural insurance in 2013-14, according a presentation by Kolli Rao, former chief risk officer at the Agriculture Insurance Company of India (AICI).

But more farmers are left out; those included find the cover too thin and payments arriving too late. They see insurance as the necessary pain of getting a crop loan (since it is mandatory), more useful for banks than to themselves.

This, despite the government paying 60 to 75 percent of the premium, and the two existing schemes turning in a profit, unlike past loss-making ones.

Mathura District Collector Rajesh Kumar in his office on 5 May, 2015.

The farmers we spoke to in Mathura and Aligarh, two of the worst affected districts, were either ignorant of crop insurance or had not benefitted from it.  They were pinning hopes on calamity relief. The district collector of Mathura, Rajesh Kumar, had assessed the compensation required at Rs 471 cr on the basis of the centre hiking the rate by fifty percent. The state government had also pitched in with its share.  Quality norms for wheat procurement had also been relaxed.

Crop insurance has engaged our leaders since the time of Independence. There was a debate in Parliament in 1947 when Rajendra Prasad was agriculture minister and a study was made that year. A bill was introduced in 1965 but states, not wanting to pick the tab, had opposed it. In 1972, General Insurance Corporation started with insuring H-4 cotton and later groundnut, wheat and potato.  It was wound up in 1979 because of huge losses.

In 1985, a countrywide crop insurance scheme was introduced for the first time.  By the time it was closed in 1999, it had paid out Rs 22,000 cr or seven times the premium income. The one that followed narrowed down the outgo to Rs 28,000 or three times the premium earned.

The ones currently on offer have turned in modest profits.  Of these, the modified National Agriculture Insurance Scheme (mNAIS) insures against yield losses. Claims are also paid when sowing is prevented because of adverse weather, say, lack of rain.

The other scheme is weather based where claims are triggered (regardless of actual loss) when crop sensitive weather parameters like rainfall, temperature, wind or humidity deviate from the historical standard for that area.

Agricultural insurance is not easy or cheap to administer because there are millions of small holdings. Most farmers also do not have the capacity to pay.  Ideally, every policy holder’s loss must be individually assessed but that will drive up the cost of insurance so enormously as to make it unaffordable or unviable. Hence, losses are estimated on the basis of crop samples. To reduce costs, these were done across a district or a block but wider the area, greater the chances of losses being ignored or inadequately compensated.  Under the modified scheme, the area for taking crop samples has been narrowed down to clusters of villages, but states are balking at paying the cost.

Insurers also need to be vigilant against fraud and sloth. They must ensure that the insured crops are actually sown, that there are grown over the area declared, and policy-holders are not neglecting them because they are cushioned. The yield estimates of the sample crop cuttings must not be deliberately or negligently suppressed.

K P Narayana Kumar reports of ‘endemic fraud’ in Gujarat, Maharashtra, Karnataka, Andhra Pradesh, and Tamil Nadu on the basis of his conversation with top executives of AICI. In Gujarat’s Mehsana district, he writes, some farmers had collected claims which suggested that their groundnut yield was 32 quintals an acre, when a recheck revealed it was 450 quintals.

The AICI executives told Rao ‘there are districts where farmers only harvest insurance claims.’  These include Dharwad and Haveri in Karnataka, Sivaganga and Nagapattinam in Tamil Nadu, Aurangabad and Jalgaon in Maharashtra, Gujarat’s Surashtra region and Rayalaseema in Andhra Pradesh. Under political pressure, bank managers would give multiple loans and insurance cover for crops grown on the same plot of land in the names of various family members, he adds.

In  Punjab, Haryana, Western UP and Madhya Pradesh, Rao writes, there is little awareness and a poor record of getting crop insurance implemented.

Weather-based insurance jumps over these hurdles, but the weather index has to be well-correlated with yields for it to be effective. The country must also have a dense network of weather stations and gauges. Currently there are 5,000, but more are needed.

Till such time as the infrastructure is created, Ramesh Chand, Director National Centre for Agricultural Economics and Policy Research (NCAP) prefers calamity relief by the government.

Ashok Gulati, an agricultural economist, who held several government positions, makes a case for enhanced cover – an average of Rs 30,000 per hectare as sum assured – and universal agricultural insurance, covering 100 million ha. He wants two-thirds of the annual premium – Rs 10,000 cr – to be borne by the government.

But that might go the way of other welfare schemes like Nrega, the make-work rural jobs scheme, providing yet another opportunity for officials and unscrupulous farmers to indulge in grand theft.

Pramod Kumar Aggarwal, an insurance modeller at IWMI, an international water management agency, believes existing insurance schemes can be refined to better meet the needs of farmers without straining government finances.  He says available techniques and technology, crop simulation models, data bases and remote sensing can help. ‘Somehow the science has not been used adequately in developing insurance products,’ he says. ‘Fortunately that is happening now. So we can expect better products.’

He proposes a double trigger scheme, in which the initial payment is triggered on the basis of weather indices, and the final settlement is done based on yield index.

But insurance is not a lasting solution. Extensive irrigation and crops resilient to climate change are.

KISAN LAUNCHED: On 5 October, 2015, the government launched KISAN, a project that uses satellite and drone based imaging for improvement in yield estimation and better planning of crop cutting experiments. This will make crop insurance more effective.

The pilot will be launched in one district each of Haryana, Karnataka, Madhya Pradesh and Maharashtra during Kharif season 2015 and two districts in each of these states during Rabi 2015-16. If successful, it will be extended countrywide.

An Android application has also been launched to photograph hailstorms and fix their geographical coordinates, that is latitude and longitude. This will help in deciding crop loss quickly and more objectively.

(Women at a community well in Mathura on 5 May, 2015. More covered than India’s crop insurance. Photo by Vivian Fernandes)