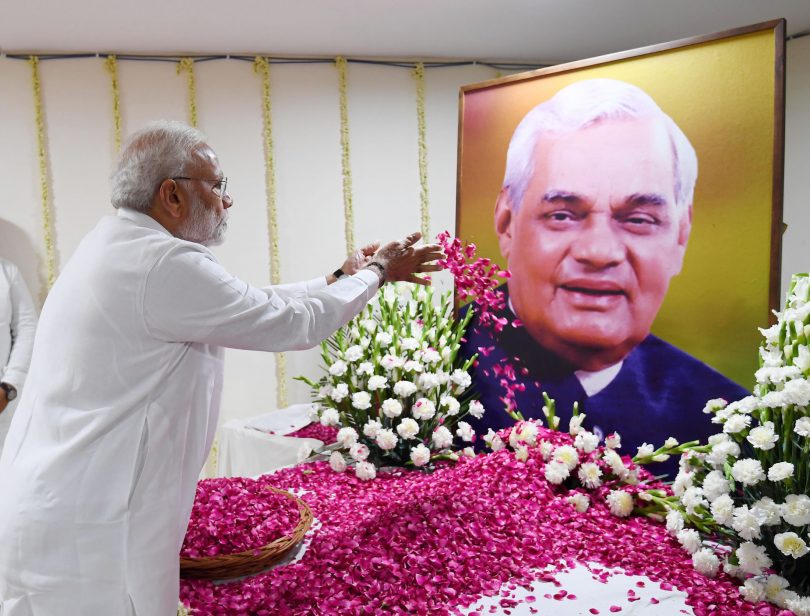 Vivian Fernandes reports on a prime minister who approved India’s first – and only – genetically-engineered crop for cultivation despite opposition from many quarters. This piece was first published in thequint.com.

It was 2003 and the last day of Prime Minister Atal Behari Vajpayee’s visit to China. Press persons were waiting eagerly at the Shanghai hotel where he was staying for his assessment of the visit. Atypically, they were quiet. (In the erstwhile USSR such occasions apparently meant a KGB agent was born). Presently, Vajpayee waddled in. He sensed the mood and said, “Sabko jaana hai.” Then, after what seemed like an eternity─ he was given to long pauses─ “main aaj hi jaa raha hoon.” Laughter rippled through the audience. Vajpayee could be self-deprecating.

Vajpayee could also be decisive minus the tough talk and demeanour. It was while he was prime minister that India’s first and (so far) only genetically-engineered (GE) crop ─ insect-resistant Bt cotton─ was approved for commercial cultivation. I remember as a journalist with the business news channel CNBC-TV18, interviewing Manju Sharma, the Secretary of the Department of Biotechnology in 2002. She was clear that it should be approved and expressed her views freely unlike latter-day officials, who lack conviction in the technology, or the courage.

To Lal Bahadur Shastri’s slogan, ‘Jai Jawan, Jai Kisan,’ Vajpayee added, ‘Jai Vigyan.’ And so at the 32nd meeting of the Genetic Engineering Approval Committee (GEAC), on 26 March, 2002, the committee gave its nod for the mass cultivation of three GE cotton hybrids. But a fourth hybrid was not given approval because it had been tested only by Mahyco (Maharashtra Hybrid Seeds Company) ─ the applicant and a partner of Monsanto from whom it had obtained the technology─ but not by the Indian Council of Agricultural Research (ICAR).

NGOs opposed to GE technology like to portray the GEAC as a bunch of cheerleaders for the technology, riddled with conflicts of interest as they put it, and ever eager to approve GE crops. That’s not so. At the 26th meeting of the GEAC on 19th June, 2001 Mahyco was told to “repeat” the trials, and ICAR was also asked to conduct them separately so that a set of data independent of the developer could be obtained.

At the March 2002 meeting, Bt cotton was approved for mass cultivation. But the approval was conditional. It was valid from April 2002 to March 2005.  Further extensions depended on how the crop performed in farmers’ fields.

Observers say GEAC was forced into quickening its approval because impatient farmers in Gujarat, driven to rack and ruin by the American bollworm, had planted unapproved Bt cotton clones of the ones awaiting regulatory approval.  These were resistant to the pest. The seeds were supplied, illegally, by Navbharat Seeds, owned by D. B. Desai, a plant breeder. The GEAC ordered the illegal crop to be destroyed but Gujarat’s Narendra Modi government did not oblige. It couldn’t risk farmers’ wrath.

A farmer with a large holding in Yavatmal in Vidarbha, and member of Sharad Joshi’s Shetkari Sanghatana, said he was among those who had gone to Gujarat to smuggle the pirated seed and supply it cotton growers in Maharashtra. They were exasperated by the long-winded regulatory process. Joshi, who is no more, believed that Indian farmers would prosper if agricultural markets were free and they had access to technology.

Bt cotton now covers 96 percent of India’s cotton area. It has made India the second largest exporter (from being an importer) and the largest-cotton producer in the world. Unlike wheat and rice, where public sector research has played a key role, India’s success in cotton is entirely a private-sector effort.

Initially, Mahyco made the mistake of pricing Bt cotton too high. It sold a packet of 450 grams of Bt cottonseed for Rs 1,800, of which Rs 1,250 was the trait fee. When farmers protested, the Andhra government imposed price control. Other governments, with exceptions like Punjab, followed. In 2016, the agriculture ministry decided to control the price centrally and fixed it at Rs 800 per pack. The trait fee was reduced to Rs 49.

The agriculture ministry is playing the nationalist versus multinational game. But when Monsanto offered to sell Bt cotton technology to the government in the early 1990s for Rs 63 cr it declined. Pushpa Bhargava, the influential founding director of Hyderabad’s Centre for Cellular and Molecular Biology (CCMB) said in an interview in January last year that he had prevailed on the government. He had offered to develop the technology through Avesthagen for Rs 3 cr. Avesthagen, a life sciences company, was founded by Villoo Morawala Patell and Bhargava was its chairman. The government did not accept Monsanto’s offer, compelling the company to introduce the technology through Mahyco.  Bhargava became a bitter opponent of Monsanto and the patron of anti-GM activists. The government acted unwisely, but carps that Indian farmers are paying too much to Monsanto as royalty.

Modi was the chief minister of Gujarat when Bt cotton cultivation began in the state. That would not have happened but for Vajpayee. In his blog condoling the former Prime Minister’s death, Modi says Vajpayee is his guru. If that were the case, like him he must chose technology over timidity and approve genetically-engineered mustard and brinjal.

(Agricultural economist and former Chairman of the Commission for Agricultural Costs and Prices Ashok Gulati writes in the Indian Express that Vajpayee thought BT (biotechnology) would do for rural India what IT (information technology) did for urban India).