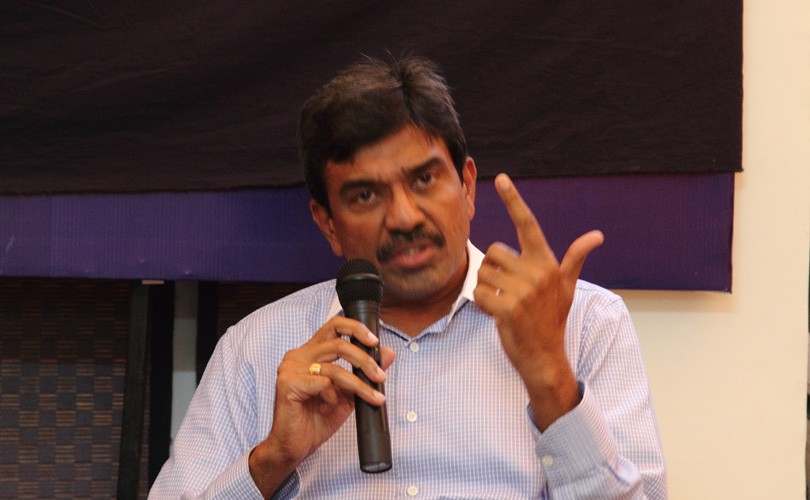 The National Seed Association presses on with its view that while genetically-engineered plant traits can be patented, those rights granted under the Indian Patent Act get extinguished when the trait become part of a plant, and should instead be compensated under the law meant to protect plant varieties. Vivian Fernandes reports.

‘The monopoly which got established in Bt cottonseed has disturbed the industry,’ and to avoid a repeat in other crops, agri-biotechnology traits should not be patented under the Indian Patent Act but under the Protection of Plant Varieties and Farmers’ Right Act (PPVFRA), says Prabhakar Rao, President of the National Seed Association of India (NSAI). He wanted the government to issue a clarifying notification.

NSAI presser on fees and licensing of GM traits. Pawan Kumar Kansal, CMD of Kohinor Seed Fields is second from the left. Prabhakar Rao is on the extreme right. Photo by Vivian Fernandes.

Addressing a press conference in New Delhi,  after submitting a note to the agriculture ministry on how fees or royalty for genetically-engineered traits should be determined, Rao said ‘none of us has a right to ask anybody to give a trait free.’  The developer should not only recover the investment but also get a ‘reasonable rate of return.’  But the fee cannot be determined by the trait developer, he said, as they would charge high. Instead, it should be fixed by a regulator, in this case the authority administering the PPVFR Act.

Rao gave the analogy of privately-developed highways and airports, where payback in the form of tolls or user fees is fixed by the National Highways Authority of India or the Airports Economic Regulatory Authority, as the case may be.

In a note to R K Singh, the Joint Secretary (Seeds), NSAI has acknowledged that under Indian law genes can be patented if they are chemical substances synthesized in a laboratory. The method of grafting them into cells to cause mutation for desirable traits can also be patented. ‘However, the resultant transgenic plants or seeds that include such patented gene cannot be patented, because the Indian Patent Act does not allow patenting of ‘plants, seeds or parts thereof,’ the note says.  (For an alternate view click here)

Rao’s recommendation to the government is to dispense with the requirement of license to use a patented gene or a patented process for grafting it into plants. Since the PPVFR Act does not provide for licensing, the question of issuing a compulsory license (which the agriculture ministry attempted to do on Bt cottonseed through a notification under the Essential Commodities Act, in May) does not arise.  The PPVFR Act also, in Rao’s view, allows breeders or seed companies like his (Nuziveedu) to use patented traits without permission of the developer.  Hence the requirement of no objection certificate (NOC) from the developer should be dispensed with.  Because of NOC requirement, an industry-disturbing monopoly has been created in Bt cotton, Rao asserted.

If licensing is dispensed with and patented traits can be freely used, why would anyone invest in genetic engineering technologies? Rao said the developer is not being asked to practice charity. They can make a claim on the National Gene Fund created with contributions from sellers of seeds with the protected trait and the PPVFR Authority should decide how they should be compensated from the fund.

If the government had erred in giving Mahyco Monsanto Biotech the patent for the two-gene Bt technology post the 2005 amendment of the Indian Patent Act (which, not so incidentally, allows patenting of microorganisms and by extension genetically-modified ones), why is NSAI not challenging the action in the law courts instead of agitating it before the public? Rao said while the legal option was available, there was also a provision for the government to clarify the laws.

Such a clarification, if it were to be issued, might help NSAI and Nuziveedu Seeds in their legal battles with Monsanto and its associates.  But it will also bring into the open differences within the government. The Arvind Subramanian report on pulses has cautioned the government against ‘de jure or de facto expropriation of property rights.’ But Rao and the NSAI can argue that rights are not being expropriated; the interests of various stakeholders are merely being balanced.