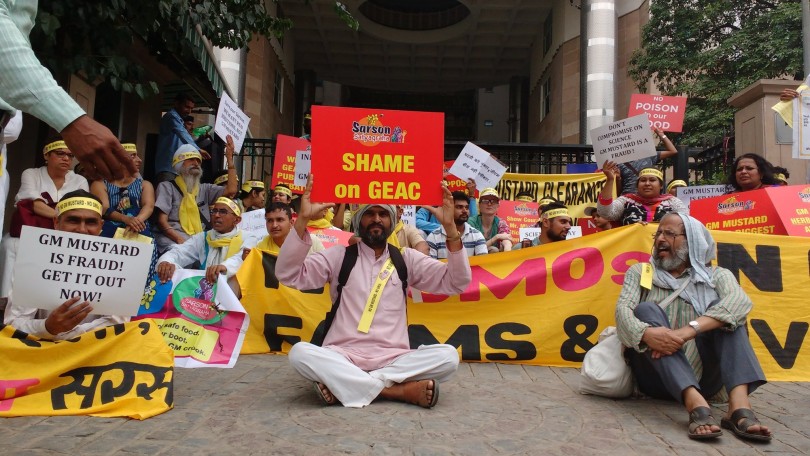 Ever since the Genetic Engineering Appraisal Committee (GEAC) recommended on 11 May, the release of the genetically-modified (GM) mustard hybrid DMH-11 for cultivation by farmers, those opposing GM crop technology are quaking in anger. Though oil and oilcake derived from the seeds of Bt cotton, genetically modified for resistance to bollworms, are widely consumed in India it is primarily regarded as a fibre crop. If the environment minister Harsh Vardhan accepts the GEAC’s advice, GM mustard would be first food crop to be permitted for cultivation in India and the second GM crop to be approved after Bt cotton in 2002. The anti-activists fear it will unclog the pipeline for other releases.

So they are throwing everything into the battle.

On Monday 15 May, Kavita Kuruganti, a relentless fighter, made a Facebook appeal to, “Act Now, Call PMO to Save Our Food, Farms & Farmers.” The office numbers of the private, principal and additional secretaries to the Prime Minister were appended for callers to register their opposition. There was urgency to the appeal because, “There is reliable information that the MOEFCC would approve GM mustard for commercial cultivation today.”

Devinder Sharma, another anti-GM activist has tweeted that GEAC’s approval is based on a “Farrago of Distortions, Mispresentations,” borrowing the phrase from Congress MP Shashi Tharoor, who used it recently to denounce a TV anchor.

Ashwani Mahajan, National Co-convenor of the RSS-affiliate, Swadeshi Jagran Manch, which had organized a seminar against GM mustard in Delhi last September, has tweeted that GM mustard will destroy India’s bio-diversity, cause contamination and  increase dependence on patented products without any productivity gains.

Among the supporters, the South Asia Biotechnology Centre has asked Indian scientists to write to the environment minister expressing support. Bharat Char, Technology Lead at Maharashtra Hybrid Seeds Company (Mahyco), the company that licenses Bt cotton traits through a joint venture with Monsanto, and the developer of Bt brinjal, has tweeted that GM mustard is an option to increase productivity; activists must open their minds and let farmers decide.

The GEAC met eight times on GM mustard since the application was submitted in September 2015. A 3,285 page bio-safety dossier was also appended. This dossier was summarised into 130 pages and placed on the environment ministry’s website for a month last September.  Of a little over 700 comments received, 400 were found to be of some scientific value. A sub-committee of the GEAC studied the dossier and examined the comments. In its report, it said that GM mustard passed the test for toxicity. It does not give rise to new allergies. Though the “bar” gene has been inserted for herbicide tolerance, spraying of herbicide is not recommended. It is not harmful to honeybees and pollinators because it is similar to conventional mustard.  ( R K Thakur, the National Coordinator for Research on Honeybees said GM mustard would be monitored for impact on pollinators once it is allowed for cultivation).

GEAC Chairperson Amita Prasad said 21 of 26 members were present when the decision was taken. The recommendation is initially for four years with a condition for post-release monitoring.

“No government will put its people to risk,” Prasad told this correspondent,

But GM mustard uses barnase-barstar genes obtained from soil bacteria for hybrid vigour.  Mustard is largely self-pollinating. To create hybrids, one of the parents has to be made male sterile so that it can accept the pollen of another parent, after which fertility has to be restored so that the seeds are not sterile. This is done with the help of the two transgenes. The herbicide tolerant, “bar” gene has been added to distinguish GM mustard plants from those that are not (the latter will die when spayed with the herbicide glufosinate).

There is another, cytoplasmic male sterility, method but it is less efficient and more time consuming. Rasi Seeds is offering a mustard hybrid based on this method for planting during the coming winter or rabi season.

“Barnase-barstar system enables perfect hybrid development,” said K V Prabhu, Joint Director (Research) at Delhi’s Indian Agricultural Research Institute (IARI).  Prabhu is an accomplished plant breeder. He has been associated with the development of 23 varieties of rice, wheat, mustard and barley, including popular ones like Pusa Basmati 1121 and 1509 and the wheat variety, HD 3086. In an interview, Prabhu said DMH-11’s “safety issues have been perfectly taken care of.”

Prabhu was not overly concerned about the yield of DMH-11. Even if it was not as high as claimed, better parental lines can be crossed for superior yield. That can happen once the transgenic method of creating mustard hybrids is approved.

Rather than blocking the technology, the anti-GM activists must let DMH-11 prove itself in the fields of farmers. They are the best judges. They may be fooled once, but not repeatedly.

There is broad support for GM mustard which has been developed by a team of Delhi University scientists, led by its former vice-chancellor, the geneticist Deepak Pental. NITI Aayog has said GM crops are necessary to feed and clothe a growing population and cope with climate change. The 2016 Economic Survey said GM technology has “significant net benefits.” The Prime Minister’s office has taken a keen interest, which is why the anti-activists are targeting it. The Prime Minister has not been vocal but he discreetly said the technology is necessary while laying the foundation stone for IARI in Hazaribagh in June 2015. At least seven English newspapers published from Delhi have supported GM mustard in their editorials.

Though Anil Dave, the environment minister who passed away on 18 May, made ambiguous statements, he had told the Lok Sabha last November that, “All public health related issues have been adequately addressed for GM mustard, through the regulatory pipeline process as per the rules.” When activists sought a stay on the release of GM mustard from the Supreme Court, the environment ministry filed a strong affidavit. It asked the court to dismiss the activists’ petition with “exemplary costs”.  They were “strongly motivated ideologically” it said and wanted to “derail and hijack” the regulatory process.

The Supreme Court has stayed commercial release of GM mustard till October. Once the government gives it approval, it will have to obtain the court’s permission, which it might not decline  as the decision to release GM mustard is the executive’s prerogative.

The fear of the anti-activists is well-founded. If GM mustard is approved for cultivation, other GM crops will follow. IARI is using GM technology for 13 priority crops. “For brown plant hopper and yellow stem borer in paddy; spot blotch in wheat; and pod borer in chick pea (chana) and pigeon pea (tur), we have no option but to look for this,” Prabhu said. “In brinjal, for fruit and stem borer we have no resistance in any of the native evolved materials available in the country,” he added.

(Top photo: Anti-GM protesters at Paryavaran Bhavan, the headquarters of the environment ministry in New Delhi).

(This report was first published in thequint.com).