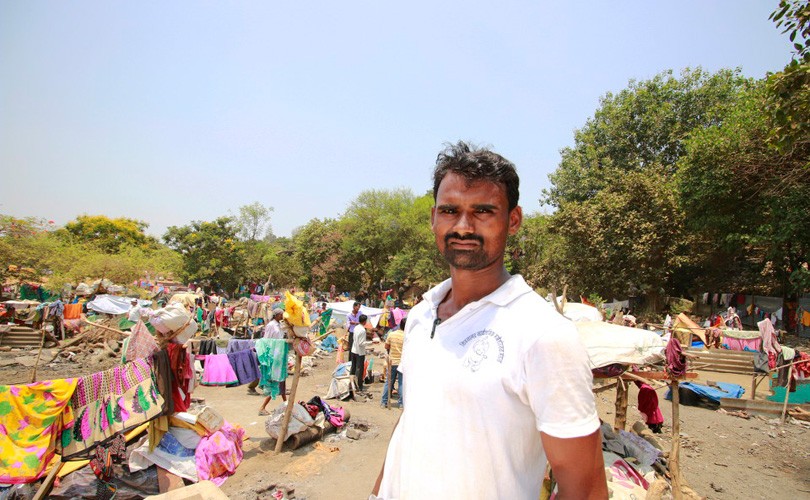 Abhishek Waghmare of Indiaspend.org/Factchecker.in narrates the story of a Latur resident, who has migrated to Mumbai because of the drought in Marathwada. Despite a three-fold increase in daily earnings, the migrant yearns to return to his village. At www.smartindianagriculture.in, we believe that migration to urban areas can be good, but it should not be by volition, not forced. Shreya Mittal and Sukanya Bhattacharya, economics graduates from Symbiosis School of Economics have contributed to this story.

Clad in denim, white tee shirt and possessed of the self-confidence of a Mumbai collegian, Babban Chavan, 25, looked distinctly out of place in the ragged tarpaulin-and-bamboo migrant camp that houses drought refugees in the teeming central suburb of Ghatkopar.

A farmhand and owner of 10 goats and two cows, Chavan started working from age 15 in itinerant jobs as a farm labourer, moving from an unskilled bigari construction worker to mistry, a skilled construction worker, before two successive years of drought, forced him to leave his wife, four children and ailing parents and travel 550 km northeast to Mumbai.

Travelling by train alone as he had a permanent reservation in trains due to a leg handicap, his family traveled by private buses. He journeyed this January from his village, Kaulkhed, in Udgir taluk in the southeastern district of Latur in the heart of drought-hit Marathwada.

At their temporary home in Ghatkopar, their income from mostly construction jobs has taken them from below the rural poverty line to 82% above the urban poverty line.

‘Since we stay just 5 km from Udgir city, the children were getting water to drink through tankers coming from the municipal area,’ Chavan told IndiaSpend. ‘The water wasn’t enough for my cattle, and I could not see them die in front of me. So I let them drink our share of water, and came here to earn.’

A 5th-class pass, Chavan is young, strong and driven. He wanted to rebuild his home and be at home for the entire year. He wanted to move up from being a mistry to a supervisor at a construction site. He wanted his children to be graduates and to find a job in a city.

‘Amchi paristhiti poranvar nay yeu denar.’ (I do not want my children go through conditions I am going through), he said.

In Mumbai, Chavan earns up to Rs 900 every day as a skilled construction labourer. ‘I probably earn more than anyone else a day here, more than the unskilled workers who here form a majority, and three times the Rs 300 I earned in Udgir,’ he said.

Chavan and family are among the thousands of migrants who land in Mumbai and other cities every year, their numbers exacerbated this year by the record drought in Marathwada.

When we met him, Chavan longed for home. He wanted to meet his parents and play with his sons. He believed he had earned about Rs 45,000 from his four-month Mumbai endeavor, three times the Rs 15,000 he earned during his four months as a farm labourer in the last monsoon crop season.

(IndiaSpend is a data-journalism initiative and member of the Global Investigative Journalism Network. FactChecker.in is a fact-checking initiative, scrutinizing for veracity and context statements made by individuals and organisations in public life.