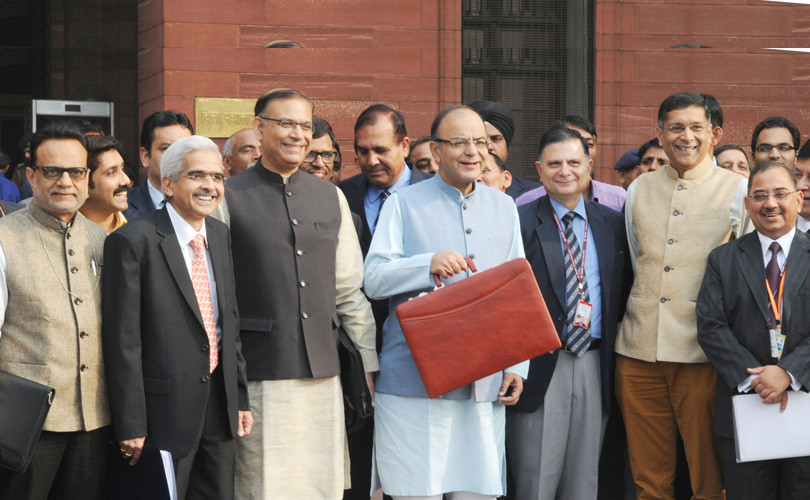 Stung by criticism that it had neglected agriculture, the government has made amends in the Budget. Bu the emphasis on organic farming to double the income of farmers in rain-fed areas reflects confusion, reports Vivian Fernandes.

Finance Minister Arun Jaitley has paid lavish attention to agriculture in his budget. Total outlay for the agricultural sector, including central assistance to state plans, has more than doubled to Rs 36,000 cr from nearly Rs 16,000 cr in the revised estimates for this year.  Much of the increased funding will come from outside the budget, say through bonds of Nabard, the national agricultural bank.  The outlays for schemes that bear the ‘pradhan mantri’ tag – crop insurance and irrigation; the budget for research and extension; and the subsidy on crop loan interest have all been increased. (The budget allocation for agriculture is not as big as we initially thought.  The interest subsidy on crop loans, which was posted under the Department of Financial Services in 2015-16, has been shifted to the agriculture ministry in 2016-17. So the agricultural budget for the coming year is just 25 percent higher.  The headline has been changed to reflect this. This update was made on 6 March, 2016).

In the past two years, average annual agricultural growth has been less than one half of one percent and there was an expectation that the neglect of agriculture by a government focussed on ‘Make in India’ would be reversed. The emphasis on manufacturing is correct. It can create more productive and better paying jobs. But agriculture should also be profitable. The finance minister has hit the right notes. Assuring ‘income security’ to farmers is a surer way of ensuring food security.

The new crop insurance scheme with increased risk cover at a low premium announced earlier this year will help protect farmers’ incomes. It gets Rs 5,500 cr in the budget, up from nearly Rs 3,000 cr which the various insurance schemes it subsumed got in the revised estimates for this year. That is a substantial increase.

The Pradhan Mantri Sinchai (irrigation) Yojana, gets 50 percent more from Rs 1,550 cr to Rs 2,340 cr.  It is a bouquet of four previous schemes. The finance minister said 89 projects were ‘languishing’ of which 23 will be taken up in for completion by March next year.  A long-term irrigation investment fund of Rs 20,000 cr has been announced, with Rs 12, 500 being provided in the budget, with Nabard issuing bonds. It is not clear how much of the Economic Survey’s thrust on micro-irrigation to get more crop per drop is reflected in the budget. On Budget day, Investors drove up the stock of Jain Irrigation, a pioneer in drip irrigation, by seven percent but it lost all the gains and ended the day nearly three percent lower than the previous day’s close, echoing the sentiment in the wider market (which also fell due to global cues).

The government’s emphasis on organic farming ‘to increase crop yields in rain-fed areas’ is rather curious, unless it wishes to deploy genetically-modified seeds, which have inbuilt insect resistance and are low on pesticide usage. But that is being optimistic, as the ruling party’s faith in bovine dung is touching. Increasing yields through organic farming which shuns chemical inputs is a leap of faith.  Organic farming is low in productivity; farmers can make up through premium prices provided the produce is well marketed and they get to keep a chunk of the retail value.  Given the physical and marketing infrastructure in rain-fed areas, that is a  stretch. In Sikkim, which the Prime Minister declared wholly organic in February, a report in Mint newspaper said local buyers could not afford the produce. The stuff which goes to Siliguri, a neighbouring city in West Bengal,  gets mixed up with non-organic produce and fetches low prices.

The government’s goal  of doubling farmers’ incomes in five years is similar to the objective which Gujarat’s tribal affairs ministry had for the Van Bandhu Kalyan Yojana (tribal welfare programme) when Narendra Modi was chief minister. The Gujarat programme aimed to achieve it by moving farmers from low-yield, low-income agriculture to high-yield (and input), higher income agriculture by giving hybrid maize seeds, subsidized chemical fertilizer and agronomic advice through non-governmental organisations. Trying to double farmers’ income by bringing five lakh ha under organic farming in rain-fed areas, may not achieve the purpose. Tradition has a calming influence on the mind; it will not levitate farm incomes. (Former finance minister P Chidamabaram has done the math in the Sunday Express of 6 March. The goal of doubling farmers’ income in five years will be difficult to achieve, he says, because it will have to grow by 12 percent a year).

The rural employment programme, MGNREGS, will get Rs 38,500 cr, or about Rs 2,700 cr more. There is an emphasis on drought-proofing through farm ponds and dug wells.  This is being done in Marathwada, but a university vice-chancellor said farmers were building the ponds at elevations into which they were pumping water from wells, so they could irrigate fields with force of gravity when power failed.  This does not help rainwater conservation for which the wells must be in depressions so they can arrest ad collect the run-off. Emphasis on implementation of the scheme in Bundelkhand is needed. This region straddling Uttar Pradesh and Madhya Pradesh, has seen two droughts in a row. The finance minister expects multi-lateral agencies like the World Bank to lend Rs 6,000 cr at low interest for this asset creation project.

The prime minister’s rural roads scheme gets Rs 2,600 cr more. FDI in retailing of processed foods has been allowed. (This is not such a radical relaxatio. The Manmohan Singh government had allowed FDI in multi-brand retailing, but no investor has plucked the courage to invest because the ruling party is ideologically opposed, though it had not repealed the law). The budget says more than 500 wholesale regulated mandis will be able to jump on to the e-marketing platform provided their states reform the agricultural marketing law which was notified more than a decade ago.  Mandi commission agents are a powerful lobby and they have stalled progress. Most of them are the ruling party’s supporters.

The central plan outlay for agricultural research and education gets Rs 800 cr more but as the Economic Survey says the productivity of two-thirds of public sector research scientists is   low to very low. Unless they are made to sweat harder, this money will not translate into better outcomes.

The increased allocation to promote pulses production,and the price stabilization fund,  is welcome.  The pilot project to transfer fertiliser subsidy directly into accounts is a good move but will require changes in leasing law (currently being drafted by NITI Aayog) for the benefits to reach cultivators and not non-cultivating land owners. Will the subsidy be given before the sowing season? If not, can cash-strapped farmers pay full market prices first?

The budget has good ideas. What they need is great execution capability.  Nandan Nilekani’s Aadhar project faced hurdles from cabinet colleagues like P Chidambaram in the Manmohan Singh cabinet, and activists outside. But the NDA government has decided to back it up with a law. That’s proof of its worth. A committee of wise men headed by IT software industry lobby, Nassom’s former head Kiran Karnik, cleared up the mess at Satyam Computer after it was defrauded by its founder.  The government must bring such persons of proven organisational capability to implement its marquee projects. That is a sure-shot way of translating outlays into outcomes.