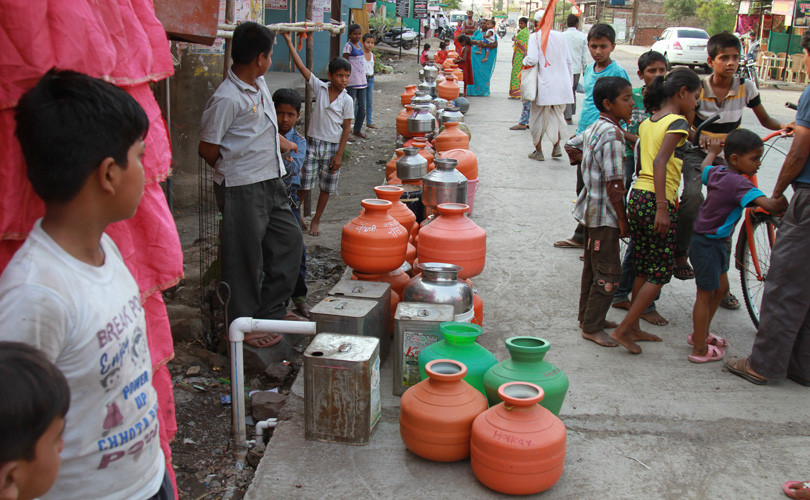 Media attention has forced the government into arranging water by train to Latur city in Marathwada. The administration should have taken action well in advance as Marathwada was declared drought-affected last October, reports Vivian Fernandes.

One realizes in Latur that drought is not an equalizer; it has a class bias. Poor people suffer the most because they cannot afford to buy water even in the frugal quantities they need. The quest is made painful by an administration that does not seem to have the wits to rouse people into cooperative behaviour or impose sensible curbs on wasteful use, in time.

At the city’s Vivekananda Chowk there was a long queue at a municipal tap when visited on Saturday 15 April. Life Insurance Corporation agent Gaikwad Shivdas Kerba said he had placed his pots and cans at 10 in the morning. At 6 pm, he said, he was about two hours away from his turn. His wife had relieved him in between and their three children also pitch in. Mangal Sonwane, who works in the city’s wholesale mandi had filled two pots after a ten-hour wait. Her sister, Manisha Bharat Tenkale, a construction worker, expected her turn to come at 11 p.m after a nine hour vigil.

At Aravi village, near Latur railway station, there was another queue at the panchayat’s water tap. Raju Rajput, a grocer said one would lose one’s place if not physically present. Spots are marked just past midnight. Arvind Vithal Sabne, a class 10 student, said his family was first off the mark, because it lives just across the tap, on Sai Road.  Sheikh Hakani, who has a rented pan shop near the tap, says he buys 18 litres of bottled water for Rs 40. The panchayat provides him 200 litres by tanker.

The well next to Latur railway station into which rail tanker water is being emptied. Photo by Vivian Fernandes.

Is it necessary for routines to be disrupted, workdays to be abridged and wages to be lost? Isn’t there a more efficient way to cope with the crisis? A caring administration would have deployed volunteers or workers on contract to monitor the queues, even if it could not bring water to doorsteps.

A railway driver from the adjoining district of Beed said Latur was getting attention because of the media. In the same vein a government contractor said Latur was witnessing a Peepli Live moment, that is, television channels were exaggerating the crisis to gain viewers. There were pockets in Marathwada, he said, which were more parched.  But a tour across four of eight districts of the region showed that Latur was indeed badly affected. Statistically speaking Parbhani district got the least rainfall last monsoon season. Its deficit was 54 percent. Beed’s was 50 percent below normal. In Latur’s case the shortfall was 51 percent. But then at 3.82 lakh, Latur city has a higher urban population that the other two towns.

The media attention has done Latur good. Water is being brought from Miraj, 342 km away by train. The water is being emptied into a private well, next to the station. A three-km long ductile-iron pipe to the municipal filtration unit was being laid at a cost of Rs 3 cr. Contractor GG Makne said his team was working over time. Once the link was established, the number of wagons would increase from 10 to 50, each carrying 50,000 litres. At 200 litres per household it should meet the requirements of 62,500 people or a sixth of the population. That will ease the situation considerably. The last time a train was pressed into service for providing drinking water was in Rajkot, Gujarat in the 1980s. Makne said the pipeline from the railway station should help Latur cope with acute droughts in future.

While Latur cannot be grudged the attention it gets, the administration should have imposed curbs on wasteful water use well in time because the signals had flashed during the last monsoon season. Marathwada was indeed declared drought-affected in October. But it was only in April, that the government banned drilling of bore wells deeper that 200 feet. A five-year moratorium on new sugar mills was also imposed.

In the villages, panchayats have been empowered to commandeer drinking water resources. Sudam Namdeo Kamble, 65, the sarpanch of Vaitagwadi panchayat in Parbhani taluka, said he had taken over a private well at a monthly rental of Rs 12,000 since January. The money is reimbursed by the state government.

In some places the shortage of water has awakened latent caste conflicts. Indubai Kamble of Bagh Pimpalagaon village in Beed taluka lost her ten-year old granddaughter, Rajeshwari, in February when she fell into a well with little or no water. Indubai is a dalit Christian. She says the Other Backward Caste Dangars and Mahrattas would release water to them infrequently. Rajeshwari’s death was an accident. The dalit well like others in this part of the country

has no parapet.   But it has acquired a caste colour. Sarpanch, Satyabhama Janardhan Chitalkar, showed little sympathy. He said Indubai was lying.

Unlike drought-affected Bundelkhand, Marathwada has ample rain-water harvesting structures. B Venkateswarlu, vice-chancellor of the agricultural university at Parbhani says it has a surfeit of them. But there must be rain to harness in the first place. When a 50 percent deficit in 2014 is followed by a 40 percent shortfall in 2015, there is bound to be distress. Recurring droughts are not new to Marathwada. But earlier, pulses and oilseeds were the main crops. These could cope. Now soybean, sugarcane and horticultural crops are also grown. These require more water. Along with conserving rain water, the people in the region must learn to use water judiciously through tools like drip irrigation. And there should  be proper pricing of water.