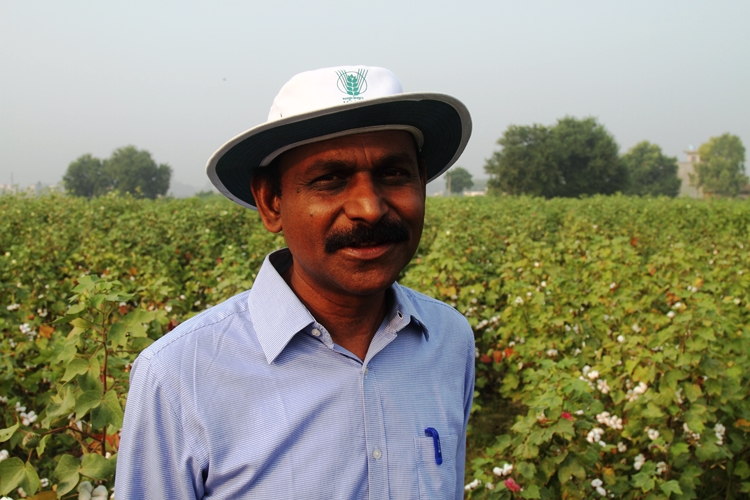 As Keshav Raj Kranthi bids adieu to the Central Institute of Cotton Research, Vivian Fernnades reports on the director who could not digest the eclipse of the public sector in the lives of cotton farmers.

Keshav Raj Kranthi bid farewell to the Central Institute of Cotton Research (CICR) on Wednesday, 15 March, after being its director for nine years. He has taken voluntary retirement to join the International Cotton Advisory Committee in Washington D.C where he will be heading the technical information services division.

“The cotton economy changed dramatically,” during his tenure as head of CICR, Nagpur, Kranthi said over the telephone. Control over the crop shifted from the public sector to the private sector, he said, because of genetically-modified Bt cotton, where private trait and seed companies held sway. This resulted in a “mismatch,” he said, between “commercial considerations and research recommendations.”

Kranthi had a number of issues with Bt cotton. First of all, the genetically-modified trait that was toxic to bollworms could only be implanted in American cotton, which not being native to India, was susceptible to pests and diseases unlike native, Asiatic or desi cottons.

Secondly, to profit from their research investment in insecticidal Bt traits, private companies had to promote hybrids, whose seeds had to be purchased year after year. A part of the price which farmers paid was trait fee. In countries like the United States, the insecticidal trait was available in varieties whose seed farmers could save to sow the next season.  But intellectual property law in the US allows trait developers to charge farmers for such seeds, unlike India.

Hybrids were not suitable for dry lands, which account for most of India’s cotton area, as they require more fertilizer to be applied. Farmers also went in for multiple pickings to defray the cost of seed and inputs. This allowed pests like pink bollworms to infest the crop.  Long duration also increased the crop’s vulnerability to adverse weather conditions.

Kranthi believed that the Bt cotton revolution which began in 2002, was a transient phenomenon. For India’s cotton economy to be sustainable, the crop had to be of short duration and early maturing. This would obviate the need for the seeds to be impregnated with the insecticidal Bt trait.  But to ensure that farmers earned as much from a single picking as they did from multiple pickings of hybrid cotton, they would have to go in for high density planting.

Though the idea seemed good, Kranthi was not able to convince farmers ─ at least not in the numbers that could make a difference. He did involve some NGOs to demonstrate high density planting of short duration native varieties in the Vidarbha region over the past three seasons,  but the number  of farmers involved was too small to be of persuasive value.

As he leaves for Washington DC, his call to Indian farmers “to wake up and help desi cotton get back its lost kingdom, and through it so shall our brethren regain back our roots to reach the sky,” remains a plaintive cry.