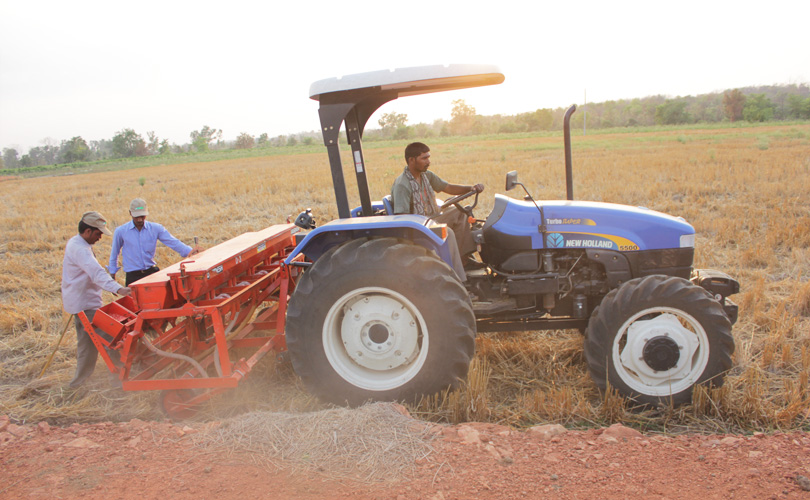 Conservation agriculture is the fastest growing cultivation technology in the Jabalpur area of Madhya Pradesh, says Ajit Ram Sharma, Director of the Directorate of Weed Research, based in this city of ordnance factories and defence establishments. ‘Wherever we have gone (for demonstrations) the response (from farmers) has been beyond our imagination.’ Vivian Fernandes reports after a visit in the second week of May, 2015.

Conservation agriculture is based on three principles. (a) Zero or minimal tillage, as ploughing leads of loss of moisture and destruction of capillaries formed in soil by roots; (b) retention of previous crop trash on the fields to conserve moisture, increase organic carbon content and suppress weed growth; and (c) interruption of the wheat-rice cycle with a leguminous crop, like moong, to enrich the soil with nitrogen. While the performance of individual crops matter, their impact on subsequent crops is also considered. It is the approach of a farmer rather than that of the specialist.

This new method of cultivation is the flagship programme of the directorate. Sharma has been associated with it for long, having worked on a central government project in Dehradun for four years in the late 1990s and as principal investigator for the challenge programme on conservation agriculture at Indian Agricultural Research Institute, Delhi, for twelve years, till his posting to Jabalpur in 2012.

In Kharif 2012, the directorate experimented with conservation agriculture on a three hectare farm. Enthused by the results, it decided to take it to farmers. One of the demo villages was Baiher in Panagar block in Jabalpur district. Farmers gathered in large numbers but most were sceptical. ‘How is agriculture possible without ploughing,’ they wondered. Neither they, nor their elders, had heard of it. A passing fad, they thought.

Sharma offered to compensate them for crop loss, if any. Some volunteered, but once the scientists turned their backs, they ploughed the fields and sowed seeds the normal way.

Among the few who stayed on was Satish Dubey, 45, a farmer of village Bharda in Panagar block. A petrol pump manager, Dubey has been farming fulltime for the one-and-a-half decades; the change of vocation decided by unease with short changing motor fuel customers and the desire to rise up in life though dint of effort. Of the 35 acres he cultivates, he owns 2.5 and leases in the rest

Maize sown in a field in Jabalpur.

‘My elders would say a field should be so well ploughed that a pehelwan should not get hurt when knocked down on it,’ says Dubey. Pehelwans will steer clear of Dubey’s fields. In the last season he did not plough any of them. Jabalpur’s clayey black cotton soil tends to get hard and crack when dry.  But Dubey has no use for earth-churning machinery. The rotavator, which renders soil powdery, he does not even rent out, as it forms an impermeable hard pan at a little depth below the surface. The tractor, he uses as a source of power for attachments like the direct seeder; not to turn up the soil.

Once Dubey gets going on conservation agriculture there is no stopping him. The biggest draw is the saving in initial cost, as the four ploughings that are normally done at about Rs 2,000 an acre before seed is sown, are not necessary. That is about a fifth of the per-acre cost of wheat cultivation.  There is also a saving in seed, as only half the quantity (40 kg, instead of 80 kg) is used with the direct seeder.

For Onkar Prasad Barman, 63, a retired ordnance factory employee of Phutatal village, the saving in water is the charm, as straw on the surface keeps the temperature down by a few degrees in summer, reducing evaporation loss.

Ajay Sharma, 42, of village Baiher has taken an opportunistic crop of moong after rice and wheat because of the time saved. This is the first time he has grown a third crop. He is a large farmer with 50 acres of his own and 450 acres owned by the extended family of brothers and aunts.

But one of his fields is freshly ploughed. Isn’t that a sign that he is not fully convinced?  No, he says. The seeders are not available on hire. The last time, it was loaned to him by the directorate. It is unlikely to spare it for ploughing his entire holding. He had no option but to cultivate the traditional way.

Conservation agriculture goes back to basics, but it is not primitive. ‘It requires machines and use of herbicides,’ says Ajit Ram Sharma. The direct seeders can part trash deftly without raking or piling it. They can sow to required depths. Delicate rice is sown in two cm deep furrows in the light soils of the Gangetic plains. In the heavy soils of central India, it has to be placed by merely scratching the surface. The combine harvester for paddy requires a spreader at the back to evenly distribute straw in the field. Paddy can be harvested and wheat sown at the same time.

‘Based on my experience of the last three years I can say with full confidence that it is best suited for the vertisols or black cotton soils of central India,’ says Sharma. ‘This is spreading like wild fire. Wherever we have demonstrated farmers are convinced and yields in demos are 1.5 to 2 times more than under conventional practices.’

Jabalpur is high rainfall area. Time available for seeding is very less. Rains start by third week of June. Most farmers do sowing only when monsoon showers are received. They get about twenty days to complete it.  Labour is a scarce. And farmers have large holdings. So much of the land remains fallow, both during rabi and kharif.

Conservation agriculture saves time because the sowing is done when fields are dry. Kharif maize and rice are sown in May, a month ahead of the onset of monsoons. If sown late, the low temperatures of September and October do not allow the rice grains to be fully formed.  Wheat is traditionally sown at end of November. But with conservation agriculture it can be advanced by about ten days. That gives the wheat crop enough time to bulk up in winter and fill up the grains.  A third crop, a rarity in these parts, is also possible.

Raj Gupta, who heads the city station of the Borlaug Institute for South Asia (BISA) believes two million hectares of fallow land in Madhya Pradesh can be brought under cultivation with conservation agriculture. BISA advocates it for India and works in close association with the Directorate of Weed Research to popularize the technology.

Excerpts of an interview with Ajit Ram Sharma:

Question:  You say farmers are enthusiastic about the technology. What about the government?
Ajit Ram Sharma: The state agriculture department has decided to give subsidy for purchase of machines. These machines are a new introduction. They are made in Punjab and there are five-six manufacturers. Many farmers have procured these machines and there is a lot of demand.

Q. This kind of agriculture requires herbicides. Isn’t that a put down?
ARS:  In the last ten years or so some high potency low volume molecules have become available.  They are cheaper than conventional de-weeding. Labour is becoming a scarce item all over the country and therefore use of herbicides for weed management is becoming very popular. Herbicides are very effective and unlike insecticides and fungicides do not have much residual effect. This kind of agriculture is not only machinery driven but also herbicide driven.

Q. You mentioned two chemicals in our conversation earlier: Paraquat and Glyphosate. Are you not aware of the campaign against Glyphosate?
ARS:  Glyphosate is a wonder herbicide and without use of this herbicide this agriculture cannot be practiced. It is a non-selective herbicide. We recommend applying it before sowing because weeds  in the soil need to be killed. Glyphosate and Paraquat are the only two that are available.