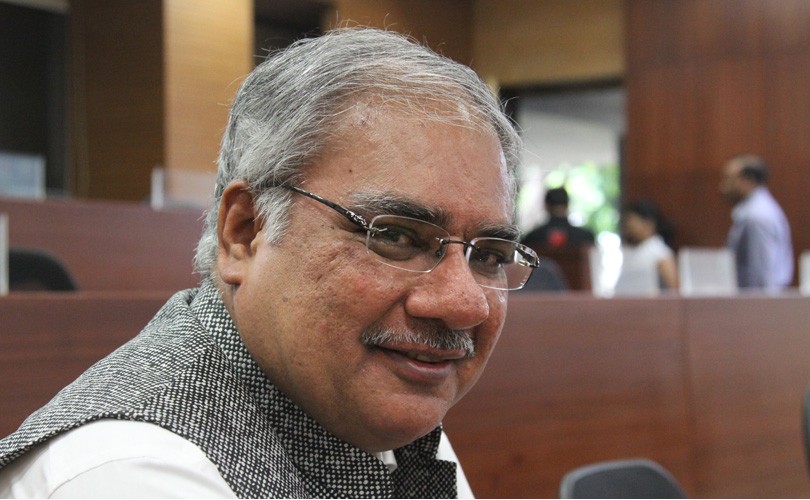 Rear-view mirror farming cannot double farmers’s income in seven years, says Surampudi Sivakumar of ITC. Vivian Fernandes brings you a report based on his presentation at a seminar on the Indian economy organized by Swarajya magazine and the Public Policy Group of the Indian Institute of Management, Bengaluru, on 31 July, 2016. (Kindly add 1,000 to the page views. Our meter resets after 999! – editor).

The government’s target of doubling inflated-adjusted farmers’ incomes by 2022 will not happen unless there is a coherent strategy, and the private sector is involved in transforming agriculture from being part of the production-driven supply chain to a demand-driven value chain, says Surampudi Sivakumar, group head for agri and IT businesses at ITC.

Agricultural household incomes vary with crops: coarse cereals and pulses in rain-fed areas yield the least income while fruits, vegetables and sugarcane yield the most.

Incomes also depend on farm size. Those holdings less than one hectare earned between Rs 4,561 and Rs 5,247 and most of them were in debt because their monthly consumption expenditure was in the range of Rs 5,108 to Rs 6,020.

There are constraints to raising agricultural incomes. Costs are rising. The survey just cited says labour constitutes an estimated 21 percent of the monthly expenditure on crop production of cultivating households next only to that of fertilizers and manure (24 percent).  This is not to be lamented as agricultural workers must also get their fair share.

Consumers will not tolerate high prices so there is a limit to raising minimum support prices. Weather seems to be getting erratic. There were two consecutive years of deficient rainfall before this year. Even when a season gets normal rainfall, distribution may be uneven both geographically and time-wise. A few downpours may be followed by long dry spells which crops may be unable to cope with. India will also remain smallholder farm country. This need not hold agriculture down. China has shown that small farms can be efficient.  Nearly 58 percent of rural households (156.14 million) are agricultural and get 48 percent of their monthly income from cultivation and 12 percent from animal farming.  Jobs are not being created fast enough to absorb the addition to the rural workforce and reduce the stock of it.

But there are opportunities. Diets are getting diversified away from cereals. While consumption of unhealthy fats and sweets has increased, people are also taking more eggs, milk, meat, fish, fruits and vegetables. Consumers want convenience. Some are also particular about safety; they are worried about pesticide residues. Technology is making agriculture industrial in nature. With data obtained from sensors and satellites it is possible to apply precise quantities of fertilizers, pesticides and water according to plant need. Smart phones and mobile internet can help large buyers, whether they are processors or traders, to aggregate smallholder farmers with apps like Uber does with taxis.

Yet for all these advantages, farming in India is like driving with only the rear-view mirror. Farmers plant with last season’s prices in mind while those in the advanced countries are guided by prices that are likely to prevail at harvest time. Contract farming, where processors or large traders, enter into contracts at the time of sowing to buy harvested produce at fixed rates can take care of the price risk. There is a possibility that farmers will renege on their commitments if prices rise.  Buyers like ITC have options embedded forward contracts where sellers are assured the contracted price in any case but also get a higher rate if prices rise.

Futures contracts can help farmers. These are exchange traded standardized contracts expiring every month where the quantity, quality and delivery point is fixed but prices are discovered minute by minute. The trouble in India is that small farmers cannot afford them.  A lot size of a futures contract in potatoes may be 10 tonnes while farmers might want to sell just two tonnes. Aggregators can pool these small contracts but they are not recognized as intermediaries in India.  Derivatives or options in commodities were permitted but are banned now; they have been blamed for stoking inflation.  Options trading had become highly speculative with prices bearing little resemblance to realty but the solution is to mitigate risks and improve regulatory oversight not an outright ban.

Farmers do have access to prices in the commodity exchanges. But that information does no help if they cannot access buyers at that price. In April, the government launched the electronic National Agricultural Market. But it only transports the regulated mandis to the online platform.  Farmers now have more of the same set of buyers (arhatiyas or commission agents) to sell to not a variety of buyers. They still have to take their produce to the mandis where they will be obliged to sell at prices and terms the arhatiyas offer as they will have to incur the cost of transportation if they do not. In the mandis, the commission agents and the mandi administrators are the same set of people; they protect the interests of their own rather than those of farmers.

ITC’s e-Choupals offer an alternative. These are hubs with warehouses, farm equipment repair centres, soil testing facilities and shops selling groceries and farm inputs. Through these hubs ITC, a  cigarettes and consumer goods company with brands like Aashirvad atta, Sunfeast biscuits and Bingo potato chips, buys 19 commodities in 220 districts across 21 states.  Farmers can take samples of their produce to the hub, or ask the Choupal ‘sanchalaks’ to take samples and if these pass the test, can sell at the offered price. Or they can canvass for better prices from other traders in the village.

Such alternatives are truly empowering. But laws are not helpful. In Rajasthan, private mandis have to be at least 15 km away from regulated ones. In Karnataka, the minimum distance used to be 25 km but the law is liberal now. Some states do not allow sales outside regulated mandis. Others have other restrictions.

The government attitude to curbing inflation also hurts farmers. It sees the task in policing terms. So restrictions have been imposed on the quantity that can be stored. These limits vary with commodities, the season and the purpose of storage (whether for processing or trading) .  Governments also act whimsically banning exports or imposing minimum export prices (for potatoes now).  For these reasons ITC has stopped at four million farmers when it could have cast the net wider with gains for both itself and farmers.

Seed technology is vital to raising farmers’ incomes as India experience with genetically-modified Bt cotton demonstrates.The way to increase farm incomes without raising prices is to improve productivity. That way consumers pay a low rate per unit while farmers earn more per acre.  But recent initiatives of the agriculture ministry have unnerved innovators. Why should they invest in research and development whose payoff may come 15 or 20  years later if they cannot recoup the investment and profit from it? Late last year the agriculture ministry brought Bt cottonseed under price control nationally. In May it invoked the Essential Commodities Act to divest Bt cottonseed technology patent holders of their rights in a barely concealed effort to benefit Indian franchisees.  Such moves do not help farmers who need seed technologies that are climate resilient or can confer inbuilt protection against pests and diseases.

‘Rely on science not politics,’says Sivakumar for policies governing plant patents. He also believes India’s agricultural extension system is s-o-o yesterday. It was meant for the Green Revolution when the government  tried to increase production by providing farmers in north-west India with irrigation and high-yielding wheat seeds and assured them guaranteed purchases of their produce.  But consumer needs have become differentiated now. To grow for such a market farmers need agronomic advice. But they are unwilling to pay for it because the government sets the benchmark by providing extension services, albeit of indifferent quality, free to farmers. Instead, it could create a market for agronomic advisers by getting farmers to pay for their services and picking up part of the tab.

The government’s intentions are laudable. But a coherent strategy of translating them into outcomes seems to be missing.