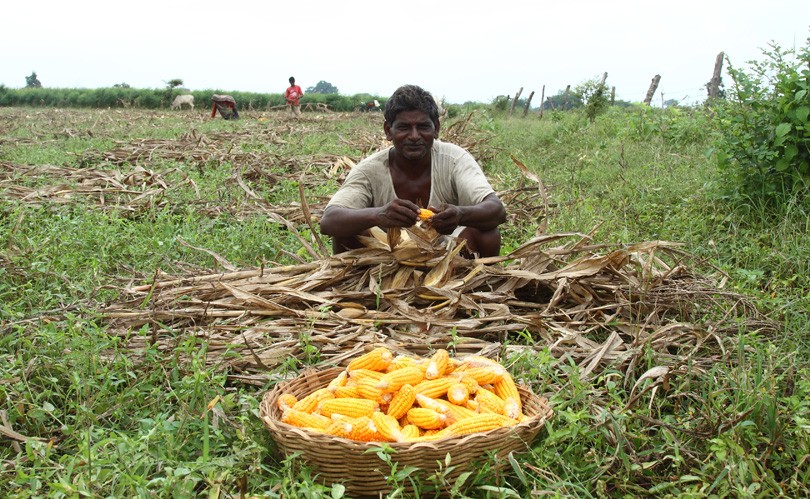 Those working among tribal farmers in Dewas district of Madhya Pradesh think the Green Revolution model is not suitable while a Gujarat government programme is based on it, reports Vivian Fernandes.

The do-gooders from Jawarharlal Nehru University and  Delhi University who three decades ago gave up careers in academics for tribal uplift in Bagli tehsil of Madhya Pradesh’s Dewas district discourage  the use of cash in farming operations. Not that they have an aversion to it like the current resident of 7 Lok Kalyan Marg, as Delhi’s Race Course Road is called. But paying for inputs like fertiliser and pesticides is like a wealth transfer operation. A loan for fertiliser has to be repaid 1.5 times over at harvest time, or in four months. It is called dhediya. The rate for pesticide credit is sawa or 1.25 times. Seeds are not bought but exchanged. Every quintal has to be repaid duguna or twice over. The value of grain that is given in exchange will be less than the price of seed, but it would be about 60 percent over the value borrowed.

The students who set up Samaj Pragati Sahayog, an NGO in 1990, were inspired by Muralidhar Devidas “Baba” Amte, to encourage tribal farmers to practice low-input, self-reliant and sustainable agriculture.  Not for them the Green Revolution’s emphasis on productivity. They frown on hybrid seeds which cannot be saved and sown the next season (that would cause loss of hybrid vigour).  The seeds have to be bought year after year. They have to be nourished with chemical nutrients (and farmyard manure) to deliver on their potential. In Dewas, it rains only during one season and rainy days of 2.5 mm and more are few and far between. Small and marginal farmers would be better off by focussing on incomes and livelihoods. So save-and-sow seeds which have adapted to local soil and weather conditions over many generations are preferred. The skills of public sector soybean researchers in Indore and maize scientists at Indian Agricultural Research Institute, Delhi are also tapped. The thinking in these parts is that high productivity should properly be the concern of farmers in irrigated and fertile river plains.

A singular focus on productivity is also seen as ecologically unsustainable. It leads to extractive agriculture, where tomorrow’s store is raided for today’s gratification. Farmers are encouraged to produce their own manure with vegetable shavings, crop waste and animal droppings, enhanced with bacterial cultures, though these cannot match the nutrients which fertilizers can provide. Chemical pesticides are taboo. Even those touted as benign are considered harmful to beneficial insects and microbes. Non-pesticide management (NPM) is an article of faith. There is a strict protocol for NPM farmers. They have to pass audits too. There are 3,200 farmers who have qualified. Their produce is marketed by a company set up by one of the pioneers under the brand, “Safe Harvest.”  Organic insect repellents and killers based on neem oil and the extracts of poisonous weeds are preferred.  Curiously, crops genetically engineered to be toxic to certain insects, and therefore low on pesticide use, are shunned.

The Samaj Pragati Sahayog team. P S Vijayshankar, one of the founders is third from the right, wearing beige trousers. Photo by Vivian Fernandes.

Is this actually Leftism (with this disdain for private enterprise and western technology, because it could enable corporate control of agriculture), dressed up as environmentalism? And does not the elevation of native wisdom bring them closer to conservatives glorifying tradition?

“We do not agree that there is a single, uniform mode of science,” says the young CEO from the Indian Institute of Rural Management, Anand, who is four-months into the job.  “We are not romanticising tradition,” he asserts.

The practices that SPS advocates are based on experience. Though P S Vijayshankar, one of the founders,  lists markets as a “threat,” the NGO has done pioneering work with the erstwhile Forwards Markets Commission and capital markets regulator SEBI (which also regulates commodity exchanges) to enable farmers’ organizations to use forwards (now disallowed) and futures contracts to manage price risk.  It has made profits in some years and losses in others. By promoting self-help groups of women and linking them to banks for finance, it has taken the sting out of indebtedness (though most of its farmers are in debt).

The SPS model of raising tribal incomes differs from that of Gujarat Van Bandhu Kalyan Yojana, launched in 2007 as a private-public partnership to double tribal incomes within five years. There then secretary Anand Mohan Tiwari, who initiated the programme and stayed with it for the first six years, wanted to extend the benefits of Green Revolution to tribal pockets. The emphasis was on high-input, high-output agriculture.  White desi maize (low in beta carotene and hence Vitamin A) was replaced with less palatable yellow hybrid maize for sale as feed and feedstock (for alcohol and industrial starch).  Farmers were supposed to become part of the cash economy. They were expected to produce for the market, and buy their food (white maize, if they so wished).  Farmers were hand-held by NGOs, some of them overseen by industrialist wives, who were expected to be altruistic and not self-aggrandizing.  Hybrid maize seeds were bought through auctions, including from multinationals, and supplied, along with fertilizer to tribal farmers are subsidized rates, which would taper off over time. All the details were put on a website to ensure transparency. It worked well so long as there was an earnest and problem-solving official at the helm.

There can be no single model for a diverse country like India. But clusters which provide agronomic, financial and marketing support, for mutual profit or altruistic reasons, do help improve smallholder farmers’ incomes over a length of time.