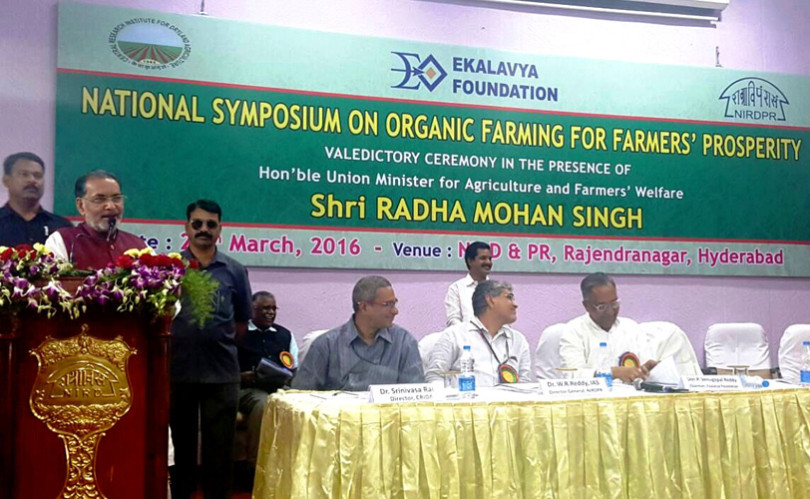 An ICAR institute dedicated to research in farming systems advices organic farming to make Indian agriculture sustainable by improving soil health. Done scientifically, it is not a return to pre-Green Revolution practices, reports Vivian Fernandes. This piece was first published as a column in the Financial Express (link below)

Since the government is engaged in a nationalist versus multinational battle on genetically-modified Bt cottonseed, and Agriculture Minister Radha Mohan Singh has weighed in on yogic farming, that is, boosting seed productivity and soil fertility through Raj Yoga, the focus on organic farming in the Budget might be perceived as yet another throwback to practices of a supposedly gilded past.

This year’s budget provides slightly over Rs 400 crore for creating farm-to-retail supply chains for North-east India’s organic produce and bringing about two lakh rain-fed hectares (ha) under organic farming over three years. This is a small effort considering that more than half of India’s 140 million ha is dependent on rain. The government perhaps expects the demonstration effect to charm more farmers. But are the claims made for ‘parmparagat krishi’ (traditional agriculture) ideological exaggerations like the record harvests produced by collectivist fervour in China’s Sputnik fields under Mao and the boundless capacity of Stalin’s tireless Stakhonovite workers?
It turns out that the Indian Council of Agricultural Research (ICAR) has been giving a hard look at organic farming since 2004 when a countrywide research project was initiated. This government has increased the test stations from 13 to 20 in just one year. Of 24 crops, 18 have given higher average yields that those grown with chemical inputs in multi-year, multi-location trials, says N Ravisankar, national coordinator and principal scientist, Indian Institute of Farming Systems Research (IIFSR) at Modipuram, near Delhi.

Organically-grown peas, it was observed, gave the highest (18 percent) average yield increase at 6.3 tonnes/ha over conventionally grown ones. But National Horticulture Board statistics say this is lower than country’s three-year average of 9.2 t/ha. Basmati rice yielded 3.1 t/ha on average in 67 observations, which is lower again that the output which Punjab farmers extract for a blockbuster variety called Pusa 1509. In the case of wheat, lentil (masur), potato, mustard, sunflower and radish, yield declines of up to five percent were recorded.
After a talkathon in January IIFSR recommended organic farming for rain-fed, dryland and hilly areas where chemical use for plant nutrition and pest, disease and weed control is low. The transition in these areas will not result in any yield loss. It cites the example of Sikkim, where fertiliser use was 21.5 kg/ha before it went wholly organic. (It is zero now, compared to 51 kg/ha for the north-east zone, and the all India average of 125kg/ha). Sikkim’s paddy yield has increased from 1.43 t/ha in 2002-03, before the organic project was initiated, to 1.81 t/ha. (India’s six year average is 2.3 t/ha). There was no yield loss during the transition period. Similar results were seen in maize, buckwheat and finger millets.

For the food bowl areas where intensive chemical-based agriculture is practiced, a ‘towards organic’ strategy is recommended, that is, half to three quarters organic manures, with chemical fertilizers and need-based application of pest, fungus and weed killers. With this combination the texture of soil improves and microbial population rises within four to five years, enhancing water-holding capacity and the use-efficiency of applied nutrients. Yields are said to match those of fertilizer-based agriculture in five to eight years.
The two-pronged strategy can improve food quality and feed a growing population, Ravisankar says, provided organic farming is done scientifically, laying emphasis on the last word. In this sense it is not a return to pre-Green Revolution practices, when traditional organic farming kept India dependent on imported cereals.
While farmyard manure (FYM or cattle dung) is rich in micronutrients and organic carbon it has just 0.5 percent nitrogen, up to 0.4 percent phosphorus, and 0.3 percent potassium. A plant called dhaincha has a higher percentage of the first two nutrients but nowhere near that of urea (46 percent nitrogen), single superphosphate (16 percent phosphorous) and muriate of potash (60 percent potassium). Is organic farming viable if huge quantities of scarce organics have to be applied?

To meet the nutrients needs of rice and wheat grown over one acre, 25-30 tonnes of FYM is needed. Since agriculture is by and large mechanized, this is impractical. The institute recommends five tonnes each of FYM, earthworm-digested vermi-compost, and neem- or castor-oil cake per acre. Besides, a month-old crop of dhaincha grown over the same area should be ploughed in. A legume crop, say moong or green gram if part of the annual crop mix can cut nitrogen supplementation by about a quarter, it says.
Such protocols have been devised for 22 cropping systems, says Alok Sikka, ICAR’s deputy director general.
Sceptics might find these practices imposing additional workload on farming households. The institute disagrees.
If inputs are sourced from within a farm, costs have been observed to be lower than for chemical-based farming by 13 percent. If bought, they can be 15-20 percent higher.
But claims made for Panchagavya, biodynamic preparations and zero-budget natural farming, for which its champion, Subhash Palekar, was awarded the Padma Shri earlier this year, seem to be exaggerations. Panchagavya is a fermented mixture of cow dung, cow piss, water, ghee and curd to which jaggery and bananas can be thrown in.
There are nine biodynamic preparations made from banyan tree soil filled into cow horns and buried in earth. Overtime, this is said to produce a microbe-rich culture which can enrich compost and ward off fungal diseases.
Subhash Palekar’s zero-budget natural farming relies on crop residue mulch and secret formulations called beejamruth and jeevamruth made from virgin forest soil.
A 2011-12 study under the organic farming project in Coimbatore found that the sole use of Panchagavya gave a per hectare cotton yield of 886 kg. Biodynamic preparations alone yielded 958 kg/ha. A combination of Panchagavya and biodynamic preparations gave 1,085 kg/ha. A mix of FYM, non-edible oil cake and Panchagavya yielded 1,501 kg/ha. This was the case with rabi maize too.
Zero budget natural farming tested by the Institute of Organic farming at the University of Agricultural Sciences, Dharwad over three years from 2010-13 on four cropping systems involving cotton, groundnut, chickpea (chana), maize and sorghum gave the lowest yields compared to wholly organic, wholly inorganic and a combination of the two.
The focus on soil health is necessary to make agriculture sustainable. But organic and ‘towards organic’ farming is constrained by the availability of responsive seeds, since Indian agriculture is tuned to chemical use. The appropriate seeds will have to be developed through conventional breeding or by screening for suitable varieties from the available ones.
Farmers who are not hung up on organic certification can also use genetically-modified seeds, of which only Bt cotton is approved for cultivation India. Such seeds, which produce their own insecticide, are favoured by conservation zoologists like Ullas Karanth. But ICAR scientists blanched at the very mention, because GM crops are in a grey zone at the moment.

(Link to column in Financial Express)