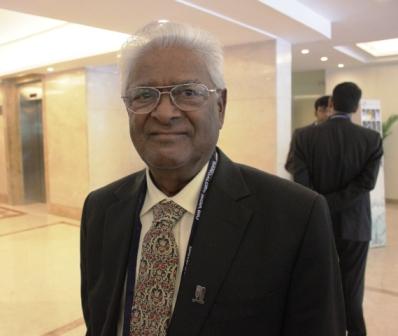 India must think for itself and not be guided by Europe’s negative attitude to GM crops, says the winner of the 2014 World Food Prize. A report by Vivian Fernandes.

The next green revolution will begin in biotechnology but ‘India has gone complacent’ about food security, says Sanjaya Rajaram, winner of the 2014 World Food Prize and director of Resource Seed International, a company which does work on wheat and barley. ‘We have to become more efficient’ says the Mexico-based scientist from Karnataka whose team has produced over 200 wheat varieties, combining different gene pools that are more productive and adaptable to different agro-climatic condition. ‘(T)he priority must be on providing technology and training to farmers on marginal lands.’

With population growing and urban spaces expanding, the emphasis must be on making the best of available land. Crop land and pasture occupy slightly less 40 percent of the earth’s ice-free land, says Rajaram.  It is possible to expand area under agriculture by reclaiming the remaining rain forests but that would ecologically damaging Though he loves agriculture, Rajaram admits it one of the biggest contributors of green house gases like methane. Fertiliser washing off from fields pollutes rivers and ground water.’ ‘We must do precision farming. There must be more efficiency in the use of fertiliser and chemicals. Customised blends of fertiliser must be applied according to the requirements of soil.’

Sanjaya Rajaram speaking to journalists.Next to him is K K Narayanan, MD of Metahelix Life Sciences. M Mahadevappa, former V-C of University of Agricultural Sciences, Dharwad,  is behind.

For Rajaram there is no trade off between organic and advanced agriculture. ‘I see a great role for organic farming in vegetables and horticulture.’ Since India is largely vegetarian it scores over other nations in converting crop calories into human energy. According to him, 89 percent of crop calories feed people directly in India compared with China’s 58 percent, 61 percent in the European Union, Africa’s 72 percent, Brazil’s 54 percent and the world average of 55 percent. The rest goes into feeding livestock and producing bio-fuels and industrial raw material. ‘You are okay that way,’ he says.

Rajaram, who set up a wheat programme at the University of Agricultural Sciences, Dharwad (Karnataka) before going abroad (where he also works on rust in wheat), says India will have to raise the productivity of wheat from 3.4 tonnes per ha to 5.7 tonnes per ha by 2050 to be able to meet its requirements. This is possible through hybrid wheat and biotechnology. Similar productivity leaps will have to be achieved in rice, sorghum, pulses and oilseeds. ‘We can double the production if regulations allow us, if the laws permit. (GM) technology is no good if it remains on the shelf. It has to be applied’.

India would not be an outlier if it did so. The world has 116 m ha under biotech crops he says (According to ISAAA, an international service that tracks biotech crop coverage, it was 181.5 million ha in 2014).  Millions of farmers in 29 countries, 19 of them developing ones,  grew them in 2011. India should think independently. ‘I do not want Indian legislation to be guided by European Parliament.’ The EU can oppose GM technology as European scale of operations is not comparable. ‘People living in heated houses and ivory towers cannot tell us follow them.’ He asked why Syngenta, a European crop science company was doing research in GM technology. Syngenta’s website (accessed on 8 March, 2015) says it sells seeds for GM corn, soyabean and sugar beets and that the business contributed just a little less than 10 percent to global sales over the past three years. ‘My strong plea is that we not only embrace agriculture biotech but through legislation produce the correct technology packages at cheaper rates.’  India’s small farmers could not be compared with those of the West. ‘They need help.’

Rajaram did not expect Western European nations to change their stance on GM technology so long as environmental parties were in government. The battle is tough, even in UK.  He believes France may be the first to opt for GM.(On 13 January,, 2015 the European parliament says member countries would decide on their own whether or not to permit cultivation of GM crops. Spain already has 130,000 ha under GM maize, according to The Economist magazine)