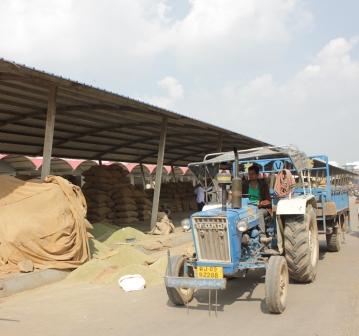 With global commodity prices headed for multi-year lows, the government will have to do more to improve the productivity of Indian farms and the incomes of Indian farmers. There must be a shift in agricultural policy from subsidies to incentives, investments and institutions, reports Vivian Fernandes.

The very people who made India self-sufficient in food themselves at times go hungry. Too many people living off too little, that is the story of Indian agriculture. When fifty five percent of the workforce (2011 census) depends on 14 percent of GDP ─ the share of agriculture ─ there will not be enough to go around.  A survey of 5,350 farmers conducted by Delhi’s Centre for Study of Developing Societies across 274 villages in 137 districts between December 2013 and January 2014 found one in ten farmers saying their families had to skip meals occasionally, not out of choice but of necessity. Eighty percent of the interviewees said they lived in huts or kutcha-pucca houses. Seventy percent thought city life was better. About the same proportion said their children wanted to work outside the farm. A fifth said they did not like farming because they saw no future in it, or the income was not adequate or they found it too risky and stressful.

This is reflected in desertions from farming. Between the 2001 and 2011 census, not only did the proportion of cultivators as a share of the workforce shrink, their absolute numbers also fell by nearly nine million. The share in workforce of full-time cultivators, and those engaged in agriculture part time also shrank by more than three percentage points to nearly 55 percent. The Planning Commission had projected a ‘net decrease of four million jobs’ in the five year plan ending 2017, against 8.8 million jobs contributed in the ten years to 2004-05, and no increase in the subsequent five years.

This trend is endorsed by the national sample survey for the crop year July 2012 to June 2013. Results of the survey released at the end of December 2014 show that only 39.5 percent of rural households (60 million) were dependent mainly on agriculture.

The numbers of those living off agriculture may be falling but they are still large. And when they share just 14 percent of the GDP, life will be a pinch.  At last count, the average rural Indian’s monthly consumption expenditure was Rs 1,430. This was eighty four percent less than that of the urban Indian, with wide variations across states. The median expenditure in rural India was Rs 1,198, which was about half their urban peers.

People leaving agriculture will actually make it paying for those staying behind. Before the current economic downturn more jobs were being created in the construction sector because of infrastructural investments and they were more remunerative. More women have also been taken out of the workforce because of a vigorous school enrolment drive which began under Prime Minister Atal Behari Vajapayee and has been continued by his successors.

‘For the first time we have a decline in the workforce in agriculture and I don’t see anybody celebrating this,‘ Montek Singh Ahluwalia, the former Deputy Chairman of the Planning Commission (now replaced by NITI Aayog) said early in 2014. ‘We should have been worried if this was due to rural distress, but the farm sector has grown faster with a rise in real wages and rural consumption growth rates.’

Between 2006-07 and 2011-12, there was a 6.8 percent average annual rise in real farm wages. This is ‘unprecedented during the last two decades and presumably even before,’ said Ashok Gulati, former chairman of the Commission for Agricultural Costs and Prices, and his team, in a paper on farm wages in India.  A combination of overall economic growth – resulting in a boom in construction activity – as well as the ‘push’ given by the rural employment guarantee scheme, was responsible, they said.  (But farm wage growth recorded just 3.8 percent growth in November 2014, over same month a year earlier, the lowest since July 2005, Harish Damodaran  and Surabhi reported in the Indian Express. Declining non-farm employment opportunities, the Modi government’s indifference to MNREGA, the rural jobs scheme, and falling crop prices  are the causes. Till June 2014, farm wage were growing in double digits. In June 2011 they had touched a peak of over 20 percent.)

Indian agriculture is not in terminal decline. From shipments-to-mouth in the years after independence to export shipments now, it is a story of remarkable success. Food grain production has grown five-fold over sixty years to reach its highest level this decade, even while the total cropped area has increased by half during this time. Cropping intensity and yields have increased.  In cereals, cotton, vegetables, fruits, milk and eggs, India ranks among the top three in the world.

In the last two years, India has exported 40 million tonnes of rice, wheat and maize.  This has never happened since Independence and perhaps in India’s recorded history, says Gulati.  The growth of agri-exports has been much faster than that of manufactured exports, particularly during the past ten years with a sizeable trade surplus which shows that India’s agriculture can compete in world markets.  Agricultural exports doubled in the 1990s to $6.25 billion and nearly quadrupled in the last decade to $24.5 billion.

There are two reasons for the jump in cereal exports: one is the National Food Security Mission launched in 2007 to increase annual production of rice, wheat and maize by twenty million tonnes by making better seeds available to targeted districts in 27 states, based on their agro-climatic conditions. Farmers in these districts were taught improved farming practices and holistic pest management. They were introduced to soil fertility enhancers and machinery, including devices to reduce the use of water. The Mission has been extended till 2017 and now covers coarse cereals and commercial crops.  Secondly, despite a ban on exports, procurement prices were raised to align them with global levels. In the five years to 2004-05, the support price of paddy inched up from Rs 490 to Rs 560 per 100 kg. But in the following years to 2012-13, it more than doubled to Rs 1,250.  This was the case with wheat prices too. As a result food grain production increased by 42 million tonnes in 2011-12 from six years before.

Indian farmers have shown that like any economic actor they respond to incentives.  These, plus investments and the right institutions ─ the 3Is, as Gulati calls them ─ can enable Indian agriculture to be a sunrise industry. The urgency of these now cannot be over-emphasized as commodity prices have declined and are headed for multi-year  low.  The Food and Agriculture Organizations’s food index had declined to 188.6 in December 2014 from a peak of 229.9 in 2011. That was from a low of 97.7 in 2003, says Harish Damodaran of the Indian Express.  Vulnerable Indian farmers (see box below) need support from the government in terms of income transfers, as also investment in rural roads, assured power, broadband connectivity and agricultural research & extension. Our farms must become much more productive and producers must get to keep a larger share of the price.