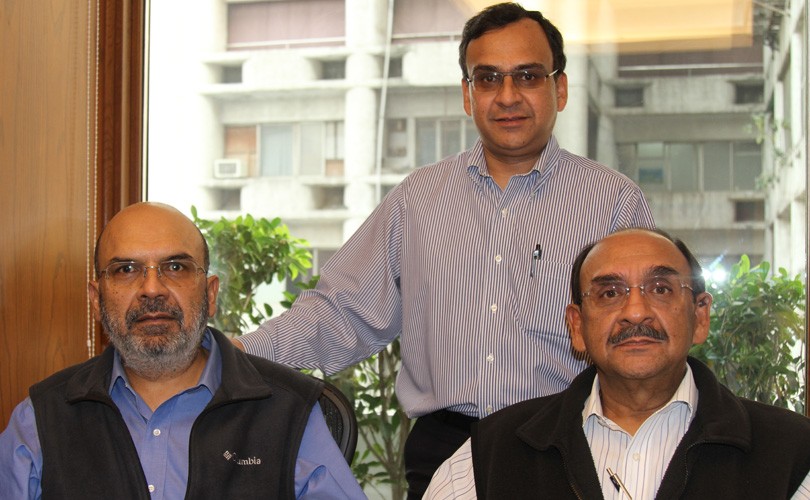 Indian agriculture is facing headwinds from government policy. The dairy industry is worried about restrictions on cattle trading. The menace of stray cattle is keeping farmers awake at night. Denied access to cost-lowering technology, they are acquiring it illegally, herbicide-tolerant cotton being an example. The seed industry is split. Patent holders feel their intellectual property is not safe. Agri-biotech companies have scaled down research activities or are shifting them abroad.

In this interview to Vivian Fernandes, first published in the Financial Express, the brothers Shriram ─ Ajay, Vikram and Ajit ─ express their concerns. They are respectively Chairman & Sr MD, Vice-chairman & MD, and Joint MD of DCM Shriram, a holding company with interests in seeds, fertilizer, sugar and heavy chemicals.

There has been no crop other than cotton with genetically-modified (GM) traits approved for cultivation since 2002. The environment minister has kept approval for GM mustard in abeyance despite a recommendation in May by the regulator.  Since opposition to GM crop technology cuts across political parties, don’t you think agribiotechnology companies must cease research in this area?

Ajay Shriram:  All have seen the advantage farmers have got (from Bt cotton).  The income to farmers has more than doubled, output has more than tripled, and India is today among the largest cotton-producing countries in the world.  What is happening with Bt cotton now (the emergence of pink bollworm resistance to it in Maharashtra) is an aberration.  For the sake of farmers and the country’s food security we cannot let a short-term or narrow view prevail. There are 18-20 Bt products (that is crops with Bt insecticidal genes) in the world. Many are of the edible variety. Where is the evidence of something negative?

The parliamentary committee headed by Renuka Chowdhury gave a report earlier this year, advising extreme caution on GM technology despite six ICAR institutes testifying there is no evidence that Bt cotton or GM crops cause harm.

Ajay Shriram:   The communication must be kept open.  We must educate people better. Industry must take it up more actively with scientific proof. China has bought Syngenta (a Swiss producer of pesticides, herbicides and seeds with GM traits, in May) for $43 billion to ensure their food security. And here we are throwing out (troubling, actually) a company which has helped our farmers. And whose potential to help is a lot more. Leave alone Monsanto-type companies, we had Indian companies which have done work on mustard seed.

MNC unfortunately is a dirty word without any rational thinking behind it. Look at the products they are bringing in? Where have they done something negative to the country? Why is GM mustard (developed by a team of Delhi University scientists with funding from the National Dairy Development Board) which has been tested for 12-15 years being blocked?

Even if GM crops are approved, can scientists and research companies be assured of intellectual property right (IPR) protection, given that the agriculture ministry has capped retail prices and trait fees and even made an attempt to set aside patents?

Ajay Shriram: I am glad that the government stopped (in waiving patents on GM crop traits using the Essential Commodities Act in May 2016).  IPR is someone’s effort, investment and brains. If you say, ‘I will control what you are going to do with it’, it is going to change the way business is done.

Within the seed industry there is no unanimity on whether the Indian Patent Act or the protection of plant varieties act should apply to GM plant traits.

Ajay Shriram: That is why we broke away (from the National Seed Association of India). Why will anyone come to the country if they feel their intellectual property will be stolen here, or passed on without the correct value, or migrate from here to other countries? India needs to build its credibility. The government has worked to ease the way of doing business, the regulatory environment, there is competition between states, it has rescinded (unhelpful) laws. It has done so many changes and (yet) we are losing out. We are not able to understand what the farmer is gaining?

The regulatory hurdles to obtain approval for GM crops are quite high for those who follow the law. On the other hand the technology is freely pirated as is evident from the reportedly widespread cultivation of unapproved cotton genetically-modified for herbicide-tolerance.

Vikram Shriram: I think it will change once farmers experience the ill-effects of uncontrolled quality of the underlying hybrid. There are reports of farmers losing out on yield. While herbicide tolerance is there, the genetics is not strong or the germination is less. Ultimately the farmer will lose out. In a matter of 2-3 years, farmers will realise a branded certified product is worth investing in.

There is a demand for denotification of the widely-used Bollgard II Bt cotton technology on the ground that it is not effective against bollworms.

Vikram Shriram: It continues to be effective against American bollworm and many other pests. So many states have said they want the Bt cotton to be regulated and not to be denotified. This happened in a recent meeting where states have stood by the benefits of BGII against many pests other than pink bollworm.

A lot is demanded of seed companies but government departments are not playing their part in enforcing practices like planting non-Bt cotton in Bt cotton fields for bollworms to feed on so that their evolution into resistant species is delayed. There is a governance failure.

If the government decides that despite there being no evidence of harm caused by GM crops, it will still not approve them for cultivation because there is no political acceptance shouldn’t seed companies move on? Why be fixated on one technology?

Vikram Shriram: It is unfair to farmers and also to Indian seed companies. Multinationals operate in various geographies where they can do research and development.

Ajay Shriram: MNCs will continue developing (the technology outside India. Indian firm can’t. Some years on when government policy changes they will jump in with their developed technologies while Indian companies will be far behind. We will be promoting international companies to get a stronger foothold in India. This policy is weakening Indian companies from doing research and development. They (the policies) are actually helping MNCs.

Mahyco recently said it was relocating its agri-biotechnology researchers to Vietnam, Tanzania and Zimbabwe. Is there a similar thinking in your company?

Vikram Shriram: We have increased our activities in the Philippines so that we do not lose out completely. Philippines allows GM crops. We are doing research there in GM traits – drought resistance, salinity resistance, nitrogen-use efficiency, heat tolerance…. These are long-term projects. We don’t want to be completely left out. But our R&D core is here; our lab and farmers are here.

Some seed companies say trait fee must be capped but not retail prices because with uniform pricing they have no incentive to develop better hybrids.

Vikram Shriram: Neither on the trait value nor on seed value there should be any cap. The farmer will decide whether he wants to pay more for seed which gives him higher economic return.

Ajay Shriram: I think trait-value capping is absolutely wrong. We want to move to the world stage as a country open for business and what are we doing? Who is objecting? Not the farmer or the consumer but a set of people for what reason we do not know.

Ajit Shriram: Our soils are depleted. The carbon content is low. The usage of nitrogen is high. Good quality seed is a prime necessity for the farmer to deal with climate change.