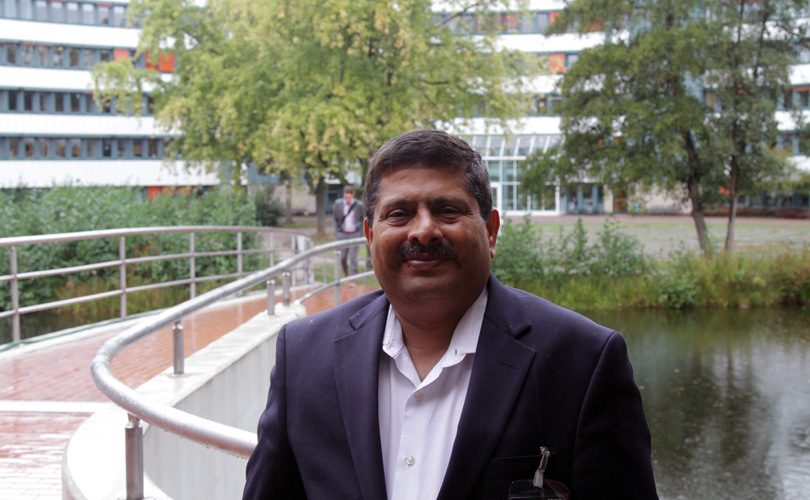 C. S. Prakash is a professor of plant genetics, biotechnology and genomics at Tuskegee University, Alabama, USA,  where he has been teaching since 1989. He oversees genetic improvement research on food crops of importance to developing countries and has trained many scientists and students. He has also been actively involved in enhancing societal awareness of food biotechnology issues around the world. He has funded projects on peanut genomic research from USAID/Zambia; serves in the USAID Agricultural Innovation Partnership project to enhance agricultural innovation in India in partnership with Cornell University; and partners with UCLA is an innovative distance learning programme on genetics through interactive live video including lecturing in an online course. Prakash also serves as editor-in-chief of the journal GM Crops. He is an avid tweeter and his handle is @agbioworld.  Vivian Fernandes interviewed him at Monheim in Germany where he was attending Bayer’s Future of Farming Dialogue 2019.

Should India extend the same regulations that apply to transgenics or genetic modification of plants to gene editing?

No. Not really. Gene editing at its core is nothing more than mutagenesis that we have been doing for the past one hundred years without any regulation. Now we are going to do the same with a little more knowledge and more precision so there are not going to be any new genes introduced and most of the changes that we make would have happened in nature given time and so I don’t think we should regulate it like GMOs (genetically-modified organisms).  (However) We should keep an eye on it because there may be some safety questions.

How have the major food-producing nations approached it?

Many countries including the United States, Canada and Argentina have said that gene editing will not be regulated like GM. USDA (US Department of Agriculture) is not even going to regulate unless the traits warrant any regulation. It considers it safe unless it proves otherwise. I think that is a sensible approach and (if ) India follows that way (it) has much to gain from some of these newer technologies in their potential to improve food production or make food safer, cut down the use of pesticides, and definitely make crops more tolerant to drought and flooding because of the climate that we see today.

The EU does not seem to agree…

Yes. The European Union has had a different approach but on the other hand, there is less at stake in the EU  when it comes to food security and some of the innovative technologies. There is a lot of politics. Trust me, if gene editing can help stem some crisis that erupts today they are going to be embracing it. They have the technological wherewithal to do so and India should do the same.

Why do you think the EU is not much concerned about climate change and food security?

They are concerned about food security. They are definitely concerned about climate change. But the stakes are not as high because Europe is a much smaller continent with fewer people than India or China and they have an excess of food production as I saw when I visited a field – the farmer was being paid not to plant any crop. To keep the land fallow they provide money.

On the other hand, Europe is also one of the largest consumers of genetically-modified food. It is the largest importer of GM soybean from the US, Argentina and Brazil. Otherwise, the European livestock industry would not survive, and 80 percent of their cheese is made with genetically-engineered enzymes.  They are not as much anti-genetic engineering. They are just at the moment not allowing their farmers to grow GM crops.

Why do they have a different approach to agriculture?

I would think it is a cultural issue. Europeans have a completely different cultural approach to food. The food is (eaten) slower here. It has a spiritual dimension. They believe that by indulging in genetic engineering they are going to be spoiling the sacred nature of food. It is a perception because food crops are being improved all the time. There is also a greater influence of the Greens, especially in Germany and France.  All this has made a toxic cocktail of anti-GM policy.

Is the organic movement organic in the sense that has it emerged from the felt experience of people (against industrial food) or has it been provoked by lobbies?

It has definitely been driven by economic interests. There is a marketing niche for organic.  People who are affluent, who have expensive houses and expensive cars don’t like to buy the same rice and wheat as common people and an organic niche has opened up as a market differentiator to cater to the elites. It makes them feel that they are helping the environment or the food is safer, both of which are not true.

You mean the organic food industry is driving the opposition to GM?

In the US definitely yes, because we do not have an environmental movement like the Greens here and any opposition one sees against GM crops in the US like lobbying to make labeling (compulsory) has been driven almost 100 percent by the organic food industry.

With data-driven agriculture, precision agriculture, isn’t there a fear of farmers losing their autonomy? They are dependent on corporations for hybrid seeds. If the corporations are going to tell them what to plant where and what to apply, farmers might end up being franchisees in a way.

As long as there is competition and farmers benefit and they don’t lose any autonomy that will simply be a perception. Most farmers love hybrid seeds because it has made them very prosperous. It has provided them with a kind of economic return that they could not have imagined otherwise.