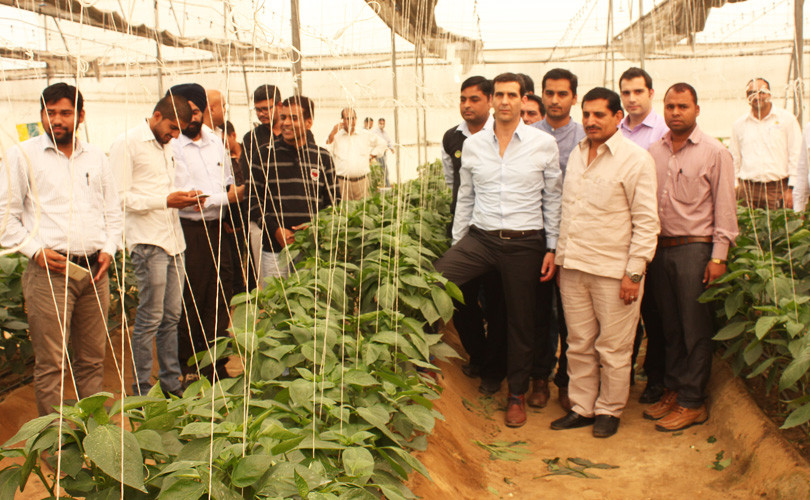 Protected agriculture as pioneered by Israel has high capital cost but it insures farmers against weather risks. Farmers in the vicinity of cities can make high profits by growing exotic or off-season vegetables. But it is important for them to be integrated with labs and markets, reports Vivian Fernandes after a visit to the Indo-Israel central of excellence for vegetables at Gharaunda in Haryana. This report was first published in the Financial Express.

‘If you do not adopt a technology with full-fledged package of practices this will become a dangerous for you. Not only agriculture, every technology is dangerous if you don’t adopt it in a proper way. Even driving, even doctor, even engineering.  In the case of poly house this protected cultivation is the same thing. If you bring the nice green house and you make a wrong seed, or a different genetics you kill all the concept. This don’t give you the profitable yield and my objective is to make the cost-benefit ratio.’

At the centre of excellence for vegetables at Gharaunda in Haryana’s Karnal district I am as fascinated by horticulture officer Satyender Kumar Yadav’s unselfconscious delivery and disregard for syntax as the manner in which  tomatoes, capsicum and melons are grown in pest- and disease-free, climate-controlled poly houses. Yadav has the practicality of a farmer. The sense is important, not the embroidery.

The four-letter word sticks to the mind. This is bovine country where the cow, and not daughter, has first claim on affection. The slogan, Pehli roti gai ki, comes to mind. But Yadav uses  b**f to mean large ─ tomatoes 100 grams to 450 grams each, unlike cherry types, the size of grapes.

For small holders in India, the cultivation of open field crops like cereals is not paying. They are shifting out or straining to. They can opt for profitable crops like offseason vegetables grown in protected conditions.

This is where Israel’s expertise comes in.  Israel and India are not comparable. One is a nation of eight million people, the other of 1.25 billion. Arable land per person is three times more in India than in Israel (0.04 ha). The one has about a quarter million hectares of cultivated land (283,000 ha), while the other has 140 million ha or five hundred times as much. Yet Israel exported agri-produce worth $2.12 billion in 2011, which was a twelfth of India’s exports of $24.44 billion that year.

Israel excels in agriculture as a matter of survival. For small holder farmers in India, farming is also a matter of life and death. Not every Indian farmer can do high-tech agriculture. But the enterprising can attempt it if other conditions permit.

The Gharaunda centre has inspired 1,400 farmers in and around Haryana.  It supplies six million seedlings every year at Rs 2 each. They are bred for resilience and uniformity in plastic trays with kulfi-like moulds. This allows the young plants to be transferred to soil without suffering transplanting shock.

During incubation and thereafter the plants grow in a poly houses . Double doors prevent the entry of pests. Water and nutrients are supplied regularly through drips implanted in the soil so that roots do not waste energy chasing them. The quantity of both is regulated with meters that measure electrical conductivity and pressure. Temperature is maintained by exhaust fans that draw in air through wet screens like desert coolers. The temperature should ideally be 28-30 degrees centigrade. Foggers regulate relative humidity.  They also spray nutrients and chemicals. Sun screens keep off harsh light.

A poly house costs Rs 840 a square meter or Rs 34 lakh per acre without subsidy.  Yadav says the farmers associated with his centre make a profit of Rs 5 lakh a year. They can recover investment in two years if, say, cherry tomatoes sell for Rs 20 a kg.  There are less expensive, walk-in tunnels, too.

Tomato vines drawn with trellis wires grow up to 25 feet and yield fruit for nine months. Secondary shoots have to be clipped for plants to grow tall. Every fourth node has a cluster of tomatoes. Four workers are needed per acre. They have to be diligent and disciplined.

The technology is not new. In the late 1980s, PepsiCo had introduced long-duration indeterminate tomato varieties to Punjab. Unlike table tomatoes, these were high in solids and uniformly red in colour to meet the puree specifications of the fastidious Japanese market. PepsiCo did horticulture to be allowed to sell ‘non-essential’ soft drinks in those pre-liberalization days. The varieties were suitable for Indian conditions where labour for fruit picking was abundant (then) and the high cost of capital deterred large-capacity processing plants.

Israel has only 64,000 farmers. Agriculture is done by cooperatives which get land from the state on 49-year leases. Private farmers tend to pool resources. Scientists, extension workers, farmers and processing industries are integrated. Farmers push the companies to innovate.

Under the Indo-Israel partnership, twenty one centres of excellence are being set up in nine states for dairying, bee-keeping, floriculture and horticulture. Dan Alluf, the official in India in charge of Mashav, the Israeli agency for international cooperation and development, says these centres train the trainers so that skills can ripple though the farming community.

‘The farmer usually has a traditional approach. He will not do extreme changes in his farm and he is right. He shouldn’t. What he is doing I am sure he has a good reason to do so. And we are not forcing,’ says Alluf, trying not to ruffle local sensibilities. The farmer can choose what he likes and come back to the centre for more. ‘We are setting expectations and not bringing a solution in a month. We are doing it is a very conservative pace and we are all the time communicating and talking.’

The collaboration entered the third, three-year phase this year.  A facility for imparting training in the use of treated and recycled sewage water for irrigation is being set up in dry Aurangabad. Though half of Israel is desert or desert-like, farmers get irrigation water on demand, for a fee. It is no longer rationed. Of 1,180 million cubic metres used, 680 mcm is recycled or brackish.

The integration of farmers with the lab and the market can be done in India through contract farming. The scale cannot be like that of Israel, but can be stepped up. The cultivation of potatoes for McDonald’s, the US fast food chain, by its Canadian supplier, McCain, in Gujarat’s Banaskantha district is a fine example. Farmers around big cities should be able to have such arrangements for fresh produce. They can use the purchase agreements as security for bank loans. Contract farming will take care of the price risk, while poly houses can insulate against weather risks.  India must push this in every possible way, including foreign investment in retailing. Sadly, the government could not pluck the courage in its pre-Diwali relaxation of caps and procedures for foreign investors.

(Top photo: Dan Alluf (in blue shirt), Israel’s attache for international development with horticulture officials at the Centre of Excellence at Gharaunda in Haryana on 3 November, 2015. Photo by Vivian Fernandes)