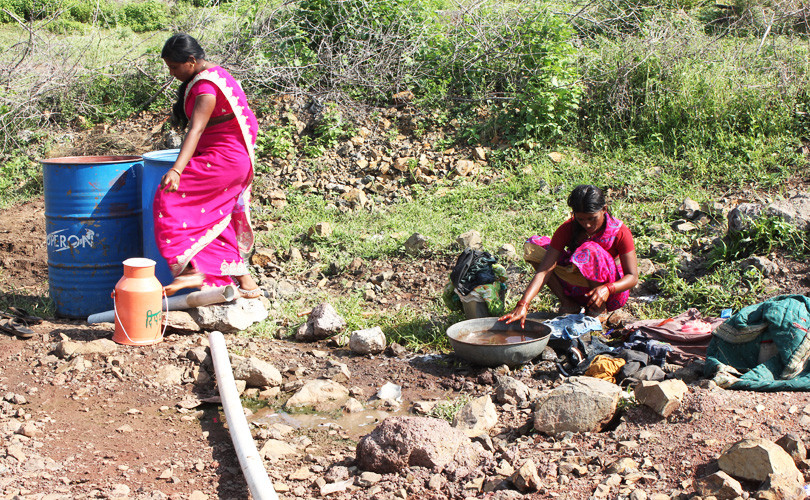 In Marathwada, land under cultivation has remained flat over the past ten years and so has the intensity of cropping. But preference for crops that fetch higher returns over traditional ones that could endure long dry spells is hurting farmers more acutely than before when rains falls short, reports Vivian Fernandes.

Showers in September have pulled a pool-table like felt on Marathwada as if covering up for the truancy of rains for much of the monsoon season. But this drought-prone region of Maharashtra will have to change its cropping patterns if it does not wish to suffer as acutely from deficient and erratic monsoons as it did this year.

The Indian Met Department says all but Aurangabad of Marathwada’s eight districts had deficient rainfall from beginning of June till end of September. The deficit ranged from fifty four percent in Parbhani to sixteen percent in Aurangabad. Overall, the region had received just sixty percent of the normal rainfall. Even the little rain was irregularly spaced. In the crucial month of July, for instance, Aurangabad got just one day of heavy rain and four days of drizzle.

Such interruptions are very damaging for crops like soybean which has spread like rumour. The vice-chancellor of an agricultural university in Parbhani says it covers 35 lakh hectares (ha) from just two lakh ha in 1990-91. In Ukhanda village of Beed district’s Patoda taluk, Gopinath Vithobha Bondve, 56, was standing in a field of yellowing soyabean that barely touched his shins when it should have been waist-high, he said.

In some fields the crop had just shrivelled up and farmers had allowed an overgrowth of weeds, rather than despatch good money after bad.

Soybean cannot bear a dry spell of more than two weeks during the growth phase in July, unlike traditionally grown millets, groundnut, safflower and pigeonpea (tur) which can endure for longer, says B Venkateswarlu, Vice-chancellor of Vasantrao Naik Marathwada agricultural university in Parbhani.

Farmers have switched over in the past three decades, Venkateswarlu says, because there has been little improvement in the yields of traditional crops ‘despite best efforts’, unlike in the guest crops.  Soyabean, cotton, mosambi (sweet lime) and pomegranate have fed the rising aspirations of farmers, but they demand more water, Venkateswarlu says.  While area under cultivation has declined over the past ten years, it is made to sweat more intensely.

The region has struggled with frequent droughts over the past fifty years, but increased demand for water aggravates the impact of even moderate deficiency in rainfall.  Climate models for the region predict that monsoon seasons in future will see a few days of heavy showers and long dry spells in between.

Cotton is another crop that has caught the farmers’ fancy following the introduction of insect-resistant, genetically-modified Bt cotton in 2002, and good demand until this year from China. Over the past ten years, area under the crop has risen by 74 percent while production has increased by 171 percent, according to the state’s economic survey. Though hybrids for rainfed areas do not need much rain, deprivation during the first sixty days shows up in growth and boll formation. At Hivarshinga village in Beed’s Shirur taluk, the cotton crop of Rajendra Abaji Shinde, 41, a double graduate in arts and physical education, was a third of its normal height and the number of bolls was a tenth of that of a healthy crop. Shinde and his wife were weeding the fields when we met them, hoping flushes made possible by September rains would prevent a total write off, but it was doubtful whether they would recover more than the cost of cultivation. An attack of wilt has added the misery of cotton growers in the region.

In village Sarangpur of Jalna district’s Ambad taluk, Prahladrao Kakde, 61, was mulling a switch to his son’s fruit export business to the Emirates from growing them.  ‘Since 2012, I have never had a good crop,’ said the industrious farmers whose earnings from mosambi and anar have housed him in comfort and afforded professional education to his children. While his heart is in horticulture, repeated failure of the monsoon this decade, except in 2013, has weakened his resolve. Being long duration crops, farmers cannot decide whether they should cut losses or pour money to keep the trees going. On the way from Aurangabad to Parbhani one saw orchards with wide gaps like missing teeth. Kakde says he spent Rs 25 lakh on ferrying water by tankers for his 45 acre orchard two years ago and has sunk a similar amount this year.

Sudhakar Dhondibnhau Dhokle, 32, of Mojpur village of Jalna taluk says he has lost seven acres of both mosambi and pomegranate crops because the buds have dried up.  He is a cautious guy and has taken insurance. He paid Rs 20,400 in premium over three years. The compensation he got was 27,500 for one of those three years.  ‘My loss is twenty times more,’ he says.

Pulses are a prescribed crop for water deficient areas like Marathwada. Though prices of pigeonpea have touched record levels putting them beyond the reach of most consumes, area under pulses in Marathwada has remained flat over the past ten years; there has been an increase of just seven thousand hectares, according to official statistics. Area under cane, on the other hand, has more than doubled during this time. Cane needs 2,400 mm of rain while normal rainfall in Marathwada averages about 700 mm.

In the vicinity of the lower Dudhana dam we see about two dozen brand new harvesters, each costing about Rs 1.25 cr parked in the premises of Sri Bhageshwari sugar mills. It was founded as a cooperative by a politician and has now been taken over by a private infrastructure company based in Pune. To recover the cost of the harvesters, cane area has to increase. The cane fields around the mill are drip irrigated. They consume half as much water as flood irrigated cane fields, but it is still a lot of water. With the same amount of water, many more acres of pigeonpea could be irrigated and with just one support irrigation, yield would increase by about 30-40 percent.

Cane area should be capped, says Venkateswarlu and existing area compulsorily shifted to drip irrigation. According to the state’s sugar commissionerate, the Marathwada region has 58 operating mills.

‘Farmers will grow cane so long as they get the security of fixed income,’ says Jayaji Suryavashi, founder of Annadata Shetkari Sanghatana and a fixture on local television debates.  Assured purchase of cane by mills at rates fixed by the states, takes care of the price risk. Farmers have to worry only about the weather risk. This year’s crop has shrivelled up and is being sold as fodder. Venkateswarlu calls it a lazy man’s crop.

The university has published a booklet called, ‘What Beyond Sugarcane?’ in which it has identified potato and mulberry (for sericulture) as more profitable but less water consuming alternatives for some areas of the region. For the rabi season it recommends safflower, a hardly oilseed.

It is not as if Marathwada has been negligent. It has paid a lot of attention to arresting the run-off of rain water. ‘We have an excess of water conservation efforts,’ says Venkateswarlu. More important is to maintain the structures and the Jal Yukt Shivar programme does just that.

Water conservation will not help if the rate of extraction is more than the aquifer recharge rate in many talukas of the region.   Recurring droughts are reminding the people of Marathwada that crop economics must respect ecological concerns. Not doing so is suicidal like borrowing from sahukars at rates higher than the returns from farming.

The tab for this report and another was picked up by www.thequint.com, where both the reports were first published. Click here for the second of a two-part report. For the first part click here.