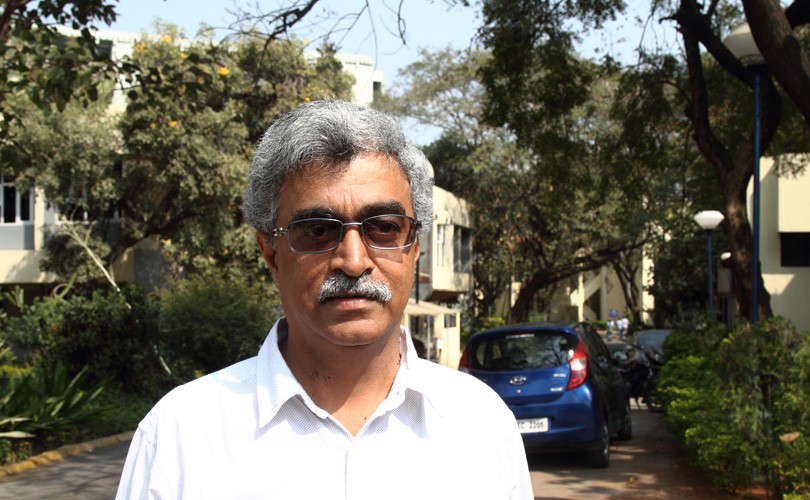 Ramesh Sonti is a molecular biologist and biotechnologist at the Centre for Cellular and Molecular Biology (CCMB), Hyderabad. He has been working on making rice varieties resistant to various diseases using molecular market-assisted selection. In 2004, he was awarded the Shanti Swarup Bhatnagar Prize for Science and Technology, the highest science award in India, in the biological sciences category. Vivian Fernandes met him in Hyderabad to know about his work.

Bacterial blight is a serious disease in rice for which there is no chemical control. The pathogen enters the leaf through openings at the tip. It moves through the circulatory system of the plant. The pathogenesis process involves degrading the walls of the rice cells and sucking away all the nutrients. Ultimately there are so many bacteria, that the leaf dries up.

Developing a host plant with resistance is the best way of managing yield losses. Fortunately there are rice varieties that have different genes for resistance against bacterial blight and each gene works against a subset of the bacterium.

We started the research in 1995. It was a collaboration with the Directorate of Rice Research in Hyderabad, now called the Indian Institute of Rice Research (IIRR). Our objective was to look at the genetic diversity of the pathogen with the goal of identifying resistant genes (in rice) that will be effective against Indian isolates of the pathogen. For a few years we collected isolates from different locations, looking at their genetic diversity and identifying which resistant genes are effective.  We came upon three genes that between them, when put in one variety, would take care of infection from all isolates prevalent in India.

By that time, the International Rice Research Institute (IRRI) in the Philippines was working in collaboration with Punjab Agricultural University (PAU) and they developed a variety called SS-1113. The scientist was Sukhwinder Singh. It had all the three genes which we were interested in, in one particular background and that too within an Indica background which was available in India. All three had been assembled into one variety but its quality was not very good so it was not popular with farmers.

We were looking at a variety called Samba Mahsuri, which is very popular in the southern states ─ Andhra Pradesh, Telangana, Tamil Nadu and Karnataka. It is now grown in Uttar Pradesh, parts of Chhattisgarh, and parts of Orissa. The variety is in supermarkets all over India. It is also called Sona Mahsuri and Kurnool Mahsuri. It has excellent eating qualities. its yield is good. But it is susceptible to bacterial blight.

Now many of the rice varieties have been made resistant to bacterial blight. In the case of Pusa Basmati 1, the Indian Agricultural Research Institute (IARI) felt that given the distribution of the isolates in the target area, two genes would be enough to give resistance. Since Samba Mahsuri was being grown on a wider area than the basmati variety, we felt three genes would be needed.  Our decision has turned out to be right.

The challenge here is: the donor variety has resistance but it does not have good quality.  Samba Mahsuri has good quality and yield  but is susceptible. In crossing the two, the danger is along with the resistant genes from the donor, some unwanted traits could come in.

We set up a scheme that was meant to maximise the possibility of getting the resistant genes from the donor and as little other genetic information as possible. A scheme is a breeding process where we use molecular markers.  It is molecular marker-assisted selection.  We use DNA markers to identify within a segregating breeding population which are the plants that have the genes of interest. These are native markers; we do not introduce anything else. Plant breeding is essentially the art of finding the one or few plants within the segregating population that have the desired characteristics. Using DNA markers as flag posts, we designed a scheme to get the maximum contribution from the Samba Mahsuri genome. The process took three years.

The genetic diversity work started in 1995. By 1999, we had a pretty good idea what genes we wanted and which is the donor variety. Then it took three years to do the crossing. By 2003 we had what we wanted. After that we had to stabilize it because these plants still keep on segregating. It is a variation of traditional plant breeding so there is a lot of variation other than what you are looking at. So you have to do some selections to pick the right plants. That took a few years. This variety which we called Improved Samba Mahsuri was one of the first rice varieties to be developed through biotechnology.  The rules for testing it in field trials came up as the variety was being developed. The biotechnology aspect is in the markers.

Some of the genes we are looking at are what are called recessive genes. In the breeding population you cannot determine which has the resistant gene because there will be a wild type copy and the gene will not be expressed. It will be expressed only when both copies have the resistant genes. Through traditional breeding it is very difficult to achieve that. We had two such recessive genes and one dominant gene and the DNA markers that we had used were actually identifying plants that were closest to Samba Mahsuri.

Around 2008 Improved Samba Mahsuri was notified as a variety by the government. In 2009 it was released on a small-scale to a few farmers in the Kurnool area (Andhra Pradesh) to whom we gave free samples. After 2011, we started going into larger areas. It is now being grown on about a 100,000 ha in different states and these are hotspots of the disease. (The area under Samba Mahsuri alone is around 2 million ha).  So, the area that grows Samba Mahsuri where bacterial blight is a problem will be anywhere between 500,000 ha to 1 million ha.  There is a lot of scope to get the product that we have to farmers.

In collaboration with IIRR and Bayer CropScience we have been collecting isolates from different parts of the country. We find there is no bacterial isolate in India that can defeat the variety that has the three resistant genes. There are those that break down the ones that have two genes. We made a good decision in putting three genes. Otherwise, by now we would have been scrambling.

What we are now doing at IIRR, PAU and CCMB is trying to develop alternative sources of resistance. We have mutagenised Samba Mahsuri , which we have screened for a  variety of traits, and one of the traits is bacterial blight resistance. We have some mutants which have good resistance.  Each mutant will be mapped. When we get the DNA marker that is near it, we can do marker-assisted selection.

As of now Improved Samba Mahsuri is holding out and may do so for another eight years or so.

Resistance to Other Diseases

In the areas where we are popularising Improved Samba Mahsuri, one of the diseases we found was sheath blight. It is a fungal disease. When we started the work there was no known resistance to sheath blight in the rice germplasm.  The fungus comes from the soil.  Ultimately the tissue dries up. It is a serious problem. There are fungicides against it but no known source of resistance. Even transgenic approaches have not been successful.  There is no variation in the rice germplasm for resistance against this, so we mutagenize it and generate variations. For mutagenesis, we treat the seeds of Samba Mahsuri with a chemical that will induce variations within the gene.  We are modifying the genes without adding any new genes. This has been done for decades. It is a random process where the mutagen will act on the DNA and there will be a huge population. In that population there will be plants that will possibly be resistant to sheath blight.

We have four lines that have resistance.

There is another rice insect called Yellow Stem Borer.  In 2012, when we started there were no resistant rice variants. We have identified some rice mutants that have tolerance. These are being screened in field trials by ICAR (Indian Council of Agricultural Research) at eight hotspot locations. The genes from wild rice varieties which have resistance have been transferred into cultivated rice. All of them are being tested together. This year after two years of testing, we hope to whittle down the eight into maybe two or three. These then go for yield trials.  A rice variety must not only have tolerance but also good yield and eating quality for farmers to accept it. .

In this process we got some rice lines that have very high yield and lines that have strong stem or culm, so that the rice plant does not lodge particularly in coastal areas, which are cyclone prone. All of these we are trying to map. We have got some mutants that have longer grains. They are not as long as Basmati but longer than Samba Mahsuri. They have commercial value. Those also we are mapping.

I feel today, particularly in rice, we are in a very, very fortunate situation. Not only in rice, but in all crops.  The kinds of tools that are becoming available to breeders to be able to develop newer varieties is expanding. One is genome editing method and it is very powerful. It is a method of transgenesis but you do not add a gene, you modify an existing one. The second method is the kind of work we are doing where you generate varieties though mutagenesis. It is not transgenic. It is genetic intervention through mutagenesis. When you get a DNA marker that is linked to it that is when it becomes biotechnological. With advances in genomics there are schemes by which you can quickly map those mutations, develop DNA markers.

Developing DNA markers is a job in itself.  You have to first identify where in the genome they are. Once you do the mutagenesis there are many sites that will be affected. The important ones have to be identified.

The way they show up is that you have to take the population and if it is bacterial blight you have to individually inoculate each line and check to see if that has resistance. It is back-breaking work because it has to be done manually.

For bacterial blight we had about 10,000 original mutant lines. We have screened about 4,000 and we have got 8-10 that are resistant to bacterial blight. For sheath blight we have four to five resistant lines and for yellow stem borer, eight lines. We also have lines that are 50 percent more higher yielding than Samba Mahsuri (which yields about 5 tonnes per hectare).

At CCMB we are focusing on non-transgenic approaches because the route to the market is faster. That is the same reason why we have extended marker-assisted selection to traits. This is one approach. I cannot say it will work because the mutagenesis process is random. And it generates a lot of variation. You are not guaranteed success. We should try this approach and also the transgenic one.  Whichever works best, take it.  We are not opposed to transgenics per se.

We have licensed Improved Samba Mahsuri to Metahelix Life Sciences, which will start distributing it from Kharif 2017.

(Top photo of Ramesh Sonti at the Centre for Cellular and Molecular Biology, Hyderabad. By Vivian Fernandes).