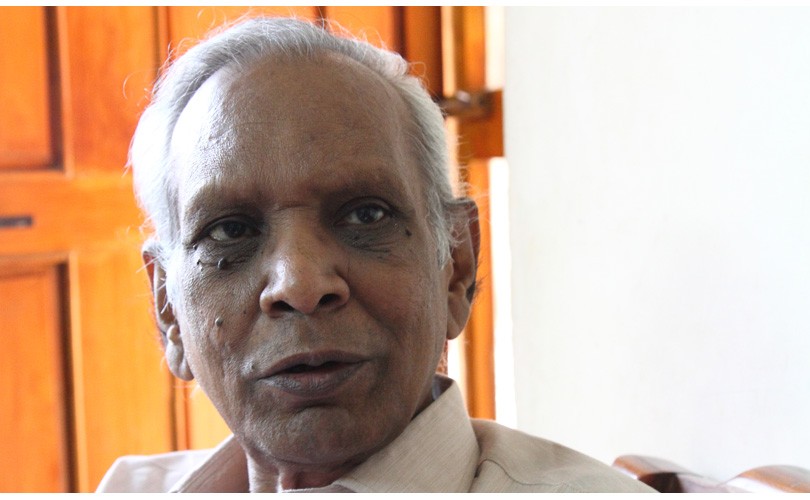 E A Siddiq, 80, was involved in the development of 14 high-yielding rice varieties including DRRH1, India’s first hybrid rice, released in 1995. In 1989, his team released the first high-yielding dwarf basmati variety which boosted India’s basmati rice exports. Its variants continue to do so. Pusa 44 has sustained the rice-wheat cycle in northwest India. It is a sturdy high-yielding plant which can be machine harvested. Pusa-2-21 is a quick-maturing high-yielding variety that has enabled crop intensification and diversification. Vivian Fernandes met the rice breeder in Hyderabad. Here is his story.

Basmati rice used to get a high price in the domestic and export markets. At one time, it went beyond $1,200 a tonne as against even the best non-basmati varieties like Thailand’s jasmine rice which fetched $250-300 a tonne.

But basmati yield was around 1.5 to 2 tonnes per hectare as against 5-7 tonnes per ha of high-yielding non-basmati varieties like IR8 and Jaya. Farmers in traditional basmati-growing areas in Punjab, Haryana and western Uttar Pradesh in India, and Pakistan were making more money from high-yielding common rice. As a result area under basmati was shrinking. The trend was reversed after the release of high-yielding dwarf basmati in 1989.

(Looking back in 2015 on the occasion of 25 years of the Green Revolution, Siddiq wrote: “Realizing that unless traditional basmati rice is made high yielding, there will be no way to conserve this unique germplasm and take advantage of its export prospects, IARI initiated an exclusive breeding programme to combine basmati quality in high yielding dwarf plant type background. We did not realise that the task would be so challenging, given the genetically very complex nature of the key traits that make basmati quality.”)

I was a senior scientist at IARI. I joined Indian Agricultural Research Institute (IARI) in 1962 as a student of M S Swaminathan (known as the Father of the Green Revolution).  I thought if we shorten the height of traditional tall basmati varieties so they do not lodge, and also make them fertilizer responsive like dwarf high-yielding common rice, we will be able to increase yield. We worked for almost 24 years to evolve the first semi-dwarf high-yielding basmati variety. It was called Pusa Basmati-1.

(Released for commercial planting in 1989, it produced 4.5 tonnes per ha. Reminiscing, Siddiq wrote: “In the long course of its development, disappointment after disappointment at every stage and discouraging comments from higher-ups never dampened our spirit and determination to achieve the goal. The moment we achieved what we had been chasing for so long we forgot all the hassles we passed through.”)

In the long process of development, we could combine all characteristics except kernel elongation on cooking which is unique to basmati.  Other rice varieties swell.  Till then rice breeders had not paid attention to cooking and eating quality. Their focus was on yield, aroma and slender grain. We had to combine six or seven characteristics including high yield. Among the key traits, the physico-chemical properties of starch are most important. Starch has two fractions: amylose and amylopectin. In all our varieties the amylose content is in the range of 28-30 percent. In basmati the fraction should be around 22 percent. The rest is amylopectin. Gelatinization temperature should be medium and gel consistency medium-to-low for cooked rice to be soft in texture.

Aroma is an inherited trait. It is not difficult to combine. Kernel elongation is the most complex and difficult trait to combine.  We do not know how it happens. It may be due to the still not understood physico-chemical properties of starch. The kernel must be extra long slender with length-to-breadth ratio above 2.5.

Rice is a versatile species adapted to varied agro-ecologies. Following T(N)1, the miracle yielder IR8 was developed by the International Rice Research Institute. It as introduced in India in 1965.  It was ideal for irrigated ecologies. But rice is grown in India and Bangladesh under varied conditions from lowland (deep water, semi-deep water and shallow water) to uplands. Almost 55 percent of our rice area is rainfed and around 15 percent of it is in upland drought-prone ecologies. Eastern India is totally rainfed  but receives abundant rain. India needs high-yielding varieties for various water regimes, long and short seasons and diverse cropping systems.

With this in view, we started breeding early-maturing high-yielding varieties that would help intensify and diversify agriculture. The first product of this effort was Pusa 2-21, which matures in 100 days. It was released for planting in several states in different names. In Tamil Nadu it was released as Kannagi. That saved the short season kuruvai crop in the Cauvery delta. It has been found to yield in 100 days as much as 80 percent of  the output of IR8, which matures in 140 days. Where the season is warm and water is available, as in peninsular and eastern India, it has enabled farmers to take 2-3 crops a year.

Our third major contribution, relevant again for northwestern India, was to the sustenance of the rice-wheat system. Delayed planting of wheat was affecting the rotation. The rice harvest season had to be shortened, which was not possible if cutting was done manually. For machines to be deployed the rice plant had to be sturdy and non-lodging, A variety called Pusa 44 was developed. It had plant properties suitable for combine harvesting.

By 2050, we will have to produce 180 million tonnes of rice from 110 million tonnes now. Our needs of the next 10 years can be met by tapping the unexploited yield potential of existing varieties. We are not harvesting on average about 50 percent of the harvestable yield which is about 7-8 tonnes as against the potential yield of 10 tonnes per ha.  In Punjab, Haryana and western UP, the yield is 6.5-7 tonnes per ha. In Bihar it is less than 5 tonnes.  We can get higher yields with timely planting, use of best varieties and proper water and nutrient management.

But to meet the requirements of 20-25 years hence, we will have to raise the genetic yield level of high-yielding drawf varieties. The potential yield of 10 tonnes per ha, possible through dwarf high yielding varieties must be raised by another 25 percent. China has achieved this with hybrid rice. We began hybrid rice breeding in 1990 and came up with marketable hybrids. Though they yield 10-15 percent more than dwarf varieties they have not spread as expected. Research effort is underway to correct their deficiencies.

Meeting the target of 180 million tonnes by 2050 will not be difficult given the way technology is evolving. But it has to be sustainable economically and ecologically. We will have to use less water, less nutrients and less pesticides. Climate change and the demands on natural resources will not make the task easier. We need innovative technologies to meet the goal.

Transgenics, which use less water and nutrients are being developed.  Mahyco (a company based in Jalna, Maharashtra), for instance, is testing rice varieties which are efficient in use of water and nitrogen.

Do I support transgenic technology? See, when a man is dying without food, if you give some food through some means, he will thankfully accept it.  Many people ask me whether I am for transgenics. Yes I am provided it is proved that they do not have any health-related risk or pose a threat to the environment.  It may be the need of the hour.  Caution is important but I am not against the technology.

(This story was revised on 1 March in the light of changes suggested by the interviewee).

(Top photo of E A Siddiq at his house in Hyderabad. Photo by Vivian Fernandes)