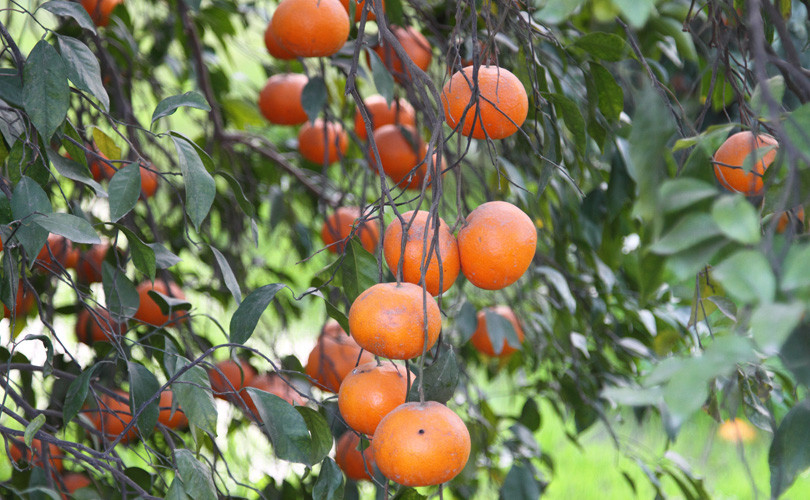 An expert group in a 2013 report had advised provision of drainages and lining the canals to check seepage, failing which the region could become a desert over time, reports Vivian Fernandes, after a visit to the area. This report was also published as a column in the Financial Express (link below).

We are having kadhi, a lightly-spiced curry of beaten curd thickened with besan or gram flour, and my Bagri-speaking host tells me that for many kilometres around it is an essential accompaniment at dinner, a romanticised, perhaps even exaggerated, reminder of the days when water was scarce, like the Jewish ritual of eating unleavened bread at a Passover meal.

Ajay Vir Jakhar, Chairman of Bharat Krishak Samaj, owns a kinnow orchard and a nursery. His grandfather, the late Balram Jakhar was among the first to grow kinnow. Photo by Vivian Fernandes.

The house is a single-storey sprawl of rooms on three sides with a covered courtyard, where rotis as baked on wood fire in an expansive kitchen. The host says the layout is the same as it was when built in the mid-sixties, but a black and white photo in the visitors’ rooms shows much has changed around it. Scrub and sand in the foreground suggests why the Indian Council of Agricultural Research (ICAR) worked on adapting imported date palm varieties at its local fruit research station between 1955 and 1962.

We are in Panjkosi village in south-west Punjab’s Abohar tehsil, which along with Fazilka,  were to be transferred to Haryana in exchange for Chandigarh as capital of Punjab  ─  a contested swap under the 1985 Rajiv-Longowal accord that never too place.

Sixty years ago, it would have been hard to imagine this area as Punjab’s citrus garden. Fazilka district, carved out of Ferozepur in 2011, of which Abohar is one of three tehsils, accounts for fifty five cent of the state’s area under kinnow, which in turn accounts for 62 percent of Punjab’s fruit acreage.

Kinnow is a cross between ‘King’ and ‘Willow Leaf’ mandarins, and the name is a play on their syllables. It was developed in 1915 at a California research station and released in 1935. It was introduced in India in 1959 by J C Bakshi of Abohar’s fruit research station. The station had been set up as a citrus nursery in 1946 and had become the centre in 1954 for ICAR’s countrywide scheme on date palm improvement . Bakshi was sent to California to get date palm saplings but returned also with budwood of fifty citrus varieties for grafting.  Kinnow was found to be the most promising and was recommended for commercial cultivation after more than a decade of trials, says G C Chauhan, 81, who assisted Bakshi at the research station and retired in 1995 as its director. By then the research centre had been handed over to Punjab Agricultural University. Among the first to grow kinnows was my host’s grandfather, Balram Jakhar, a progressive farmer, who later became agriculture minister and Lok Sabha speaker and died, aged 92, in the first week of February.

The orchards quickly took root in the sandy loams irrigated by canal water and advanced over flattened dunes and filled-up depressions, like Indian army tanks rumbling in the 1965 war across the border which Fazilka district shares with Pakistan.  As one drove through Abohar town to kinnow merchant and grower, Arvind Setia’s three decades old citrus farm off the highway to Sriganganar, one could see cotton mills and ginning units that has been forced shut by thriving horticulture.

Water logged field in Abohar, off the highway to Sriganganagar. Photo by Vivian Fernandes.

But just when the Russia’s market is opening up following Turkey’s shooting down of its military aircraft, and new kinnow acreages are blooming in Haryana, Rajasthan and even Andhra Pradesh (to meet off-season demand), Setia is anxious whether the fruit which lifted his fortunes and helped him graduate from a farmer to a merchant will continue to shore up his prosperity.

Paradoxically for Punjab, where groundwater depletion is a serious affliction and water is pumped out faster than the rate of recharge in 110 of 138 blocks prompting diversification out of rice to maize and horticulture, the Abohar area is threatened with water-logging. It is the consequence of excessive irrigation and seepage from the Rajasthan and Sirhind canals. Seventy percent of south-west Punjab is canal irrigated.

An area is defined as water-logged if the water table is two meters below the surface, and is potentially so if the depth of water varies between two and three meters.  Water-saturated soil deprives roots of oxygen and chokes them with carbon dioxide. Salts prevent absorption of nutrients. For kinnows, the water level must be below six feet or two meters, says Parshottam Kumar Arora, director of the Abohar research station. Arid soils are rich in salts which rise to the surface due to evaporation. Kinnows cannot tolerate saline soils.

Arvind Setia has been growing kinnows for three decades. He has transited to trading under his own brand name. Photo by Vivian Fernandes.

A Planning Commission appointed expert group which studied the problem in 2013 said in blocks like Khuiyan Sarwar, the water table had risen from 17 meters below ground level (bgl) in the 1970s to five meters bgl in 2003 and was rising. Arora says a relative was so aghast at finding ground water gushing like a fountain from a disused tube well at his farm there, that he invited him to see it.

The expert group had advised provision of drainages and lining the canals to check seepage, failing which the region could become a desert over time.

Ribbed bumps on stretches off the highway to Sriganganagar are proof of the sloshing of mud under the surface under the impact of heavy truck movement. In many fields off the highway, one could see stagnant water, and trees with yellowing leaves or without foliage, indicating various stages of decay.

Land prices have eroded and even halved from Rs 30 lakh an acre a few years ago, says Sant Ram, a retired horticultural officer.

‘Water-logging is a big threat,’ says Asit Kumar, who has a 150-acre kinnow orchard at Waryam Khera, about 20 km from Abohar town.  He believes a drain built to take out excess water is itself contributing to the problem because of improper gradient.

Punjab’s increasing acreage under horticulture perhaps conceals the situation in Abohar. Ajay Vir Jakhar, chairman of Bharat Krishak Samaj, himself a large kinnow grower, believes the government is overestimating the diversification out of cereals. He suspects it is not subtracting orchards that are uprooted in the Abohar area because of water-logging.

For Sanjev Nagpal of Sampurn Agri Venture, water-logging is a business opportunity. He has set up a plant at Fazilka for converting paddy straw, which is otherwise burned, into manure through anaerobic digestion. He says the manure is rich in orthosilicic acid. Silicon is essential for plant cell formation. Paddy straw has a high content of silica; the reason cattle do not like it.

The digestion process requires huge quantities of water. Punjab, Nagpal says, produces 20 million tonnes of paddy straw a year.  He first desalinates the water by breeding shrimp (for export to Dubai) in a huge pond.  The shrimps absorb calcium carbonate (for shell formation) and the scrubbed water is used to ferment the straw. Gas, rich in methane, is a by-product which can be a cooking, auto or boiler fuel. Nagpal says the Haryana government has contracted to  buy his entire production of manure for free supply to farmers.

Several such plants will have to be established to drain out the excess water. But the soils will still be contaminated with salts and heavy metals. Even if the economics are compelling, prevention of seepage from canals and judicious use of water would be a better option.

You may also wish to read how kinnow growers can avoid selling cheap because of a glut caused by the fruit’s short harvesting season (mid-December to end-February). Duri Raber, an Israeli expert at the Indo-Israeli Centre of Excellence for Fruits (Citrus) at village Khanaura in Hoshiarpur district tells Indian Express‘s Anju Agnihotri Chaba that they must grow a variety of citruses with staggered harvest times.

(Top photo by Vivian Fernandes of a bunch of kinnows in an orchard in Abohar, on 27 January, 2016).