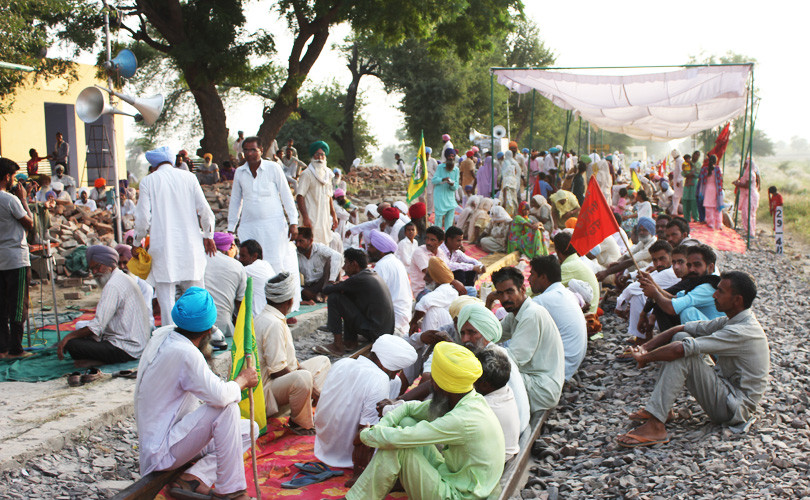 The virulence of the white fly oubreak in the Malwa region of Punjab shows poor anticipation on the part of the government, reports Vivian Fernandes. This piece first appeared in Financial Express as a column called ‘Chlorophile’ by the same reporter.

At Pathrala railway station on the Bhatinda-Bikaner line farmers are squatting on carpet-covered tracks under white canopies. It is Day 5 of their ‘rail roko’ agitation. The mood is sombre. The sacrifices of Sikh gurus is invoked, the Jallianwala massacre is recalled. It is evening, and is passed around on slips of newspaper. There is camaraderie born of common suffering. Similar scenes were reported at Rampura on the Bhatinda-Ambala line and Shergarh on the Bhatinda-Mansa line.

The agitation was called off on the seventh day.  The protesters were unable to get the government to improve upon its offering of Rs 8,000 an acre to farmers, and Rs 800 for farm labourers. This will provide relief but not compensate for costs incurred and cotton crop lost to the white fly.

As one drives from Rohtak in Haryana to Bhatinda in Punjab, and onwards to Abohar and Fazilka districts, the devastation becomes visible at first glance.   Green fields have blotches of dirty brown as if caustic alkali has drizzled on them. Shrivelled speckles of white from burst cotton bolls on stunted plants point to the damage wreaked by the sap-sucking pest.

‘I believe this is an attempt to grab land and give it to companies,’ says Balwant Singh, 50,

Balwant Singh sees a land gran conspiracy. The cotton crop behind is that of Amandeep Dhillon. Photo by Vivian Fernandes.

who grew cotton on five acres and moongbean on another five acres in Kaljharani. ‘This is a conspiracy to force us off our farms.’  Such paranoia is understandable because cotton prices were low last year, potato prices crashed earlier this year due to a glut, sugar mills have defaulted on cane arrears and basmati rice is selling at a discount to even common rice.

Kaljharani adjoins Badal, the village of the Punjab chief minister. Singh says he sprayed the cotton crop six times, including with a new molecule which the government supplied at half the price. Singh was unable to save either his cotton or moongbean crop.

Amandeep Dhillon. Her cotton crop was not a pretty picture. Photo courtesy A. Dhillon.

Amandeep Dhillon, of the same village, has a similar story. Of eighty acres, she sowed forty with cotton.  White fly infestation is not new, said the English-speaking, hands-on lady farmer, but ‘this year it has been uncontrollable.’ Her crop was healthy till August. Suddenly the rapidly-multiplying pest was all over. She had the crop sprayed with water in the morning to wash off the waste left by the flies on the leaves, to aid photosynthesis, and treated with chemicals in the evening. She tried the government-supplied stuff and other recommended potions. She even went organic with neem oil.  There was no effect.  She expects a picking of 2.5 quintals an acre, against last year’s eight quintals.  Her crop of guar, whose prices have fallen in sympathy with crude oil, has also been damaged by the pest.

Anuj Kajla, 22, of Panjkosi, former speaker and agriculture minister Balram Jakhar’s village, has lost 45 acres of cotton. He says he sprayed various chemicals nine times singly and in combination, spending Rs 6,500 an acre. The crop is a washout.

His neighbour, Surender Sharma, grew cotton on 15 acres, all leased at an annual rental of Rs 30,000 an acre contracted on credit from the arhatiya at a monthly interest rate of two percent.  He has ploughed under eight acres of the crop not wanting to waste money on picking. Of the remaining seven acres, which he considers ‘good,’ he expects to harvest about one quintal an acre against eight to ten quintals last year.

The plight of farm workers, usually ignored, is worse. Kaushalya Devi, who was picking cotton on Sharma’s field, had managed just ten kg the whole day when she would have been doing nearly ten times as much. Her rate – Rs 5 a kg has not changed despite the effort involved in picking a lean crop because there is so little work available and growers themselves are hard up.

At Pathrala, Sita Devi, a class eight student of the Bagariya tribe, is picking cotton on a government holiday. When told that she is under-age and should not be working, she says, ‘we have to do something to be able to eat.’  She has to struggle because cotton is so sparse. The land owners, she says, will get official relief; labourers will have to fend for themselves.

For the government this is a crisis to be managed with minimal damage to its prospects in the next elections. University scientists, extension officials and private pesticide suppliers all claim to have played their part responsibly.

Where is the cotton to pick? Cotton pickers off the highway at Pathrala in Bhatinda. Sita Devi is third from left. Photo by Vivian Fernandes

‘Weather was most favourable this year’ for the white fly outbreak says Paramjit Singh, Director of Punjab Agricultural University’s regional research station at Bhatinda. White flies emerged in the second half of June, about two months earlier than usual because of humidity and day temperatures of less than 40 degrees centigrade. Late cotton sowing due to delayed wheat cutting made young plants vulnerable. The university recommended five cotton hybrids, he says, and four kinds of sprays, but most farmers may not have heeded the advice.  They were told to spray when the number of adult male whiteflies exceeded the ‘economic threshold limit’ of six per leaf. According to Singh’s assessment ‘40-50 percent’ of the crop is damaged ─ it is obviously an under-estimate. The cotton crop at the station’s campus itself does not look healthy, though Singh insists it is.

Among the pesticide companies, Bayer brand value seems to have suffered. The government bought 92,200 litres of Oberon, a new molecule which Bayer CropScience introduced in India in 2013, and sold it with fifty percent subsidy. The farmers this correspondent spoke to found the chemical to be ineffective. Bayer says the quantity which the government bought would have covered just 23 percent of Punjab’s cotton acreage. Its ‘assessment’ is that ‘a majority of farmers’ who sprayed it ‘in the right window’ according to ‘recommended usage guidelines’ would be ‘satisfied with the product.’  Bayer says whitefly nymphs cause the most damage; by the time farmers notice the adults it would be ‘too late to control the pest.’

There is speculation (unverified) that the pesticide which the government supplied may have been adulterated. If so, the adulteration may have happened after the chemical left the manufacturer’s premises because companies with reputations to protect would not risk losing farmers’ trust. The state director of agriculture, Mangal Singh Sandhu, was removed from his post, and upon obtaining a stay from the high court, arrested for alleged corruption. But what explains the failure of the crop in Haryana? Given the virulence of the pest and the desperation of farmers a surge in scruple-less sales can be expected but can the entire stock across the state be spurious?

The whitefly outbreak has given a shot in the arm to those opposed to genetically engineered crops. They are pointing fingers at Bt cotton, though the Bt gene targets only bollworms and not sucking pests. Dhillon says non-Bt cotton which she planted around the field for bollworms to feed on (so that they do not develop resistance to the Bt gene through natural selection) had been unaffected by white flies.  This calls for investigation by seed companies.  Scientist M S Swaminathan believes, based on his Green Revolution experience with dwarf varieties of wheat, that when a dominant pest (bollworm) is controlled, lesser ones try to move in.

Former finance minister Manpreet Singh Badal says the handling of the white fly attack points to a disease. ‘It is a symptom of corruption, poor governance and weak leadership.’ Badal had fallen out with his chief minister uncle in 2010 for voicing concerns about the state’s debt problem. He presides over his own party.

The Punjab farmer is lurching from one crisis to another. They have to negotiate volatile prices and uncertain weather. The government is the third risk factor they have to reckon with.

In an Indian Express report Kranthi says Bt cotton hybrids not to blame for whitefly attack. He obliquely blames the Genetic Engineering Appraisal (formerly Approval) Committee for approving Bt hybrids that are susceptible to the whitefly and leaf curl virus. See that story here.