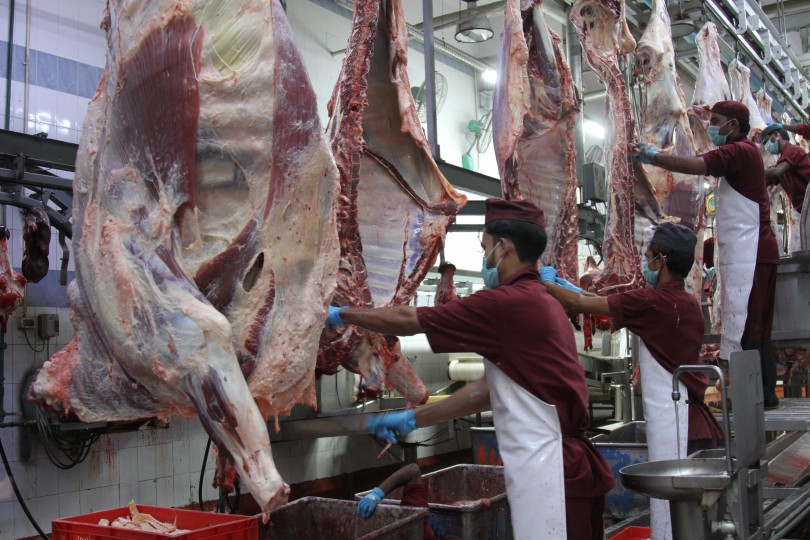 As police officials and cow vigilantes use the drive against illegal slaughter as a pretext to extort, the line between law enforcers and law breakers has blurred, reports Vivian Fernandes

The Uttar Pradesh government’s drive against illegal slaughter of buffaloes and goats has itself slipped into illegality with police officials and vigilantes using it as a pretext to extort money with little fear of accountability.

There was hardly a buffalo supplier at Allanasons’ export-oriented abattoir and frozen meat facility in Aligarh who had not faced harassment from state police officials or alleged Bajrang Dal activists, when this correspondent met them on Saturday, 15 April. Often the two acted in concert, they said, blurring the divide between law enforcers and law breakers.

March at Raya railway crossing near Mathura while transporting buffaloes from Bharatpur in Rajasthan to Aligarh, despite having valid papers. They released the animals on payment of Rs 50,000, which he had to fetch from his house in Mawan village. The truck is still seized. Qayyum called up Pooran Prakash, the helpful BJP MLA from Baldev assembly constituency but the station house officer declined to speak to him. “There are a lot of complaints against the police at Raya,” he said.

On the same night, Mohammed Shoaib said eleven of his buffaloes were seized by police at Raya despite him producing a supplier’s certificate from Allana.  “Keep the permit in your pocket,” they told him, demanding Rs 50,000.  Before the change of government, police used to settle for much less, he said.

Mohammed Naushad recounted how, a fortnight ago, he was intercepted by police officials at about two in the afternoon on Agra road. He was transporting 10 buffaloes from Ganganpur penth (animal bazaar).  Police were not satisfied with Rs 200 he gave them. He fled to the nearby field when told to proceed to the police station, fearing they would beat him. “The driver touched their feet.” The two were let off after paying Rs 4,300. This was in the jurisdiction of Pilua police station. In another incident, Naushad said, he paid Rs 65,000. The animals were released but the truck has not been.

Gola Qureshi had parted with Rs 1,000 to police at Raya railway crossing, the day we met him. The officials were assisted by bikers from the Bajrang Dal, he said. He had a receipt from Mathura’s Laxmi Nagar penth attesting to the purchase of 16 buffaloes. Police invite  village folk to take the buffaloes away, if the bribe is not paid, Qureshi said. It is better to lose some money than animals worth Rs 3-4 lakh. “Their intention is to finish off the Qureshi community (the Muslim sect traditionally engaged in the meat trade).”

Such incidents are “seldom known” in Aligarh, said Additional District Magistrate S B Singh, “but are being monitored by us.”  The district administration has “directed thanas and police officials that no person can wrongly interfere in lawful transport of animals. But they must keep vigil on mode of transportation so there is no cruelty of animals,” Singh said carefully choosing his words.

The freelance slaughtering of animals that used to happen in congested neighbourhoods has almost stopped with Hindutva hardliner chief minister, Yogi Adityanath, striking fear in them. The activity is “illegal” but what recourse do butchers have when the city’s only municipal slaughterhouse has been closed since January 2014 for failing to meet pollution control norms?

“There is no shortage of flesh (meat) in the city as there are alternate arrangements,” said Singh. To ensure people are not deprived of the less expensive meat, the district administration headed by Hrishkesh Bhaskar Yashod has asked the Allana and Al Dua meat plants to supply to city shops and the kitchens of Aligarh Muslim University.

The shops have to comply with norms before their licenses are renewed. Mohammed Rashid, who has a hole in the wall at Turkman Gate is installing aluminium framed glass windows. He closed the shop “out of fear” after the Yogi administration took over.

According to Tariq Anwer, a supplier of buffaloes and raw hides and President of Aligarh Jamiat-ul Quresh Meat Association, the district has 351 buffalo meat shops of which 233 were licensed last year. Singh says the licenses of 136 have been renewed so far.

There is no doubt that health and sanitation were of little concern to the domestic meat trade. They could browbeat the previous Samajwadi Party government, which gets support from Muslims, into not enforcing the law. Some traders blamed Azam Khan, a former minster, for playing politics with them during a recent meeting with Chief Minister Yogi Adityanath.

But the government itself is a violator. Before it was closed down, blood from Aligarh’s municipal slaughter house used to be let off into a drain. (Bones and offal were processed at private rendering plants). Freelance butchers offloaded offal at a nearby dump. Little or no slaughter has taken place over the past two weeks, yet stench from decaying flesh was overpowering at the slaughter house.

The contrast with the Allana meat plant is stark. About 2,000 animals are cut there (less now) but both the wet and dry areas are neat, clean and disinfected. The only giveaway is smell from the rendering plant where blood, bones and offal are treated with heated steam.

Adityanath’s drive has jolted UP’s meat trade into realizing that it must clean up its act. The Aligarh administration has gone into fast forward. Work has resumed at the slaughter house’s effluent treatment plant. The contract was given two years ago. The facility should have been ready in six months, says Harishchandra, munshi or supervisor for a lapsed slaughterhouse contractor. Waste will be treated, as before, at a private rendering facility, till one is built at the site.

Why has the government singled out the meat trade for compliances? asks Anwar? Do halwais and eating joints meet food safety standards? If people are deprived of their staple food, aakrosh or anger will arise in them, he says.

“If livelihood is stolen from us, people will take to wrong ways,” says Rashid.

District collectors will have to be sensitive to the hardship of the Muslim community and its sense of being targeted Career-minded who see advancement in toeing the Hindutva line or those with a communal mindset can do “legally unconstitutional” acts (like depriving livelihood) through inaction, as the Lucknow Bench of the Allahabad High Court observed while hearing the writ petition of a goat meat seller whose license was not renewed by the municipal corporation of Lakhimpur Kheri.