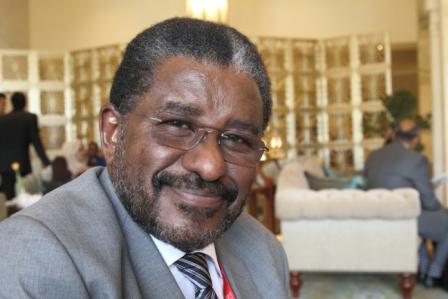 Solar pumps are a “magical product” says Sirajuddin Hamid Yousif, the ambassador of Sudan, which is turning its attention to agriculture to rebuild its economy after the secession of South Sudan and the loss of oil fields in 2011. Yousif was speaking at the Exim Bank Africa Conclave organised by industry chamber CII in Delhi. 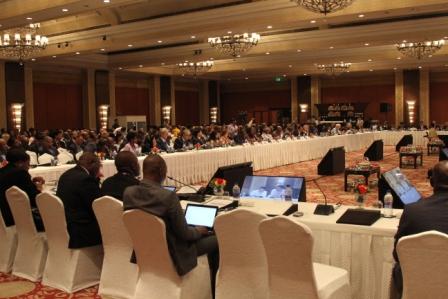 The country wants to buy 15,000 solar pumps over the next five years to irrigate that part which is rainfed, where agriculture is a single-season activity, dependent on rains. But dry Kardofan and Darfur, which shot into notoriety over the genocide of non-Arabs, can be irrigated with groundwater, which is in abundance, extracted with solar pumps and a second crop of wheat harvested in the winter months. These regions also have poor access to grid-supplied electricity. The ambassador is impressed with a 10-horsepower solar pump, which he saw at work in Indore.

Sudan is the fourth largest country by area in Africa with nearly 1.9 million hectares, even after the loss of its southern provinces. The White Nile and the Blue Nile irrigate a third of the country. Wheat productivity in fertile river valleys is high. (In neighbouring Egypt it is 6.5 tonnes per ha compared to Punjab’s 4.6 tonnes and India’s average of 3.09 tonnes).

As co-founder of the International Solar Alliance along with France, India has provided a $2 billion line of credit for solar projects in Africa through the Exim Bank, but there are few takers for it because of high India-content conditions. For Sudan there was another impediment: until last October, it faced US sanctions imposed in the wake of the massacres in Darfur.

The 10 hp solar pump costs Rs 2.4 lakh or about $3,750, which Yousif says is “affordable” if subsidized by the Sudanese government. He thinks prices can come down with large orders.

Sudan also has Africa’s largest population of cattle, sheep, goats and camels. It exports live animals to countries like Saudi Arabia. If abattoirs were set up in the country, meat could be produced and exported. This will not only add value but also create jobs.

Agriculture in other African countries is not as neglected as in Sudan, but in general is low in productivity, lacks access to infrastructure and markets, depends on expensive imported inputs and is vulnerable to climate change.

While these present opportunities for Indian investors, the government also needs to be more actively engaged. At the Indo-African Forum Summit in 2016, it was decided to set up a pan-African agricultural university. There is yet no fix on where it will be located, though initially eastern Nigeria was chosen.

India has also increased the number of agricultural fellowships for post-graduate and doctoral studies to five hundred for the five years to 2020. In the previous five years, 195 fellows were trained in India, R K Jain, Dean and Joint Director (Education) at Indian Agricultural Research Institute said. Uganda’ Minister of State for Cooperatives, Michael Werikhe said the country needed extension services and called upon India to train the trainers.

India perhaps should so beyond conventional support programmes like short duration course in agriculture and testing centres for seeds, water and soil.

The African Orphan Crops Consortium (AOCC) and the African Plant Breeding Academy, both of which are based in Nairobi, are focussing on so-called orphan crops. These are crops that are nutritious, resilient and native to Africa but have seen little innovation, unlike “imperial” crops like rice, wheat and maize, into which much of the agricultural research dollars flow.

AOCC intends to “sequence, assemble and annotate” the genomes of 101traditional African food crops and put them out in the public domain so that varieties with higher nutritional content can be bred. The first crop to be sequenced was finger millet or ragi. Other crops include yams, drumstick or moringa, jujubes or ber, passion fruit, baobab, jackfruit, okra and sweet potato leaves.

AOCC founding spirit, according to the Economist, is Howard Yana-Shapiro, Chief Agricultural Officer of Mars Inc, the American confectionery company, known for chocolate brands like Snickers. Other partners include World Agroforestry Centre, the University of California Davis and the African Development Agency, Nepad.

AOCC’s plant breeding academy will train the continent’s breeders in advanced techniques, including the use of DNA markers.

In 2010, Mars completed the sequencing of the cocoa genome and put it out in the public domain. It was a collaborative effort involving three US universities, a pharma major, IBM and the United State Department of Agriculture. Raising the productivity of the cocoa plant would not only give more income to the 6.5 million farmers of Cote D’Ivore (Ivory Coast), Mars’s main source, but also make its cultivation sustainable. At 450 kg per hectare it would require about 5 million hectares to produce 2 million tonne of cocoa a year. If the yield were raised to 660 kg per ha, the area required would shrink to 3 million ha and if it rose to 2 tonnes per ha, only 1 million ha would be needed. So much less rainforest would need to be cut, Yana-Shapiro said.

How about ICAR and India’s philanthroper-investors taking up the challenge? Many of the orphan crops are grown in India as well, as it shares the same tropical climate with much of Africa. India has benefited from international collaborative research. It is time to pass on the kindness.