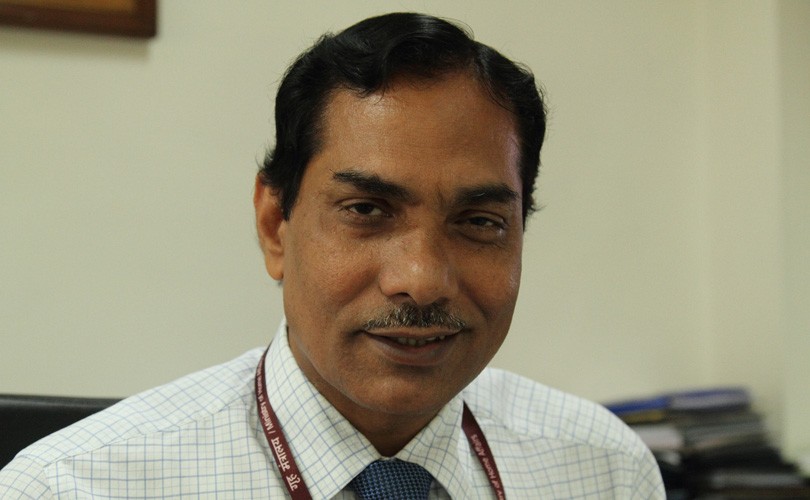 Dr. Trilochan Mohapatra took over as Secretary, Department of Agricultural Research and Education and Director-General, Indian Council of Agricultural Research (ICAR) in February. A molecular geneticist, he is known for developing the first high-yielding basmati rice variety resistant to bacterial leaf blight and for genome sequencing of rice and tomato. Here is a lightly-edited (and annotated) interview with Vivian Fernandes. This interview was first published in the Financial Express.

Q: With weather getting more erratic and India’s population set to increase further, how is the ICAR preparing for food and nutrition security?

TM: Agriculture contributes to greenhouse gas emissions, particularly low-land rice. It emits methane (which is much more earth-warming than carbon dioxide).  Direct seeded rice (without transplantation) and System of Rice Intensification (SRI) can help reduce these emissions. But these cannot be applied in every situation as rice is cultivated in a variety of ecologies from upland to deep water. Even with rice-wheat system in the Indo-Gangetic Plain (IGP), where there is no water stagnation, we have to reduce emissions.

Through conservation agriculture? (This is no-tillage agriculture where stubble and straw are left in the fields and not burnt, wheat and rice and sown by parting them with seed drills and a third, short duration crop of mungbean is taken to enrich the soil with nitrogen from the air).

With conservation agriculture you retain soil moisture, sequester carbon in the soil instead of putting it in the atmosphere (as smoke and soot) and reduce the use of chemical fertilizers.

We can have C4 crops like maize, sorghum and sugarcane which are more efficient in photosynthesis than rice and wheat. But there are research efforts to bring C4 photosynthesis to rice as well. It is one of the areas ICAR is focusing on. There are several institutions which are engaged in changing the anatomy of the rice plant to increase the concentration of carbon dioxide in the tissue so more photosynthesis can take place.

But the regulatory environment is not favourable?

At this point, yes, we have limitations but as we are moving to overcome them. Science should not stop. When it comes to commercialization one can see what best can be done. But this is at the concept validation stage. The experiments should continue.

ICAR was at the forefront of the Green Revolution. It is missing in action in the Gene Revolution.

Not exactly. The activities are going on. There is need to improve efficiency and speed. There are many laboratories which are involved in validation of gene functions. But the public system cannot match private companies in funding, infrastructure and the critical mass of people focused on a project.

What are the ICAR’s focus areas in agri-biotech?

We are testing genes for C4 photosynthesis in rice. We are trying to improve nitrogen use efficiency (a) through nitrogen-fixing bacteria (b) plant and rhizobia interaction, and (c) by manipulating host genetic mechanisms. With regard to phosphorus use efficiency, the genes and markers are available and we are doing breeding. We have very good success.

ICAR has 103 institutes. Why can’t it focus on a few critical crops like, say, pulses?

In pulses the problem of pod borer is serious. We have a focused programme on GM pulses where we can use the Bt genes which has been proven safe in cotton (against the bollworm).  We are making tur resistant to pod borers. The Indian Institute of Pulses Research Kanpur, has identified 6-7 events (mutated transgenic cells).  Event selection (for the best) will happen next. In three to four years we should be able to deliver it to the farmers if the regulatory system approves.

Political leaders are wary of GM technology because they see it as the preserve of private companies. If ICAR gets into the field, there will be less resistance.

Delhi University (South Campus) has created transgenic mustard with NDDB (National Dairy Development Board) funding. It has gone through all the tests. It is a product of the public system. The bio-safety dossier is ready. Once it is placed in the public domain and comments come, GEAC (Genetic Engineering Appraisal Committee) will probably take a final call. That should happen ideally before the coming mustard sowing season in October.

Hybrid vigour in it is proven?

More than 20 percent heterosis (yield enhancement) they have recorded. But I am not really worried by heterosis in this particular hybrid (Dhara Mustard Hybrid 11) as we can back-cross and generate better ones if this seed is deregulated and allowed for cultivation. This has happened in (Bt) cotton. More than 1,500 hybrids have been released in ten years. It is a record for India. Public and private can join and create newer combinations.

You told reporters recently there should be public private partnerships (PPPs) in research. Can you elaborate?

We need PPPs in bio-tech and for seed multiplication. Gone are the days when the public system could meet all the seed need of the country. Today, the National Seed Corporation and state seed corporations cannot supply enough because the seed replacement rates are increasing. Some farmers want to change them every year.

The second area is having partnerships for GM research…partnering with multinationals, if they can put in money and we can do research together to solve a particular problem.

It happened in Bt brinjal.

there the event was provided (by Mahyco India) and it was backcrossed.  It was not at the stage of gene discovery.

Political leaders are reluctant to allow private companies to charge for plant traits (though farmers do not mind paying for them). In May the agriculture ministry virtually issued a compulsory license on Bt cotton using the Essential Commodities Act. It capped the trait fees.  In view of this, a former IAS official, Pravesh Sharma, says government should acquire critical technologies and provide them free to farmers.

That is one way to deal with it. But we can partner from the very beginning and have an understanding on how to share credit, and how to make it (a desirable trait) a thing of public good.

Is there such a mindset in ICAR

This is what our mindset is. Certainly there must be partners who are ready for it. We need to develop more transgenic events than the public system is handling at this time. Also bio-safety study is not easy. The public system can involve the private sector.

Why can’t ICAR do field trials on behalf of the private trait developers?

If I have a sponsored project I will be very happy. For (GM) mustard we did field trials in Punjab, Delhi and Bharatpur. There are a few issues. For event selection and confined field trials, state government NOC (no objection certificate) is required.  What we are planning is create sites, where the selections can happen before it goes to GEAC. When the event is approved we have to again go back to GEAC. We have to see ways and means to relax or rationalise that process.

Have you spoken to the Department of Biotechnology and the ministry of environment?

We are discussing. Two rounds of meetings are over. There is quite a bit of evolution. The agriculture minister says whatever has been approved by the environment ministry for release we will not have difficulty in promoting that.

Agri-biotechnology is an important area of science. Because of the uncertainty are you finding it difficult to attract talent?

This is one point which is being discussed among scientists and also the political leaders. This is a wonderful science, it has tremendous potential.

Sir the world is moving to precision agriculture, also known as the Brown Revolution, where big data and analytics are used to precisely apply nutrients and pesticides.

This country has tremendous IT capability but somehow in big data analysis we have not done so well. The government needs to put in considerable effort in this area. We have huge amount of data from multi-location trials. It is sitting with us for 40-50 years. IT people do not understand biology and big data business. The capability and understanding of theirs in this sector is not good.

The other area is nutrition security which you spoke of at the beginning. One way of achieving this is by diversifying food habits to millets and vegetables. More important are crops that are consumed in plenty.  Rice we consume more than 100 grams every day. Rice eaters are deficient in many things. Protein is low. We have developed high protein rice for the first time through conventional breeding.

What about quality protein maize?

It happened a few years ago. It has high lysine (an amino acid).

But productivity is not high.

You cannot solve all problems in one go. Biology does not work that way.

What about Golden Rice fortified with Beta Carotene for Vitamin A

I do not know when it will go to the consumer. ICAR has it. It is sitting there. The day we get approvals we should do the needful.

Political leaders are wary of agri-biotechnology. ICAR should educate them

This country needs an awareness programme for the public, the political system and even educated people like scientists…even they do not understand.  We have discussed this with the Department of Biotechnology and the National Academy of Agricultural Sciences